2020 in the news: unprecedented in many ways 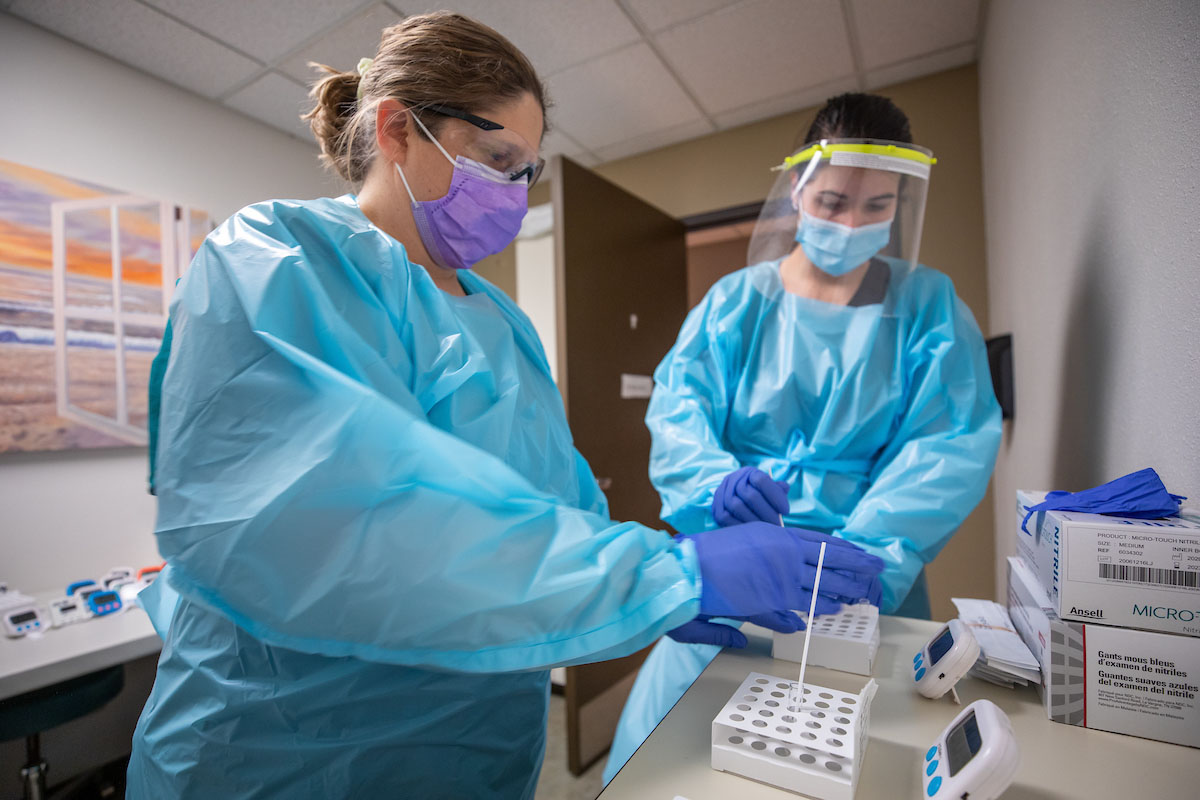 S&T’s student health services staff stayed busy in 2020 testing students for COVID-19 and conducting contract tracing. The pandemic was at the forefront of everyone’s minds in 2020.

It’s become a cliche to refer to all things 2020 as “unprecedented.” But for Missouri S&T, that phrase holds true this year — and not just because of the pandemic. Several firsts — including a milestone anniversary, groundbreaking gifts, a Miner in the NFL and of course our response to COVID-19 — top our list of the most significant Missouri S&T news stories of the year. (Also, a lot of important research happened on campus in 2020, and we’ve compiled a list of those top stories here.)

The largest single gift to any university in Missouri, public or private, came to Missouri S&T in October when civil engineering alumnus Fred Kummer and his wife, June, donated $300 million to establish the Kummer Institute for Student Success, Research and Economic Development. Through the gift, S&T will create a new college of innovation, entrepreneurship and economic development, build on four research areas, provide numerous scholarships and fellowships for students, and bolster the Rolla region’s economy through the translation of new research into needed products, services and jobs. Already, the gift is supporting new scholarships for deserving undergraduates, and will soon also fund a new program for Ph.D. students interested in innovation and entrepreneurship.

The Kummer gift ranks as the fourth-largest single gift to any public university in the nation. But it wasn’t the only record-breaking donation to S&T in 2020. Chemical engineering graduate Bipin Doshi and his wife, Linda, donated $10 million to his home department to establish the Linda and Bipin Doshi Department of Chemical and Biochemical Engineering. It is the largest gift to date to any academic department at S&T.

Another groundbreaking gift that will result in a groundbreaking is also a first: a $5 million donation from petroleum engineering alumnus Tim Bradley and his wife, Kay, to support a new Arrival District for S&T. Also making history were two gifts from history graduates: Cordell Smith’s $250,000 donation in honor of his mentor, the late Dr. Lawrence Christensen, and a $100,000 gift from Dr. Petra DeWitt, a history alumna and faculty member, to support the S&T Collaboratory, a digital humanities lab.

COVID-19’s impact on higher education — and almost every other aspect of life and society — is well documented. Missouri S&T first took notice of the threat in January, when few people had yet heard of the coronavirus that soon would spread across the globe. An S&T student returning from Wuhan, China, where the outbreak began, reported to student health offices with symptoms of COVID-19 but tested negative. Chief medical officer Dr. Dennis Goodman and his team continued to monitor the situation, locally and globally, and by the time federal officials had declared the viral spread a pandemic, Missouri S&T had taken swift action. The university moved all coursework online for the remainder of the spring semester, cancelled St. Pat’s for the first time since World War II, suspended travel and on-campus events, and canceled athletics competitions for the remainder of the semester. The pandemic caused S&T to replace spring commencement with a virtual celebration of graduates and move fall commencement to a fully virtual event. All in-person summer camps were cancelled, but a few transitioned to virtual programming, while summer courses were moved to mostly remote with the exception of a four-week session held July 20-Aug. 14. S&T opened as planned on Aug. 24, but with a mix of in-person, online and hybrid courses.

Despite the stresses wrought by the virus, S&T carried on, often in remarkable ways. Students from S&T’s renowned design teams turned their talents toward helping the community by 3-D printing masks and other protective medical gear. Other design team students reached out to housebound kids with virtual science projects. Donors stepped in to help students by giving to the Miner Resilience Fund, alumni Dr. Sandra Magnus (a retired NASA astronaut) and Maj. Gen. Samuel “Bo” Mahaney held Zoom webinars on dealing with isolation and uncertainty. The summer camps held remotely continued to inspire students, including one camper who filmed her satellite launch. Despite international travel challenges, a group of new graduate students from India arrived in Rolla to find help and hospitality at S&T. Perhaps most noteworthy was the work last spring of Dr. Michael Bruening, associate professor of history, who channeled his frustrations with switching to online teaching into song, creating a music video that went viral — to the tune of over 2 million views.

A Miner in the NFL

It isn’t often that a student-athlete from Missouri S&T moves on into professional sports. But in 2020, S&T defensive lineman Tershawn Wharton, whose standout career as a Miner ended with the fall 2019 season, signed with the reigning National Football League champion Kansas City Chiefs last spring. His performance in training camp was impressive enough to make the Chiefs’ opening day roster. The co-MVP of S&T’s 2018 Mineral Water Bowl victory, Wharton has seen quite a bit of playing time during the regular season, and that trend is likely to continue during the playoffs.

Maybe it wasn’t the ideal year to launch a new program focused on bringing a more global perspective to the S&T curriculum, but the university’s new global engineering program got off the ground in the fall with a strong cohort of students. The program provides engineering students the opportunity to obtain a second degree in multidisciplinary studies with an emphasis on a foreign language, and as a capstone of the program, students will study abroad and hold an engineering internship abroad during their fourth year of this five-year program.

The program is already getting attention. Earlier this month, Jessi Schoolcraft, who is majoring in environmental engineering and multidisciplinary studies, shared her experiences in an interview with the Lead with Languages campaign.

The Rolla of 150 years ago was an unlikely place to establish an institute of higher learning. Yet after some competitive bidding among counties in the mining district of the state, the state legislature selected Rolla as the site for the University of Missouri School of Mines and Metallurgy in 1870. The Missouri School of Mines, or MSM, as it was known then, held its first classes in November 1871, but S&T traces its origins to Feb. 24, 1870. That’s when Missouri Gov. Joseph W. McClurg signed the legislation to create a “school of mines” in south-central Missouri. Fast forward 150 years plus one day, to Feb. 25, 2020, and the university marked the occasion with S&T Day at the Capitol, the first of many events to commemorate the sesquicentennial year.

That was just the beginning of the events and activities associated with this milestone anniversary. A special edition of Missouri S&T Magazine, published in August, focused on the 150th anniversary. A new history book about the university, Forged in Gold: Missouri S&T’s First 150 Years, came out in October. And a big on-campus kickoff event, planned for Homecoming (also in October), moved to the virtual sphere due to COVID-19 restrictions. Nevertheless, Miners around the world still tuned in for the online celebration, and the celebration will continue throughout 2021 as we move toward the 150th anniversary of the first day of classes on Nov. 6. Visit the website 150.mst.edu for more information about coming events and more details about S&T’s history.

For the past century and a half, Missouri S&T has persevered — even thrived — “because every generation of faculty and administrators has embraced the land-grant mission of providing access to higher education for qualified Missourians,” says Dr. Larry Gragg, Curators’ Distinguished Teaching Professor emeritus of history and author of Forged in Gold. “Whatever challenges faced them, faculty members and campus leaders understood the significance of striving to achieve that compelling mission.”

With that history lesson in mind, as S&T completes an unusual, challenging and, yes, unprecedented year, the future holds great promise.