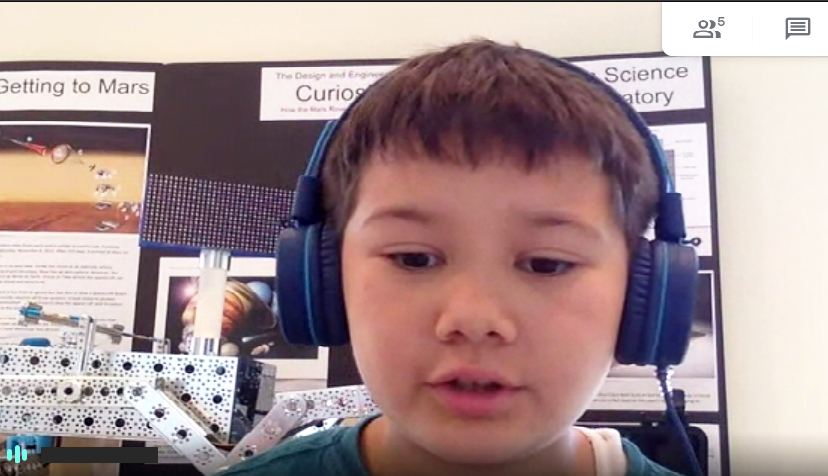 Leonardo Sent, a fourth-grader from California, was one of the curious, homebound children who listened to Missouri S&T’s virtual Mars rover presentations during the coronavirus pandemic school closures. Image courtesy of Delia Croessmann.

“Teaching future engineers and STEM (science, technology, engineering and math) innovators about space exploration is a big part of the Mars Rover Design Team’s mission,” says Téa Thomas, a senior in business and management systems at Missouri S&T from Lake Lotowana, Missouri. Thomas is public relations lead for the team, which is in its eighth year of rover-building for the University Rover Challenge. The international robotics competition is held annually in a barren desert area outside Hanksville, Utah, where the landscape simulates the surface of the planet Mars.

“We want to help parents and teachers who are homeschooling right now and need a break, and the outreach is a lot of fun for us,” Thomas says. “We were all pretty sad when we couldn’t visit the schools and groups like the Boy Scouts and Girl Scouts for our presentations.”

In mid-March, Thomas issued a Facebook invitation to parents and teachers offering virtual outreach sessions about the team’s Mars rover and received an overwhelming response from almost 200 parents and teachers across five countries and 12 U.S. states. She set up four presenters from the 75-member team to share their knowledge throughout the week through various video conferencing platforms. The presenters included seniors Sarah Dlouhy of Lincoln, Nebraska, and Eli Verbrugge of Kirkwood, Missouri, and junior Dan Napierkowski, of Batavia, Illinois, all in computer engineering; and Hollis Hervey, of Union, Missouri, a junior in mechanical engineering. Keyton Rovka, of Wentzville, Missouri, a sophomore in mechanical engineering, created the video the team emailed to those who could not attend the live presentations.

The sessions drew small groups of inquisitive children, mainly ages 6 to 9, who asked questions about the rover’s assemblies, autonomous navigation system, programming languages and wheel construction, as well as its 15 motors. One presenter aptly compared the rover’s ability to traverse the surface of Mars to “walking through a room full of toys without stepping on them.”

“I liked it a lot,” says Sent. “I learned how to use the Mantis suspension and how the many different assemblies you have work inside the body off the Linux operating system.” Sent has already built a rover through NASA’s Jet Propulsion Laboratory (JPL) Open-Source Rover Project, and he created instructional YouTube videos for each assembly.

Other STEM advocates with ties to Missouri S&T are helping sequestered kids manage the pandemic in other ways. Grace Deitzler, a 2016 Missouri S&T biological sciences graduate who is now working on a Ph.D. in microbiology at Oregon State University, reached out to Facebook friends who are parents with an offer to teach their children anything they wanted to learn about science.

Last week, she spoke on video to a kindergartner and second-grader on the timely subject of the life cycle of germs. This week, her customized session with another second-grader is about microorganisms in the ocean and their roles in the coral reef system.

Deitzler advocates scientific representation to children at an early age.

“As a kid, I only knew a few scientists who let me ask questions,” she says. “Kids want to learn, and these sessions are a great opportunity to answer the questions their parents and teachers might not be able to address. I want to show kids what the path to becoming a scientist is like.

“We are all in a difficult situation right now, but it also has a silver lining,” says Deitzler.