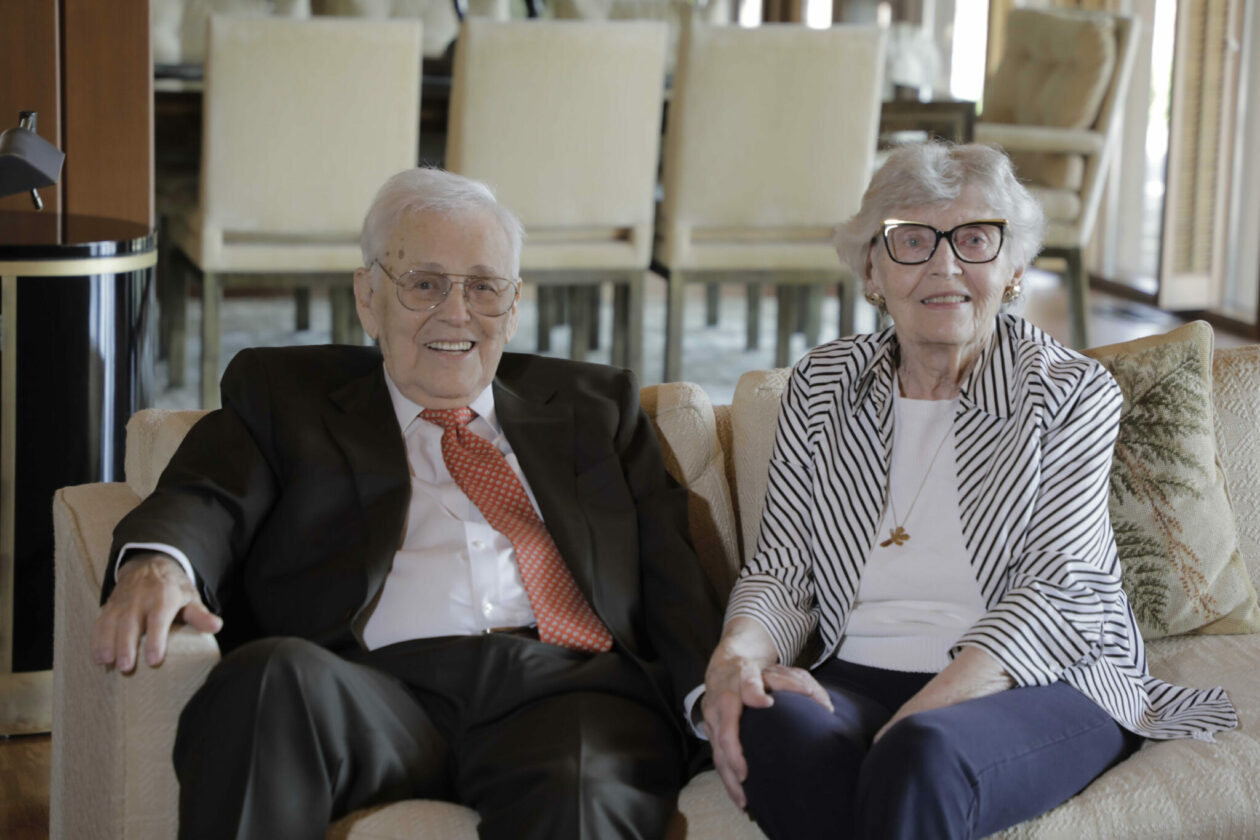 A $300 million gift from June and Fred Kummer will create new scholarships and fellowships for students, new research centers, a new school focused on innovation and entrepreneurship, and new economic development and outreach opportunities. Photo by Terry Barner/Missouri S&T

“Transformative” donation is the largest ever in higher education in Missouri; boost also foreseen for local and state economies

In the largest single gift in the history of Missouri higher education, St. Louis businessman Fred Kummer and his wife June have donated $300 million to a foundation that will support Missouri S&T, the university announced today.

The new gift will enable the university to establish a new college of innovation and entrepreneurship, develop new areas for research, provide numerous scholarships and fellowships for students, and bolster the Rolla region’s economy.

“This gift is transformative for S&T, the Rolla region and our state,” said Dr. Mo Dehghani, Missouri S&T chancellor. “For nearly 150 years, Missouri S&T has been known as the state’s premier technological university. Now, thanks to June and Fred, S&T will have the opportunity to become one of the nation’s leading universities for innovation. At the same time, this gift will make our school a center for entrepreneurship, thereby energizing the economy of the Rolla area and the entire state of Missouri.

“With this gift, we expect to be able to dramatically increase the size of our student body, recruit outstanding new faculty, establish powerful new centers of research, and engage with the community in new and exciting ways,” Dehghani said.

“I owe much of my success to the education I received at Rolla,” Fred Kummer said. “My Rolla experience taught me how to think, how to work hard and how to manage my own career. June and I believe in the mission of this great university, and that’s why we have chosen to invest in S&T’s future success. We believe that Missouri S&T’s best days are ahead.”

Fred Kummer, 91, is the founder and chairman of St. Louis-based HBE Corp., which he established in 1960 and built into the world’s leading design-build firm for health care. He is a 1955 civil engineering graduate of Missouri S&T, which was then known as the Missouri School of Mines and Metallurgy. He and his wife have been major donors to Missouri S&T for decades.

About the Kummer Institute Foundation

The Kummers’ gift will be channeled into a new not-for-profit foundation, The Kummer Institute Foundation. Funds from the foundation will support several new initiatives at Missouri S&T, including:

A new, independent research and development entity. Four new research centers – focused on infrastructure, advanced manufacturing, artificial intelligence and autonomous systems, and environmental and resource sustainability – will stand at the heart of this entity, which will be supported by research space in the Rolla area. The new entity will serve as the university’s node for partnerships with industry, public and private research foundations, and governmental agencies to stimulate business innovation, provide corporate research and development, and develop prototypes for new products.

Scholarships, fellowships and other enhancements

Numerous other new programs and enhancements, including scholarships and fellowships for high-achieving undergraduate and graduate students; expansion of Missouri S&T’s online degree programs; new research faculty positions; expansion and renovation of existing structures; construction of new buildings and labs; and greater community outreach through new initiatives in student-community engagement, a lecture series, and a shuttle service between S&T and St. Louis to bring students from the metropolitan area to Rolla for camps, campus visits and other activities.

“Each of the four centers will build on S&T’s strengths and will leverage existing research expertise, but they will rapidly accelerate our research and development efforts through the addition of new faculty and graduate students, including new Ph.D. Kummer Fellows,” Dehghani said.

The Kummer Institute Foundation is expected to generate $250 million in gross domestic product to the Missouri economy during its first five years of operation and more than $2 billion over 25 years, according to an economic impact analysis conducted by the University of Missouri-Columbia. This impact does not include the potential of spin-off corporations and subsequent job creation that the initial $300 million gift is expected to produce, or the research and development activities to be conducted by the institute’s four research centers.

“As word spreads about this gift and the creation of the Kummer Institute, we fully expect to see additional investment from other donors, corporate partners, research agencies, and the state and federal government,” Dehghani said. The south-central region of Missouri, which includes S&T’s hometown of Rolla, is the most economically disadvantaged of any region of the state, he noted.

“As universities, we have an obligation to spill ourselves over into our communities,” Dehghani said. “This investment will create jobs, new technology and research advances that will energize the economy of our region for decades to come.”

About June and Fred Kummer

June and Fred Kummer have been among Missouri S&T’s most generous donors over the years. They provided the lead gift for the Kummer Student Design Center, which houses Missouri S&T’s 19 student-run design teams. They also supported the expansion in the 1990s of Butler-Carlton Civil Engineering Hall and, in the early 2000s, of Toomey Hall, which houses S&T’s mechanical and aerospace engineering programs. In recognition of June’s passion for landscaping and gardening, the Kummers provided a gift to name the Fred and June Kummer Garden at Hasselmann Alumni House.

A native of New York City, Fred Kummer’s interest in construction and hotel management began early. His father was an engineer with a New York hotel company, and Kummer developed his business savvy in the hotel basement, where he and a high school classmate ran a printing press to create menus for restaurants in other neighborhood hotels. He attended City College of New York before transferring to Missouri S&T.

While in college at Rolla, he worked for a St. Louis architectural firm that had a project there. He met a colleague, June, an architect and graduate of Washington University in St. Louis. He left the university in 1952 to join the Army, married June while in the service and returned to Rolla in 1954 to complete his degree.

Kummer is a past member of the Missouri S&T Board of Trustees and the University of Missouri Board of Curators. The Kummers are founding members of the Order of the Golden Shillelagh, an association composed of S&T’s most loyal and generous donors. In 2011, Kummer was named to Missouri S&T’s Alumni of Influence inaugural class in recognition of his business success and philanthropic contributions.

Kummer founded the company that would become HBE Corp. in 1960 with less than $17,000 in assets. His early design-build construction work included some buildings on the S&T campus, including the Gale Bullman Building and Curtis Laws Wilson Library.

About the governing board

The Kummer Institute Foundation will be governed by an eight-member board of directors. Kummer and Dehghani are board members, along with Dr. Delbert Day, Curators’ Distinguished Professor emeritus of ceramic engineering at Missouri S&T, co-founder of Rolla-based Mo-Sci Corp. and longtime donor to S&T; entrepreneur and Missouri S&T graduate Gary Havener of Fort Worth, Texas, the naming donor of S&T’s Havener Center; Dr. Martin C. Jischke, former chancellor of Missouri S&T and former president of Iowa State University and Purdue University; Joseph D. Lehrer, of counsel with the St. Louis law firm Greensfelder, Hemker & Gale; Dr. George P. “Bud” Peterson, former president of Georgia Institute of Technology; and Missouri S&T graduate Dr. Joan Woodard, a retired senior executive at Sandia National Laboratories and naming donor of the Woodard Endowed Professorship. Havener and Woodard are members of the Missouri S&T Board of Trustees.

Founded in 1870 as the Missouri School of Mines and Metallurgy and later known as the University of Missouri-Rolla, Missouri University of Science and Technology (Missouri S&T) was one of the first technological institutions west of the Mississippi and one of the first in the nation. Missouri S&T offers 99 degrees in 40 academic disciplines, from engineering and sciences to the liberal arts, humanities, education, and business and information systems. Missouri S&T is well known for providing a great return on investment (ROI) for students, and its engineering programs are ranked third by College Factual for ROI. The university will begin a yearlong celebration of its 150th anniversary later this month. Learn more at www.mst.edu.