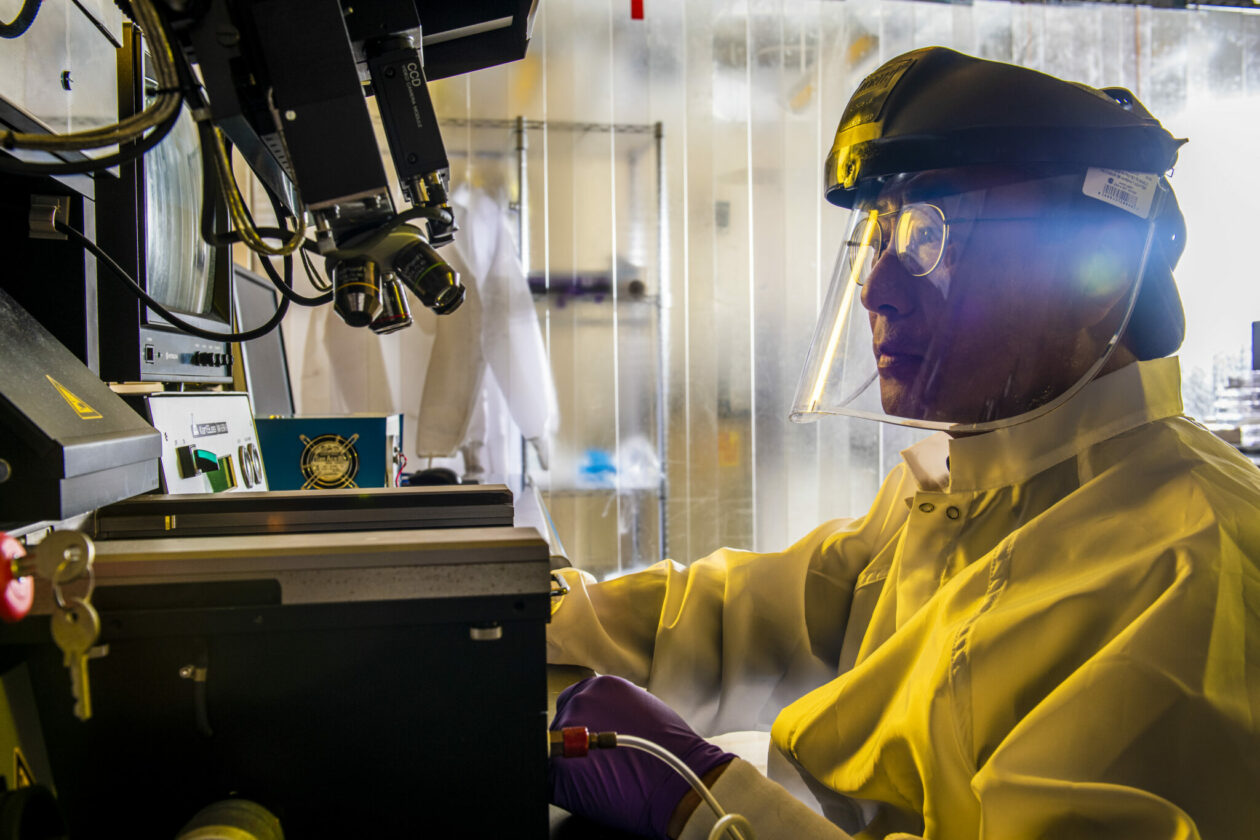 Dr. Chang-Soo Kim and his research team at Missouri S&T have received a patent for resorbable medical implants that are used for diagnosis and treatment. The implants are produced with bioactive glass and metals and are the first resorbable implants to use inorganic materials. Photo note: Amber/yellow lighting is used in the lab to prevent degradation of photosensitive chemicals used during device fabrication. Photo by Michael Pierce, Missouri S&T.

Medical devices made of bioactive glasses and metals that dissolve at the end of their operational lifespan could replace other types of implants and eliminate the need for invasive removal once they have served their purpose, say researchers at Missouri S&T.

The Missouri S&T researchers recently received a patent for their implant.

“Glass is an excellent material for packaging and substrate layers in implanted solid-state devices including sensors and actuators,” says Dr. Chang-Soo Kim, professor and graduate coordinator of electrical engineering at Missouri S&T. “Depending on the combination of materials, you can develop a bioactive glass that degrades very slowly or very quickly, based on the required operational time for the device.”

As lead researcher on the project, Kim worked with Dr. Richard Brow, Curators’ Distinguished Professor of ceramic engineering and interim deputy provost for academic excellence at Missouri S&T; and Dr. Delbert Day, Curators’ Distinguished Professor emeritus of ceramic engineering and inventor of bioactive glasses for cancer treatment, bone tissue regeneration and wound healing. Kim designed the electrical functions of the devices, and Brow and Day designed the glasses used in the implants. Dr. Matthew O’Keefe, a former professor of metallurgical engineering at S&T, also contributed to the research.

The resorbable implants benefit patients, Kim says, because they eliminate the need for additional surgery to remove a sensor or other functional device after it is no longer needed. He says that is especially important because biodegradable devices are designed to be implanted in the brain or other organs deep inside the body. Kim says the implants can also be used for drug delivery or tissue healing.

“Bioactive glasses are a unique strength of Missouri S&T,” says Dr. Costas Tsatsoulis, vice chancellor of research and graduate studies at S&T. “Since Dr. Day received a patent in 2002 for glass microspheres used in radiation therapy, new bioactive glasses have played an important role in healing and medical therapy.”

The implant patent is available for licensing through Missouri S&T’s Technology Transfer and Economic Development office. For more information on licensing, contact John Woodson, interim director of technology transfer and economic development, at 573-341-7544 or email jwoodson@mst.edu.