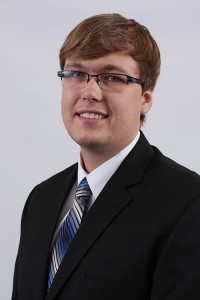 As part of the award, Horst will receive a stipend for three years to cover research and tuition costs. Horst can choose which three years to accept funding over a five-year period.

“This award is not only a great honor for Matt, but also for the entire university as it recognizes the quality of education our students receive at Missouri S&T,” says Dr. Reza Zoughi, the Schlumberger Distinguished Professor of Electrical Engineering at Missouri S&T and Horst’s advisor. Zoughi is director of the Applied Microwave Nondestructive Testing Laboratory (AMNTL) at Missouri S&T.

Horst’s research is focused in microwave and millimeter-wave nondestructive testing methods. He is currently helping to develop a 3-D real-time wideband microwave camera capable of producing 3-D images through the AMNTL on campus.

The 3-D real-time camera is a non-invasive way to evaluate the structural integrity of composite structures used in transportation and infrastructure among other uses. Horst also hopes that the same imaging technology can be used to diagnose cancers and evaluate the damage and healing process of burns.

The camera is expected to detect defects in space habitat structures. It can also be used to address other critical inspection needs from evaluating composite-strengthened concrete bridge members to effectively addressing security needs at airports and sporting events by detecting concealed contraband.

“This camera will hopefully have applications in engineering, biomedical and security endeavors,” Horst says. “We’re hoping it will be able to analyze the depth of skin burns and skin cancer, image through backpacks and luggage for security purposes, and detect flaws in manufacturing by imaging through materials like wood, concrete and rubber.”

Horst plans to stay at Missouri S&T until he has completed his master’s degree and his work with the 3-D real-time microwave camera. He says the camera is currently being tested and refined and will be finished by the end of the semester.

“Though the camera was built as a result of a team effort, it’s my responsibility to continue testing the camera and calibrating it to produce the best possible image,” Horst says. “I am also researching possible design improvements that will become a portion of my thesis.”