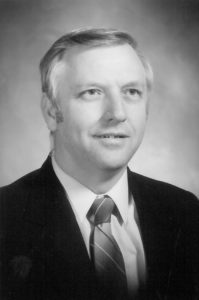 Gale joined the faculty in 1968 and reintroduced biology to the university after its curriculum was discontinued in the 1940s. Initial courses were offered as part of the chemistry curriculum. The life sciences department was formed in 1983, and Gale was appointed chair.

Gale served on the S&T faculty for 32 years until his retirement during the 1999–2000 academic year. Under his leadership, the department grew from a faculty of two – himself and Dr. James Hufham – to 11 full-time academic positions.

Gale’s research area was in bacterial physiology when he arrived at S&T, but he soon became involved in research on heavy metals in aquatic organisms in Missouri’s Lead Belt. He was well known among rural Missouri residents for his efficient method of sampling streams and ponds by “electrofishing.”

Gale was a pioneer in involving undergraduate students in research. He was rarely seen working on any project without a team of students nearby, whether in the field or lab.

During his time at S&T, Gale received 18 Outstanding Teaching Awards and the Governor’s Award for Excellence in Education and was named Curators’ Distinguished Teaching Professor. One of Gale’s final accomplishments before retirement was writing the proposal that ultimately established a graduate program in biology.

On February 13, 2019. Posted in College of Arts, Sciences, and Business, News