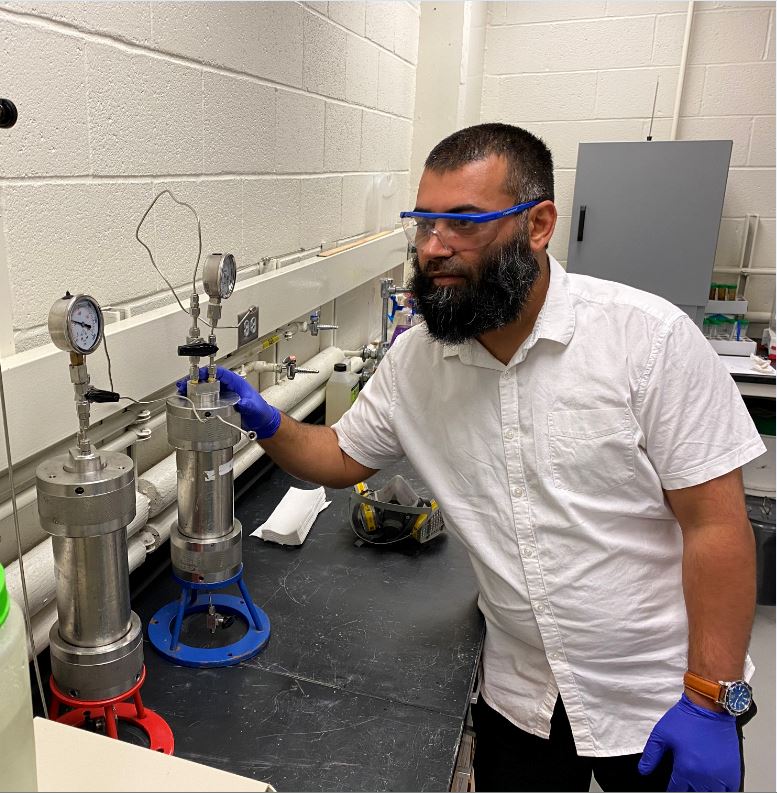 Dr. Imqam works in his laboratory at Missouri S&T. Photo submitted by Imqam.

Missouri S&T researchers are working to increase the amount of shale oil produced in the United States while reducing the need to drill new wells. They hope to develop a new model to mitigate the formation of heavy organic solids found in the oil during extraction and as a result, make the U.S. more energy independent.

With a $410,000 grant from the National Science Foundation, researchers hope to create a process that is capable of improving oil recovery at shale oil reservoirs. The work would optimize the gas injection process that decreases the energy needed for oil extraction and reduces the need to dig new oil wells.

“In recent years, the development of unconventional oil reservoirs has played a critical role in the rapid increase of oil production in the United States, which in turn decreases dependence on foreign oil,” says Dr. Abdulmohsin Imqam, research lead and an assistant professor of geosciences and geological and petroleum engineering at Missouri S&T. “To better utilize these reservoirs, the industry must develop more efficient methods of producing oil from them.”

Unconventional oil reservoirs such as shale can be tapped using hydraulic fracturing in horizontal wells, but this method typically recovers only 4 to 6% of the available oil. Gas injection methods are also currently limited due to the oil properties that change during injections, with the main issue being the buildup of heavy organic solids called asphaltenes.

“When the deposition of asphaltenes occurs, it ultimately requires more wells to be drilled, as it reduces rock permeability, damages the formation, and plugs the formation pores and well tubing,” says Imqam. “Our project works to predict optimum injections and recover oil more efficiently.”

Imqam also says that current models cannot fully describe how all the extraction factors affect asphaltene buildup, and that is holding back oil production and recovery. He hopes that the new model his team is developing can improve the ratio of “energy returned on energy invested” that is used to measure the viability of shale oil recovery locations.

“The newly developed model from this project will be the first of its kind that combines thermodynamic and kinetic descriptions of asphaltene aggregation in one model,” says Imqam. “These research efforts will lead to a new, simple, accurate, and universal mathematical model that can be used to minimize asphaltene.”

Founded in 1870 as the University of Missouri School of Mines and Metallurgy, Missouri University of Science and Technology (Missouri S&T) is a STEM-focused research university of more than 8,000 students and part of the four-campus University of Missouri System. Located in Rolla, Missouri S&T offers 99 different degree programs in 40 areas of study, including engineering, the sciences, business and information technology, education, the humanities, and the liberal arts. Missouri S&T is known globally and is highly ranked for providing a high return on tuition investment, exceptional career opportunities for graduates, and an emphasis on applied, hands-on learning through student design teams and cooperative education and internship opportunities. For more information about Missouri S&T, visit www.mst.edu.