A conversation on women in STEM 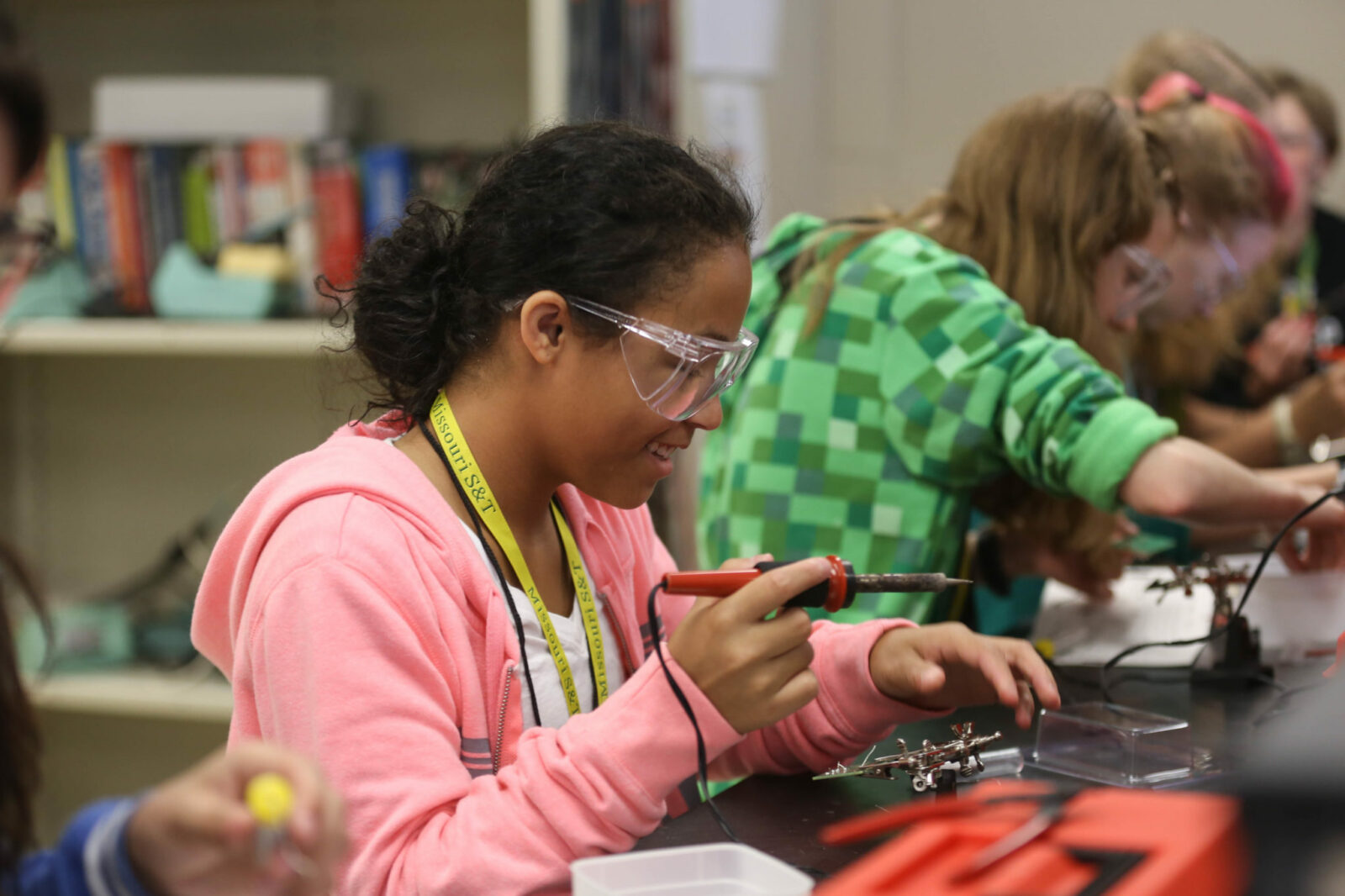 This is the second in a series of articles about campus climate issues that were brought to light by the university’s campus climate survey, the results of which were presented in September 2017.

In 1962, James Watson and Francis Crick won a Nobel Prize for determining the structure of DNA. But they couldn’t have done it without Rosalind Franklin, a physical chemist who used X-ray crystallography to make images of DNA.

Marie Curie, a pioneer in radioactivity research, was the first woman to win a Nobel Prize, the first person (and only woman) to win it twice and the only person to win in two different sciences — chemistry and physics.

In the 1800s, astronomer Caroline Herschel became the first woman to discover a comet and the first to have her work published by the Royal Society.

Throughout history, women like these have made significant scientific breakthroughs. But their stories aren’t always the ones that appear in K-12 textbooks. Has this lack of visibility of women scientists, engineers and mathematicians – and the lack of female role models in the physical sciences, technology, engineering and math (STEM) fields – contributed to the low numbers of women in STEM?

According to the National Science Foundation, women make up less than 25 percent of the workforce in STEM fields. And even though 56 percent of college students on U.S. campuses are female, only 25 percent of women earn bachelor’s degrees in those areas.

It may seem that women are simply choosing not to pursue math-intensive STEM careers, but Dr. Jessica Cundiff, an assistant professor of psychological science at Missouri S&T, says these choices are influenced by implicit STEM-male stereotypes that may have been unconsciously ingrained since childhood.

Writing in the recently published book The War on Women in the United States: Beliefs, Tactics, and the Best Defenses, Cundiff cites several factors that limit women’s involvement in STEM and suggests educators and practitioners could help break stereotypes by using diverse images to represent these fields – and providing mentorship through exposure to female role models in STEM.

“Female role models provide women with accessible models for achieving success in STEM, enabling women to imagine themselves in STEM roles and the pathways to get there,” Cundiff writes. “Of course, role models will be most effective when they are perceived as similar to the women they aim to inspire and are fully integrated into the curriculum.”

Missouri S&T’s enrollment reflects the national data with an on-campus female enrollment of 24 percent. And S&T is working to provide them with female role models.

According to the most recent Missouri S&T Fact Book, 22 percent of S&T’s tenured or tenure-track faculty are female.

As the recent campus climate survey indicates, many of those female faculty in male-dominated STEM fields have experienced challenges because of their gender. But this is not unique to S&T.

She documented stories of what is known as “casual” discrimination, including demeaning remarks that continue to sting years later; diminished expectations by classmates, professors, coworkers and supervisors; and in the most severe cases, sexual harassment and sexual assault.

Stanley culled those conversations to 26 monologues and compiled them into an original play, The STEM Monologues, which was first performed on the Leach Theatre stage last fall.

“Everyone’s story is different,” says Stanley. “Sometimes they’re funny, with a lot of laughter. Sometimes you just want to cry. Sometimes you learn things you would never have known, particularly as a male, about what women go through.”

So what do women go through at Missouri S&T? And what do they think are the biggest challenges for women in STEM generally?

“Unconscious bias that women are less qualified than men to study or teach STEM disciplines still exists,” says Dr. Francisca Oboh-Ikuenobe, professor of geology and biological sciences at Missouri S&T. “This leads to the lack of respect female instructors in STEM fields face from some students in and outside the classroom, and also from some colleagues.

“Over the years, I have counseled several young women who felt they were ‘not good enough’ to succeed,” says Oboh-Ikuenobe. “I often find out that some of these students were not encouraged or advised to pursue STEM subjects in high school, or to consider careers in STEM fields.”

Oboh-Ikuenobe points to research indicating that, “unlike their male colleagues, most female students and scientists lack the tenacity needed to succeed in STEM fields – they tend to give up easily if they fail at something.”

“The women who persevere go on to achieve great successes in their STEM careers,” she adds. “S&T has put many structures in place to ensure that women in STEM fields succeed.”

Oboh-Ikuenobe has experienced similar challenges in her own career.

“I have been perceived sometimes as being too aggressive when doing my job – be it research, teaching, service or administrative duties,” she says. “A male colleague would probably not be judged in the same light, and other women I know have experienced this.

“The perception that I have advanced in my career because of my gender and race is one that has also come to my attention,” says Oboh-Ikuenobe. “Resilience has kept me going, in addition to the support I have received from several male and female colleagues, students and my bosses.”

“I think the two biggest challenges women in STEM face are the dual-career problem, and the combination of career and family with all the associated child care issues,” says Dr. Agnes Vojta, associate teaching professor of physics at Missouri S&T. “These are universal and not specific to S&T.”

Vojta overcame those challenges in her own family by forgoing a tenure-track career.

“When the physics department at S&T hired my husband (Dr. Thomas Vojta, chair and professor of physics), they hired me as a part-time adjunct to teach recitations, a solution that was a good fit for our family situation at that time,” Vojta says. “As my children got older, I was able to increase hours and responsibilities, and am now a non-tenure track associate teaching professor.”

When Dr. Susan Murray took her first engineering job, she was the first – and only – female engineer.

“I constantly had to prove myself,” says Murray, chair of psychological science at Missouri S&T. “Some of the barriers were sexist (assuming I was a secretary, saying that I only got the job because I was a woman, or doubting I had a real degree), and some were simply good intentions (we can’t cuss in front of her, or we can’t give her that difficult job). Luckily once I proved myself, these battles diminished.”

Murray believes the barriers to females in STEM are more subtle today.

“When I started as an engineering faculty member in 1994, I had to constantly let people know I was a faculty member,” Murray says. “The assumption was that I was a graduate student or a staff member.”

Murray was often asked to serve on committees and perform other work that, while important to the university, doesn’t help a junior faculty member progress in his or her career.

“Often the administrator asking me to do these things wanted diversity on the committee or wanted to make sure the concerns of female students were heard, but due to the very limited number of women faculty, these obligations fell disproportionately to me and the handful of other women,” she says.

Faculty aren’t the only ones who face these challenges. Female students also experience bias and discrimination.

“I would say that my biggest challenge as a woman in STEM at S&T has been that I’m usually the only one in a lot of classes and lab groups, so it can be very lonely at times,” says Madison Moore, a senior in architectural engineering and incoming Student Council president. “Sometimes the men can kind of take over situations because they have so little experience with women being in charge. It is frustrating to deal with, but it has definitely made me stronger, and I take pride in the way I deal with those situations now.”

“The biggest challenges I have faced at S&T were not being taken seriously in group design projects and being told that I could do the decoration at the end, rather than design the actual project,” says Alyssa Nelson, a senior in chemical engineering at Missouri S&T and president of the Society of Women Engineers.

“I think the biggest challenge faced by women in STEM is being taken seriously or having their work taken seriously,” Nelson says. “They have to prove themselves in stronger ways than men do in the same field often. I think that huge strides are being made, but there is always room for improvement.”

“Here at S&T, we showcase strong women who thrive in the world of engineering and math, but without mentioning the gender discrimination that many of us will eventually face,” says Elissa Rivers, a senior in engineering management and president of Panhellenic Council.

“Although all graduated students will feel the need to prove themselves in their career, I think the pressure women put on themselves is far greater due to the challenges we encounter as women in a largely male-dominated field,” Rivers says. “I believe that if women truly understood their degree field and the hurdles that come with it, we could all be more prepared to begin life after graduation.”

As Cundiff writes, we all have a responsibility to change the status quo.

“Even when bias is unconscious, that does not absolve us of responsibility; we have a responsibility to interrupt unconscious bias and minimize its effects on our behavior,” writes Cundiff. “By critically examining and rethinking business as usual, we can better recognize hidden barriers and work to interrupt the processes that prevent talented individuals from pursuing and succeeding in STEM.”

On March 30, 2018. Posted in College of Arts, Sciences, and Business, College of Engineering and Computing, Featured, News

One thought on “A conversation on women in STEM”