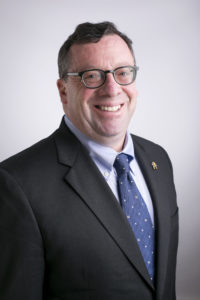 Dr. Ian Ferguson, professor of electrical and computer engineering at Missouri University of Science and Technology, was named a fellow of the Royal Society of Arts (RSA) in June.

The RSA – formally known as the Royal Society for the Encouragement of Arts, Manufactures and Commerce – was established in 1754 in London to enrich society “through ideas and action.” The organization focuses on supporting innovation in creative learning and development, public services and communities, and enterprise and manufacturing. The 28,000-member RSA fellowship’s members have included several notable luminaries throughout history, including Adam Smith, Benjamin Franklin, Charles Dickens and Stephen Hawking.

Ferguson was recognized by the RSA for his entrepreneurial mindset in academia, industry and the non-profit sector. His research has contributed to the development of next-generation solar and solid state lighting and has resulted in more than 480 scholarly publications. Ferguson’s work has also contributed to the development of light-emitting diode (LED) semiconductors, which are now part of a $1 billion-a-year industry. He also co-founded a green business incubator – PiES, or the Project for Innovation, Engineering and Sustainability, based in Davidson, N.C.

“As a fellow of the RSA I support its core values of creativity, inclusivity and responsibility focused on finding innovative and practical solutions to today’s social challenges,” Ferguson says.

Ferguson served as vice provost and dean for the College of Engineering and Computing at Missouri S&T from August 2014 through the fall of 2015. He previously served as professor and chair of electrical and computer engineering at the University of North Carolina at Charlotte from 2009 to 2014.

A native of Scotland, Ferguson also led a cluster group for renewables and energy efficiency at UNC Charlotte and was a member of that university’s Energy Production and Infrastructure Center implementation team. Previously, he was a professor of electrical engineering at Georgia Institute of Technology. He began his academic career as a research scientist in the Interdisciplinary Research Center on Semiconductor Materials at Imperial College in London.

On June 30, 2017. Posted in College of Engineering and Computing, Electrical and Computer Engineering, People