Researchers at Missouri University of Science and Technology are creating a new approach to reconstruct 3-D full-color holographic images by using just one layer of nanoscale metallic film. This work has a huge potential to change our daily lives by equipping our cell phones with 3-D floating displays and printing 3-D security marking onto credit cards. 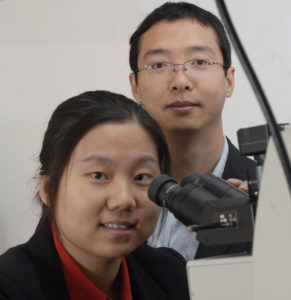 Dr. Xiaodong Yang, an assistant professor in mechanical and aerospace engineering at Missouri S&T, and Dr. Jie Gao, an assistant professor of mechanical and aerospace engineering at Missouri S&T, describe their ultrathin full-color holograms in “ACS Nano.” And they illustrate their approach by reproducing several full-color holographic images with nanometer-scale aluminum thin films. A nanometer is one billionth of a meter, and some nanomaterials are only a few atoms in size.

The method described in the “ACS Nano” article “Full-Color Plasmonic Metasurface Holograms” involves the use of ultrathin nanometer-scale metallic films with metasurfaces that can manipulate the wavefront of light. The researchers’ metasurface hologram is one 35-nanometer thick aluminum film punctured with tiny rectangular holes of 160 nanometers by 80 nanometers with different orientation angles created by a microfabrication process known as focused ion beam milling.

Experimenting with the interplay of red, green and blue laser light on metasurface structures, the researchers demonstrated “clean and vivid full-color holographic images with high resolution and low noise.” The three primary colors — red, green and blue — were produced, and the secondary colors of cyan, magenta, yellow and white also were produced. To illustrate their reconstructed holographic images, they made “CMYW” letters, an apple and a Rubik’ cube. They believe the metasurface hologram holds promise for future applications, such as credit card security marking, biomedical imaging, 3-D floating displays and big-data storage.

“By adjusting the orientation angle of the nanoscale slits, we are able to fully tune the phase delay through the slit for realizing the phase modulation within the entire visible color range,” says Yang. “In addition, the amplitude modulation is achieved by simply including or not including the slit. Our holograms contain both amplitude and phase modulations at nanometer scale so that high resolution and low noise holographic images can be reconstructed.”

The researchers created the metasurface hologram by drilling out tiny rectangular slits with various orientation angles through the aluminum thin layer. Under a scanning electron microscope, the hologram looks like a needlepoint pattern.

“Different from the currently existing metasurface holograms which are mostly designed for limited colors, our wavelength-multiplexed method — by encoding additional phase shifts into the holograms and introducing tilted incident angle illumination of laser light — results in the successful reconstruction of almost all visible colors,” says Gao, co-author of the paper.