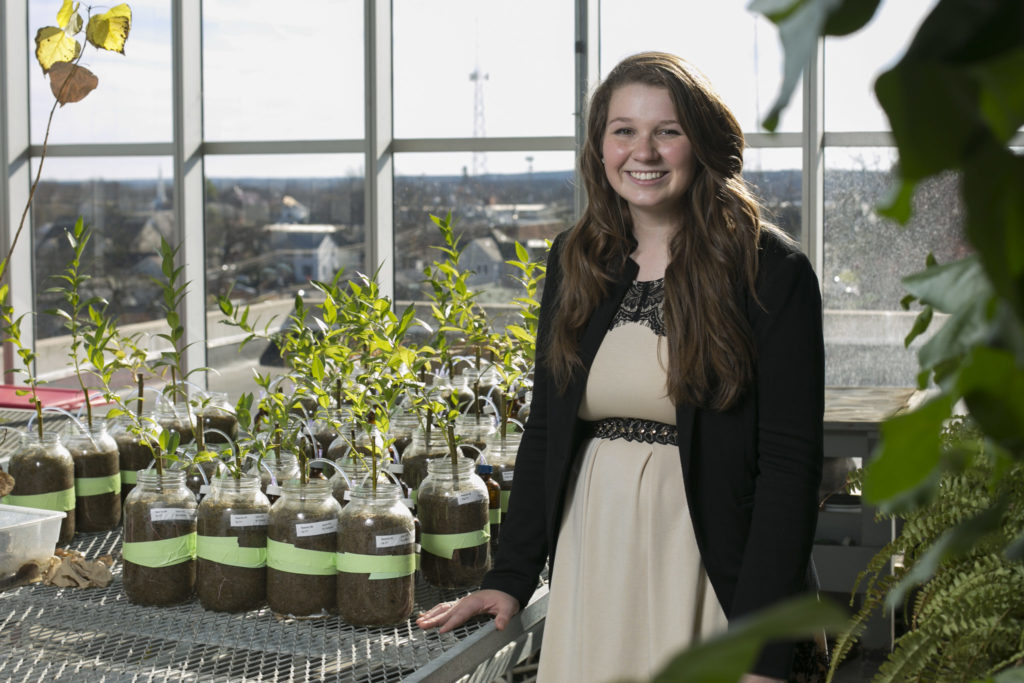 There are few places that have better summers than the United States’ Pacific Northwest. Mild temperatures, clear days, low humidity — and no rain.

The official title of her work is “Ecosystem Services of Pacific NW Salt Marshes: Nitrogen Removal.” Salt marshes, Bartels says, are wetlands that have the natural ability to capture and use nutrients, such as nitrogen, before they enter oceans, reducing the potential for the water to become eutrophic. Eutrophic means the water is rich in nitrates, phosphates and organic nutrients that promote a proliferation of plant life, especially algae.

“Nutrient pollution is a major problem and is best exemplified by the ‘Dead Zone’ that occurs in the Gulf of Mexico caused by the agricultural runoff from the Midwest,” Bartels says. “The salt marsh I will be studying is in Tillamook Bay, Oregon. In this study, the goal is to characterize the hydrology and soil composition of the bay to see if the conditions are suitable for denitrification, which removes nitrogen from the system.”

Her work with the EPA builds off of studies she has performed at Missouri S&T. On campus, Bartels studied the volume and quality of storm water saved by the green roof on top of Missouri S&T’s Emerson Electric Co. Hall with Dr. Joel Burken, Curators’ Professor of civil, architectural and environmental engineering, and Dr. Eric Showalter, associate teaching professor of construction engineering.

Although the green roof absorbs a lot of storm water, the water that is washed out has much higher concentrations of nitrogen and phosphate than a typical roof.

“Seeing Katie work on this topic is exciting as ‘Manage the Nitrogen Cycle’ is one of the 14 grand challenges put forth by the National Academy of Engineering,” Burken says. “With Katie already doing research on urban nitrogen cycles at S&T and now doing watershed research in the same area, she is pretty unique in her knowledge and experience in an area of global interest. Finding solutions to these challenges will take policy based on integrated scientific and technological approaches.”

Bartels says she picked this research because it gives her a chance to study a type of hydrology that she otherwise probably would never have learned about.

“Being from the Midwest, oceanography is not often emphasized, and we mostly are only taught about the hydrology of rivers,” she says. “Since marshes provide a natural technique to mitigate nutrient pollution, I was really interested if it could be applied to the research that I conduct at Missouri S&T, which involves urban hydrology, green roofs and nutrient pollution.”

Bartels’ fellowship provides $30,000 for up to two years and the summer internship at an EPA facility where she can work alongside EPA’s engineers and scientists. Her internship ends Aug. 10.

The 34 students who received the fellowships are pursuing degrees in environmental science and other related fields, including engineering, environmental health and the physical sciences. Since its inception in 1981, the GRO Fellowship program has awarded more than $13 million in funding to nearly 400 students. Bartels is the sixth Missouri S&T student to earn this fellowship.

“With the help of this funding, undergraduates will be able to explore their passion in environmental science and cultivate their research skills,” said Thomas A. Burke, EPA science advisor and deputy assistant administrator of EPA’s Office of Research and Development. “These fellows are the next generation of scientists, who will help lead the way in protecting the environment and public health.”