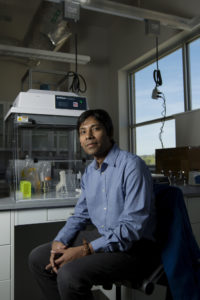 Researching ways to cure cancer and neurodegenerative diseases in the lab is painstaking, time-consuming and expensive. But a Missouri University of Science and Technology professor is using computer modeling to test drug therapies that one day could lead to cures for these conditions that kill millions each year.

Dr. Dipak Barua, assistant professor of chemical and biochemical engineering at Missouri S&T, is the principal investigator on a project funded with a Department of Energy grant for $112,377 on “countering pathogen interfaces with human defenses.”

“We use math and computational modeling as a tool to understand the mechanisms in cells, and we develop computational and mathematical models that make predictions” about what will happen with different therapies, Barua says.

Based on 2012 data, the World Health Organization (WHO) reported in 2015 that approximately 8.2 million people worldwide die each year from cancer — and the number of new cases is expected to increase by 70 percent in the next 20 years. Neurodegenerative diseases such as Alzheimer’s disease, Parkinson’s disease and amyotrophic lateral sclerosis (ALS) combined affect 220.5 people per 100,000 people worldwide, according to the WHO.

Finding a way to treat or cure these diseases is a worldwide concern, and that starts at the cellular level.

“Our human cells respond and fight when our bodies get infected,” Barua says. “We get disease symptoms, and there are interactions at the cell level. Cells get triggered to fight pathogens.”

Barua uses models based on published scholarly literature of drug therapies as a starting point when running the tests. Published work on how drug therapies affect proteins in cells is one course of study. And unlike lab tests that can take months or years to complete, Barua’s trial-and-error research takes hours, days or weeks to eliminate one avenue or identify one for further study.

One benefit Barua expects is to advance the science and create knowledge about how cells function and how scientists can control those functions.

But that’s not the only reason to do the research.

“Our ultimate goal,” Barua says, “is to make cells be able to kill their particular infection.”