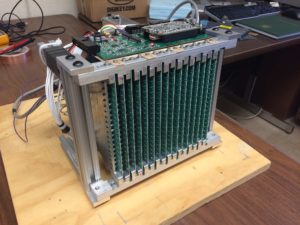 Missouri S&T researchers have produced a 3-D microwave video camera that is small and portable, making it easy to use in many applications.

The Missouri S&T team has developed a microwave 3-D video camera that can be used for industrial inspection applications, security screening — and might even one day be used by first responders. Dr. Mohammad Tayeb Ghasr, assistant research professor at Missouri S&T, and Dr. Reza Zoughi, the Schlumberger Distinguished Professor of Electrical Engineering at Missouri S&T, are the lead researchers on the project.

“It’s like an airport scanner but much smaller,” Ghasr says. “It’s portable, so it can be used on-site wherever it is needed.”

Unlike X-ray inspection systems that could be hazardous, the microwave camera uses low-power non-ionizing electromagnetic waves, which are safe. Given the relatively high and wide range of operating frequencies, it can produce high-resolution 3-D images. This, combined with fast electronics, enables data collection at a rate equivalent to 30 image frames per second, rendering it a real-time imaging system.

The camera is ideal for inspection of composite structures that are increasingly used in the transportation, infrastructure, space, aerospace and other similar industries. Because microwave signals can penetrate non-metallic materials, this system is expected to find significant use in inspecting ceramics, fiberglass, plastics and high-density polyethylene pipes.

The combination of portability, 3-D and real-time image production capabilities and low power consumption make it an ideal tool for high-throughput screening environments such as stadiums for contraband detection.

In the future, Ghasr also sees its potential use by first responders, especially those dealing with burn victims. The microwave camera, when designed optimally, has the potential to diagnose the severity of a burn so medical personnel can apply the appropriate treatment quickly and safely.

The project was funded in part by the University of Missouri System Fast Track program that provides up to $50,000 per an accepted proposal. This program is intended to enhance the four universities’ research discoveries by moving them down the commercial pipeline, toward patents and license agreements.