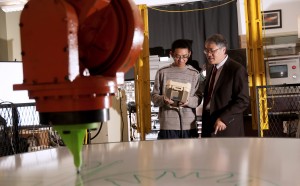 Professor Frank Liou, right, is working with professor Jagannanthan Sarangapani to use 3-D printers to make new materials that are not currently in existence.

Dr. Frank Liou, the Michael and Joyce Bytnar Professor of Product Innovation and Creativity at Missouri S&T, and Dr. Jagannanthan Sarangapani, the William A. Rutledge-Emerson Electrical Co. Distinguished Professor of Electrical and Computer Engineering at Missouri S&T, are developing cyber manufacturing technology for 3-D printers to create materials not currently in existence.

Liou and Sarangapani received a $146,758 grant from the National Science Foundation to support their research.

Structural amorphous metals (SAMs) are made through cyber-enabled additive manufacturing. Researchers us a laser to melt blown powder metal, which is deposited layer by layer to create whatever object is programmed into their computers. The trick is to get the cooling rate correct so that the metal is amorphous — that is, randomly constructed at the cellular level — instead of the natural state of crystalline formation.

Because they’re random like grains of sand on a beach, SAMs are harder, stronger and have more fracture toughness than metals in their natural state. Whereas a crystalline metal will break along its orderly cellular structure, an amorphous metal has no pattern and thus will resist breaking.

“The smaller the grains, the stronger it is,” Liou says.

Liou also says it might be possible to make a new material with 10 times the strength of a conventional one, which would mean 10 times less material would be needed to get the same strength. And that lowers the weight, size and production costs.

“If you can have the next breakthrough in materials,” Liou says, “you can have a lot of changes.”

Functionally gradient materials (FGMs) combine two metals that don’t combine easily, such as stainless steel and titanium or copper and steel. Properties of individual metals, such as thermal conductivity and mechanical strength, might be needed for an aircraft or spaceship part. “NASA is very interested” in the technology, Liou says. Sponsored by NASA’s Langley Research Center in Virginia, Liou is also working with Dr. Joseph Newkirk, associate professor of materials science and engineering, on FGM-related research.

To make the FGMs so that there is, for example, 100 percent copper on one side and 100 percent titanium on the other, the researchers have to blend them by using other metals to bridge the gap. When done, the new material — which doesn’t appear in nature — exhibits the traits of copper and titanium.

But because they’re also made with the laser, they’re formed in extreme heat.

“It’s a race with the cooling rate,” Liou says. “If you can be faster than the microstructure formation or the chemical reaction, you can fuse two metals together easily.”

On September 24, 2015. Posted in College of Engineering and Computing, Electrical and Computer Engineering, Featured, Research