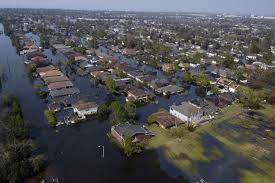 A Missouri University of Science and Technology professor has defined the elements that led to the flooding of New Orleans after Hurricane Katrina and has established a clear sense of responsibility in the levee system’s failure.

Dr. J. David Rogers, Karl F. Hasselmann Missouri Chair in Geological Engineering and associate professor in geosciences and geological and petroleum engineering at Missouri S&T, was lead researcher on a paper recently published in Water Policy law journal titled “Interaction between the U.S. Army Corps of Engineers and the Orleans Levee Board preceding the drainage canal wall failures and catastrophic flooding of New Orleans in 2005.”

The journal article focuses on the U. S. Army Corps of Engineers and its lack of external peer reviews that allowed for faulty flood walls to be installed in the city. It pinpoints the key factors that led to the walls’ failure and the actions taken years before the disaster that allowed the engineering oversights to occur.

“As more information has emerged from the time of the disaster and its prior decision-making processes, new details allow us to have a better idea of the situation and what led to the various levee failures,” says Rogers. “This article is meant to put the record straight about the conclusions people drew from the disaster, many of which were based on incorrect information.”

Rogers and his co-authors contend that the main fault in the failure of the flood walls along the city’s principal drainage canals was the misinterpretation of a full-scale load test carried out by the Corps in the Atachafalaya Basin a few years prior to Katrina. After these so-called E-99 tests, it was determined that flood walls in the city should be installed at a depth of 17 feet, instead of the initially estimated depths of 31 to 46 feet. This decision was made partially with the city’s budget in mind, and also through a mistaken interpretation of the test results, in part because a heavy cloth tarp covered the gap that formed between the sheet-pile supports and the ground during the test. The tarp was there as a safety measure and its inadvertent impacts were not accounted for during the tests.

“After Katrina, there was a lot of finger pointing going on,” says Rogers. “The Corps, the Orleans Levee Board and various political factions all had a different story to tell. Reviews of the minutes of actual board meetings were crucial in unraveling what people were thinking at the time, and how their principal focus was on other aspects of the flood protection system, of which the flood walls were just one untried piece.”

The journal article states that critics forget that the Corps had built thousands of miles of levees along rivers throughout the nation that functioned adequately. The flooding that killed 1,836 people in New Orleans and caused billions of dollars in property damage might have been prevented if the Corps had retained an external review board to double-check its designs of the new flood walls, built in the 1990s and early 2000s, says Rogers.

Legal responsibility for annual upkeep and inspection of the flood protection system rested with the Corps. The article’s authors hope to set the record straight with respect to the critical role played by the U.S. Army Corps of Engineers.

On May 27, 2015. Posted in College of Engineering and Computing, Geological Sciences and Engineering, Geology & Geophysics, Research, Science & Tech