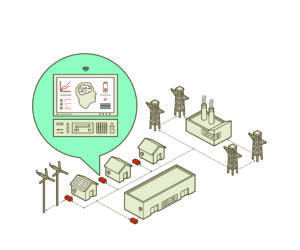 Smart grids like the one depicted here are among the areas addressed by the new Smart Living signature area.

Two new best-in-class or signature areas at Missouri University of Science and Technology were announced Tuesday (May 6) by Missouri S&T Chancellor Cheryl B. Schrader.

The two new signature areas were chosen from nine proposals submitted by Missouri S&T faculty. The proposals and subsequent presentations were screened by a committee of faculty representatives from all academic areas on campus, then selected by Schrader and Provost Warren K. Wray. The proposals were evaluated on how well they connected to long-term critical national issues, research and entrepreneurship potential, and alignment with Missouri S&T’s strategic plan.

“These two new signature areas will help us to further address critical national issues in the areas of defense, space exploration, energy, environmental sustainability, cyber security and transportation, among others,” says Schrader. “These areas represent a bold step toward ensuring the future vitality of this university and will offer research and educational solutions to benefit Missouri, the nation and the world.”

Attaining signature status in these areas means that Missouri S&T will build on each group’s distinctive strengths in teaching and research to make the areas among the nation’s best, Schrader says. To better position S&T to achieve this status, last September Schrader announced new funding from the campus and the University of Missouri System to support the hiring of additional faculty in signature areas, as well as in other areas of strategic importance. In all, S&T plans to add 100 new faculty positions by 2020, an increase of nearly 20 percent.

The Enabling Materials for Extreme Environments signature area builds on Missouri S&T’s strengths in developing materials that can withstand ultra-high temperatures. Led by Drs. Bill Fahrenholtz and Greg Hilmas, both Curators’ Professors in ceramic engineering, this signature area will also involve researchers from chemistry, materials science and engineering, mechanical engineering, nuclear engineering and physics. “We believe we can strengthen our position of leadership in aerospace applications while expanding faculty expertise in this emerging field and making connections through business and entrepreneurship,” Schrader says.

The Smart Living signature area will draw on S&T’s strengths in cyber security, sustainable energy research, big data analytics, architectural design, behavioral and environmental psychology, and transportation and infrastructure to lead research and development efforts toward a more secure and sustainable society. An example of Smart Living in action is Missouri S&T’s Solar Village, where four solar-powered homes rely on a self-sufficient “smart grid” for power. The grid connects all four structures and uses a fuel cell to provide energy to the homes. Sensors and intelligent systems in the homes help to manage the use and flow of energy.

The multidisciplinary Smart Living initiative will be led by Drs. Sanjay Madria and Bruce McMillin, both professors of computer science, and Dr. Glenn Morrison, professor of civil, architectural and environmental engineering. Other faculty from those departments, as well as faculty from business and information technology, chemical and biochemical engineering, electrical and computer engineering, engineering management and systems engineering, mathematics and statistics, mechanical and aerospace engineering, and psychological sciences will contribute to this effort.

“Taken together, our four signature areas address many of the great challenges facing our state and nation,” Schrader says.