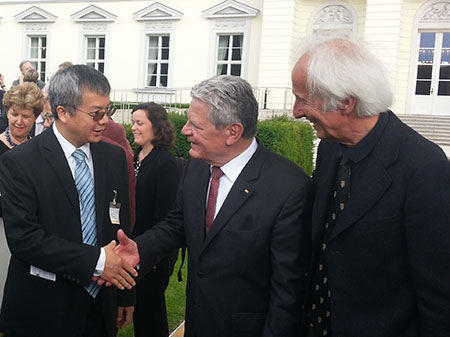 Dr. Chengshan Xiao, left, shakes the hand of German Federal President Joachim Gauck in front of his palace. At right is Helmut Schwarz, president of the Humboldt Foundation. 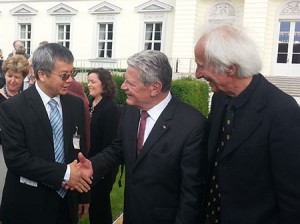 Dr. Chengshan Xiao, left, shakes the hand of German Federal President Joachim Gauck in front of his palace. At right is Helmut Schwarz, president of the Humboldt Foundation.

Dr. Chengshan Xiao, professor of electrical and computer engineering at Missouri University of Science and Technology, has been honored with a Humboldt Research Award from the Alexander von Humboldt Foundation.

The Humboldt Research Award is granted in recognition of the lifetime achievements of a researcher whose fundamental discoveries, new theories, or insights have had a significant impact on their own discipline. The award comes with a monetary fund to allow Xiao to spend six to 12 months collaborating with research experts at the University of Erlangen-Nuremberg in Germany.

Xiao was selected for the award based on his achievements in wireless communications research. His wireless fading channel models have been widely adopted by researchers in academia and engineers in industry. Two of his patented algorithms have been implemented in cellular radio products after successful technical field trials and network integration.

Xiao joined the Missouri S&T faculty in 2007. Since then, he received six research grants totaling more than $2,000,000 from federal funding agencies. He is currently studying secure communications in fading cognitive radio networks with funding from the National Science Foundation.