Thrills and frills for Missouri S&T student with dinosaur find 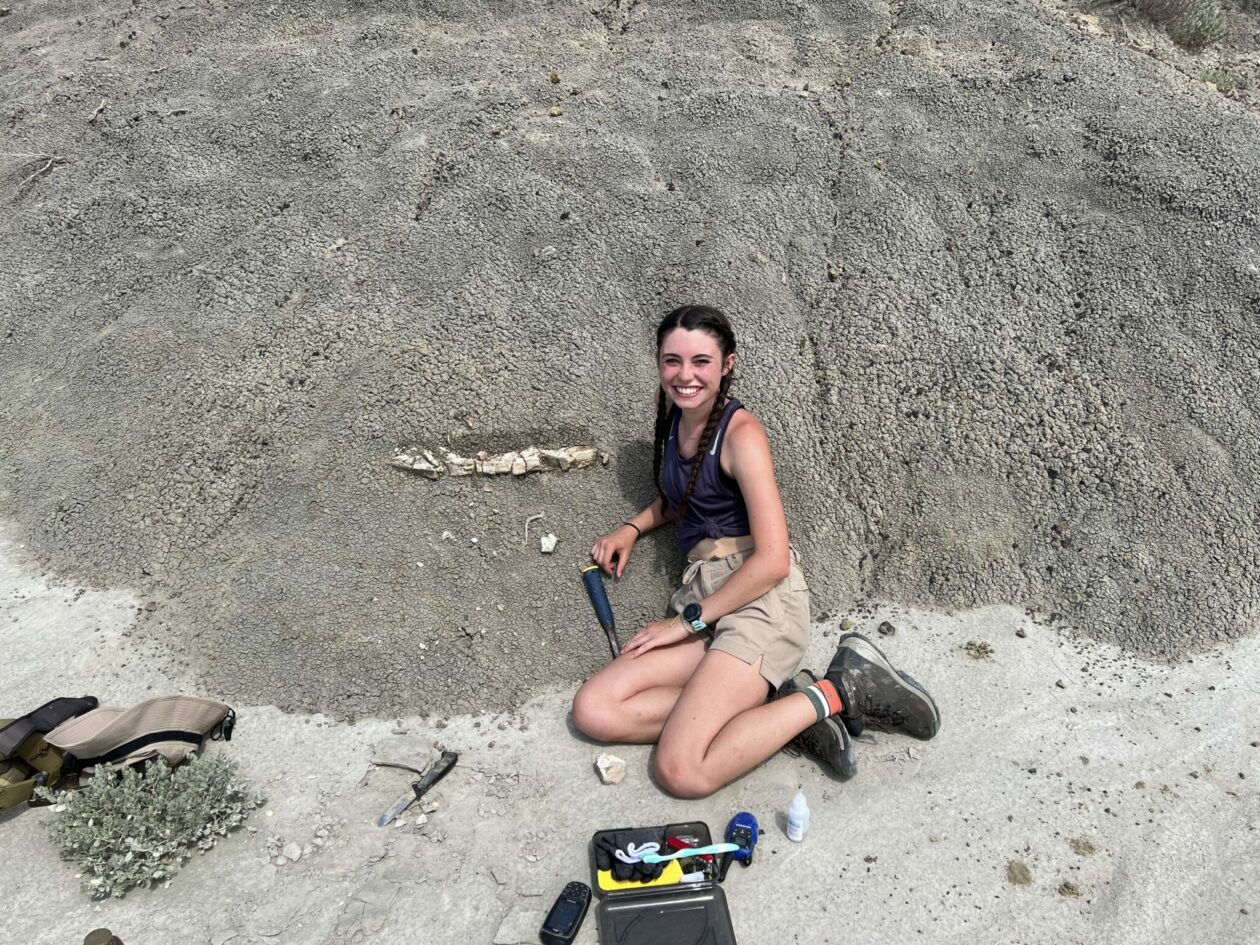 Field school was ending in 20 minutes when Emma Puetz, a junior in geology at Missouri S&T, hiked into the Montana canyons to hunt fossils one last time before heading home to Rolla. She climbed up a steep hill covered with loose gravel in a promising area for fossils. Nothing. Disappointed, Puetz decided to head down the hill by a different path. That’s when she made the discovery of a lifetime. Sticking out of the rocky soil was the edge of a triceratops frill – the bony collar that arched behind the dinosaur’s head.

“I thought at first it was petrified wood,” says Puetz. “It had such well-preserved ornamentation, and it was shiny like petrified wood. So I put a piece of it to my tongue. It stuck.”

Puetz says the pores in fossil bone stick to the tongue. She immediately realized what she had found, started jumping up and down, and radioed Ron Giesler, who runs the field school, a nonprofit entity that promotes lifelong learning in paleontology and archaeology.

Puetz attended the field school partly to get field experience and partly to conduct research with fellow S&T student Audrey Williams, a senior in geology and geophysics. Both are involved in research through S&T’s Opportunities for Undergraduate Research Experiences (OURE) program. Puetz says they were so busy during the school that they had not had much time for fossil hunting. Hence, her last-minute foray into the field.

Puetz says she has been interested in fossils since she was 12 years old. During a family trip to Badlands National Park in South Dakota, she visited a museum and fell in love with all the fossils. She knew then that she wanted to become a paleontologist.

Dr. Francisca Oboh-Ikuenobe, associate dean for academic affairs in Missouri S&T’s College of Engineering and Computing, has known Puetz for several years. As a professor of geology and geophysics, Oboh-Ikuenobe is Puetz’s academic advisor.

“Emma is an excellent student, both academically and as a member of S&T’s cross-country team,” says Oboh-Ikuenobe. “She’s the Ray Morgan Award recipient in the geology and geophysics program. This scholarship is given each year to the top geology junior or senior.”

Puetz is in S&T’s accelerated master’s degree program and eventually wants to earn a Ph.D.

“It’s so nice that S&T has this program,” Puetz says. “If I were to get my bachelor’s degree at S&T and then get a master’s at another university, it would take much longer.”

Puetz plans to travel back to Montana next summer to dig out her discovery. As the finder, she earned naming rights. She named the 66-million-year-old fossil – what else? – Joe Miner, after the university’s mascot.

On September 20, 2022. Posted in College of Engineering and Computing, Geosciences and Geological and Petroleum Engineering, Missouri S&T, Missouri University of Science and Technology, News