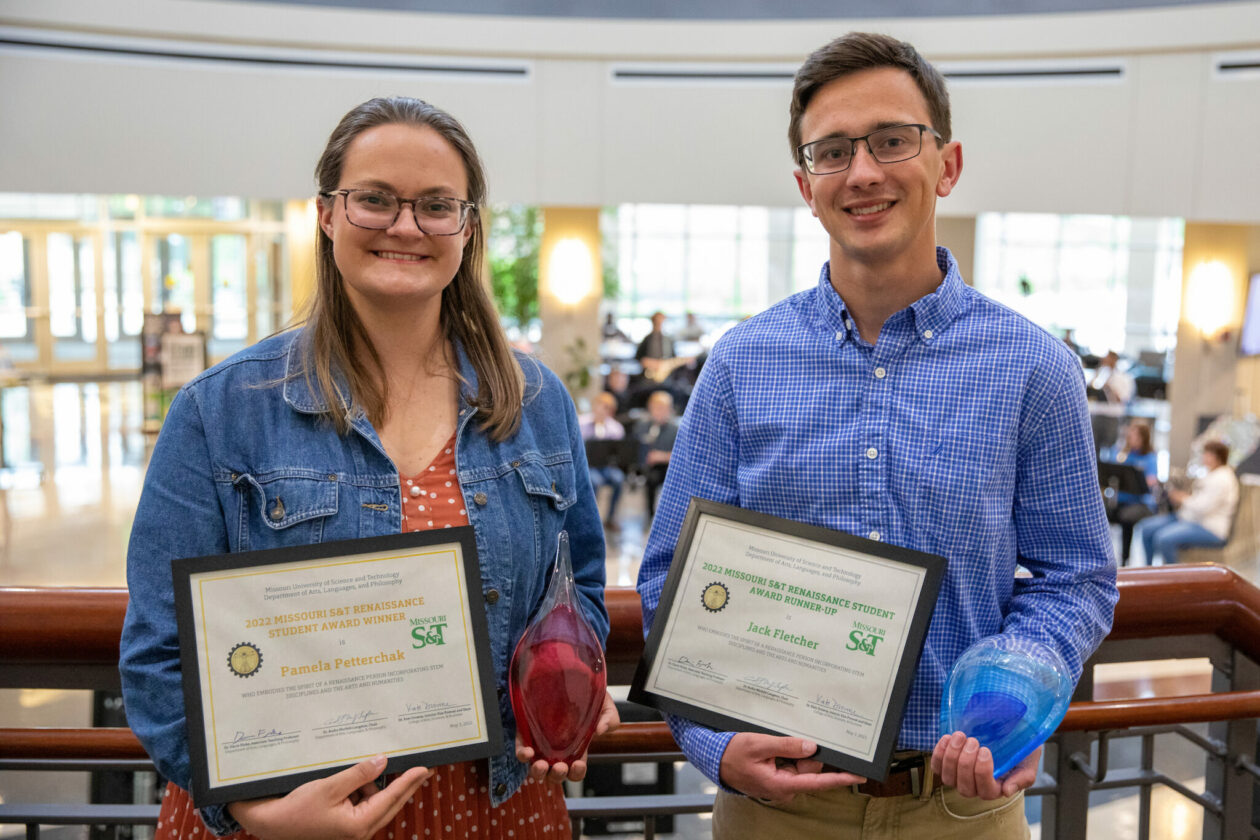 Pamela Petterchak, a senior in computer science and computer engineering from St. Louis, has been named Missouri S&T’s Renaissance Student for 2022. She received the award, which includes a $1,000 prize, on May 3, at a ceremony hosted by the arts, languages and philosophy department.

This award is presented each year to a graduating senior who exhibits the qualities of a “Renaissance” person — someone who excels in multiple intellectual or artistic disciplines. The most famous example is Leonardo Da Vinci, who was a painter, sculptor, musician, mathematician, inventor and writer.

“Pamela is tremendously talented in everything she does,” notes nominator Taylor Gruenloh, assistant teaching professor of theatre at S&T. “She has been a staple in the performing arts in Castleman Hall and has been a tremendous leader in these environments.”

Nominator Dr. A. Ricardo Morales, associate teaching professor of computer science at S&T, praised Pamela for her computer programming skills, her ability to tackle complex problems, and her leadership in the department’s student organizations.

Petterchak is a member of the Missouri S&T marching band, has served as a student ambassador both for the campus and for the computer science department, served as president of the Association for Computing Machinery student chapter, and participates in Newman Center activities on campus.

“I have known Pamela since she came to us as a freshman in the Miner Marching Band,” says nominator Dr. David Samson, assistant professor of music at S&T. “Since then, I have seen her grow not only as a musician, but as a leader and arts advocate. She has performed with many of our ensembles, including the Miner Marching Band, Symphonic Band and Wind Symphony.”

The runner-up Renaissance Student is Jack Fletcher, a senior in nuclear engineering from St. Louis, with minors in mathematics, German and physics. Fletcher plays trombone and tuba in the S&T orchestra and brass choir, plays on the intramural Miner Threat Ultimate Frisbee Team, and is president of the Lutheran Student Fellowship. He will attend MIT in the fall, where he will pursue a Ph.D. in nuclear engineering.

“In the time that I have shared with Jack, he has proven himself as a learner capable of identifying and solving problems related to reactor physics,” says nominator Dr. Syed Alam, assistant professor of nuclear engineering and radiation science at S&T. “He has excellent analytical skills and he grasps eagerly top-down and bottom-up approaches in physics concepts.”

“What makes Jack such a unique soul is his desire not only to better himself, but to better those around him,” states nominator Dr. Kyle Wernke. “I cannot stress enough how impressive this young man is.”

Missouri University of Science and Technology (Missouri S&T) is a STEM-focused research university of over 7,200 students. Part of the four-campus University of Missouri System and located in Rolla, Missouri, Missouri S&T offers 101 degrees in 40 areas of study and is among the nation’s top 10 universities for return on investment, according to Business Insider. S&T also is home to the Kummer Institute, made possible by a $300 million gift from Fred and June Kummer. For more information about Missouri S&T, visit mst.edu.