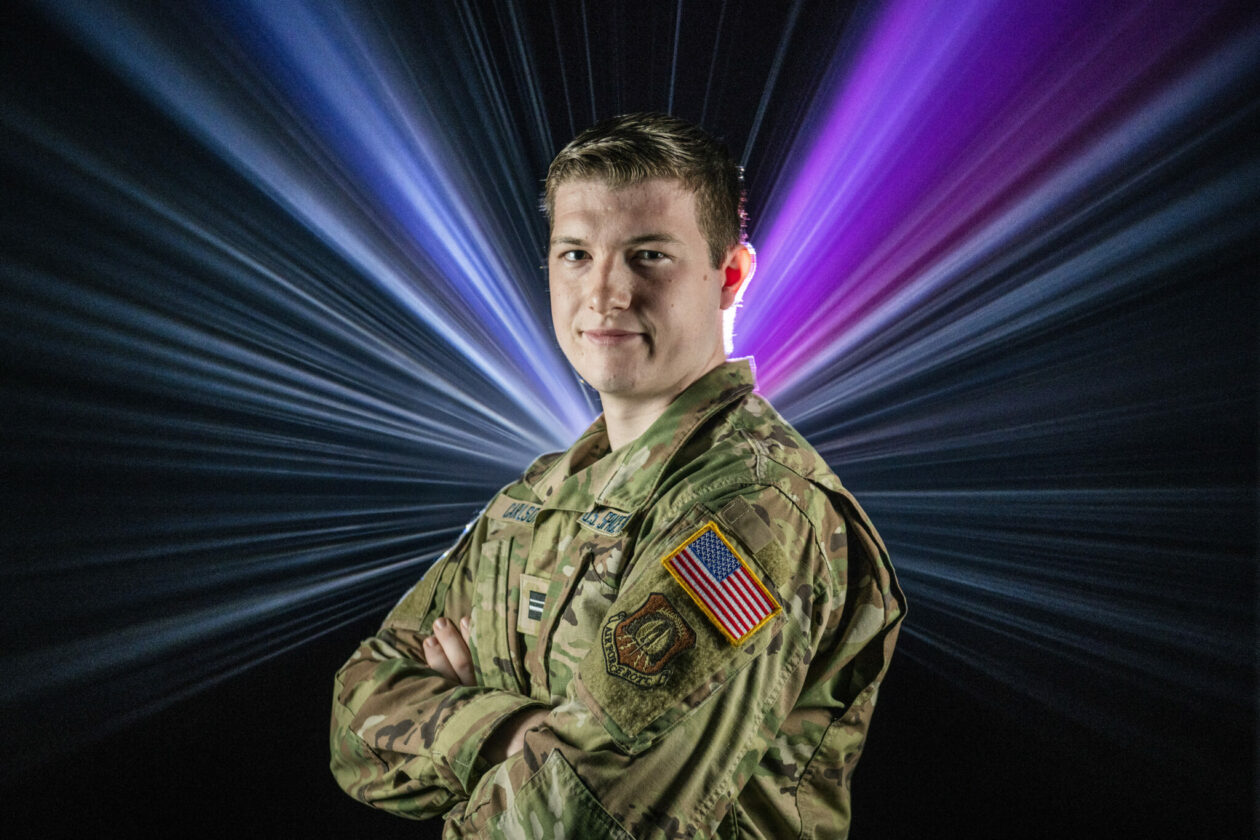 Michael Carlson graduates from Missouri S&T on Saturday with a bachelor’s degree in computer science. He will also be commissioned as a lieutenant in the U.S. Space Force, where he plans to specialize in cybersecurity. Photo by Michael Pierce, Missouri S&T.

The first time he presented his work to a professor, Michael Carlson wasn’t exactly confident. The class was Introduction to Programming, the professor was Clayton Price and Carlson was a first-year student fresh off his family’s cattle farm near the town of Edina, a northeast-Missouri community of around 1,000. He was nervous.

“I hadn’t done a lot of coding, and I wasn’t sure if I could keep up,” he says. Many of the students in his classes were city kids who had gone to bigger schools with bigger budgets; Carlson, who graduated high school in a class of 38 — who knew how to play defense and offense because there simply weren’t enough football players — felt that a lot of them were already ahead.

Price, sensing his student’s uncertainty, pulled up his own farm, which is just outside Rolla, on Google. Then he invited Carlson to do the same, and for a few minutes the two set coding aside and compared acreage.

He considers the lesson he learned during that meeting to be one of the most enduring of the many he’s learned since arriving at S&T. He graduates on Saturday with a bachelor’s degree in computer science. He will also be commissioned as a lieutenant in the U.S. Space Force, where he plans to specialize in cybersecurity.

Carlson cycled through a few dream careers before choosing computer science. At one point he wanted to be a psychologist or a psychiatrist. For a while he thought about becoming an athletic trainer.

“I love sports,” he says. “I also love helping people.”

But ultimately his notions of a sports career yielded to practicality. His father reminded him of the value  of a degree in a field where the demand for skills is greater than the supply of those who are skilled. Computer science met the specifications. He sees his specialization in cybersecurity — which he’s been studying for the past couple of years — as a way of helping society.

“Working in cybersecurity is an important part of protecting our technological infrastructure, our military and the country,” he says.

His goal is to sharpen his skills at detecting problems and deterring them before an adversary attacks.

The road to Rolla

Missouri S&T was the last school Carlson visited his senior year in high school. After a week-long college tour on a charter bus, Carlson talked with a childhood friend who was planning to attend S&T to become a nuclear engineer.

“He said I should check it out, so I came for a visit,” he says. “It checked all the boxes, but what really did it for me was the Air Force ROTC detachment.”

There, he says the colonel who met with him and his mother presented a convincing pitch for S&T.

“And he did not steer me wrong,” says Carlson, who believes he’s grown more in his four years at S&T than in all of the 18 years prior to his arrival. “I’ve had so many opportunities to grow and find out what kind of leader I want to become, and then execute on it.”

The emphasis on mentoring has been an important part of his S&T experience. “There’s a great culture at this school, especially at the ROTC detachment,” he says. “Everyone wants everyone else to be the best version of themselves. As a result of that culture, I’ve been able to watch myself become more compassionate and empathetic.”

Carlson thinks the acceptance of failure is also an important part of the S&T culture.

“As long as you get up and learn from your mistakes and go out and make it better, it’s not viewed as failure,” he says.

In fact, learning from mistakes is one of the topics he wants to address in the book he hopes to write eventually.

“We tend to want to learn from those who won, or got the top job,” he says. “I’d like to know what the person who came in second or third learned from the experience. I think we’re more self-critical when we don’t reach the top of the mountain.”

Carlson is always on the lookout for ways to improve. He believes he inherited his drive from his parents’ strong work ethic. He describes his father as a person who works from “dark to dark”; his mother piled all four Carlson children into the minivan and drove them 25 miles to school, where she teaches.

Herding cattle taught him about developing and then using strategy to manage enormous, seemingly unmanageable animals. And watching movies about superheroes inspired him to start setting short-, medium- and long-range goals toward becoming one.

“I figured out the importance of goal setting at a fairly young age,” he says.

Age is a tricky thing for Carlson: He’s 22, but considers himself much older. “Some people say I dress and act like a dad, and it’s humorous, but I do calculate how I do things,” he says. “I don’t want to rob myself of the good moments, of course, but I’m always debriefing myself, spending a lot of time in introspection.”

Carlson’s interest in cybersecurity was what put Space Force on his radar initially. Intrigued, he sought out people familiar with the new military branch — it was founded in 2019 — and read everything he could get his hands on. He considers himself an old soul but found himself attracted to the organization’s relative newness.

“Space Force is still coming out with their own doctrine rather than evolving as just a branch of the Air Force,” he says. “And I’m a person who wants to improve myself while also helping make a positive impact on the world. I want to put all that together and help Space Force become the best version of itself.”

“Getting more involved in satellites will take computer science into a whole new spectrum,” he says. “I’m excited about working with really cool technology and great people. I think it’s going to be a great journey.”

On May 11, 2022. Posted in Air Force ROTC, College of Engineering and Computing, Computer Science, News, People