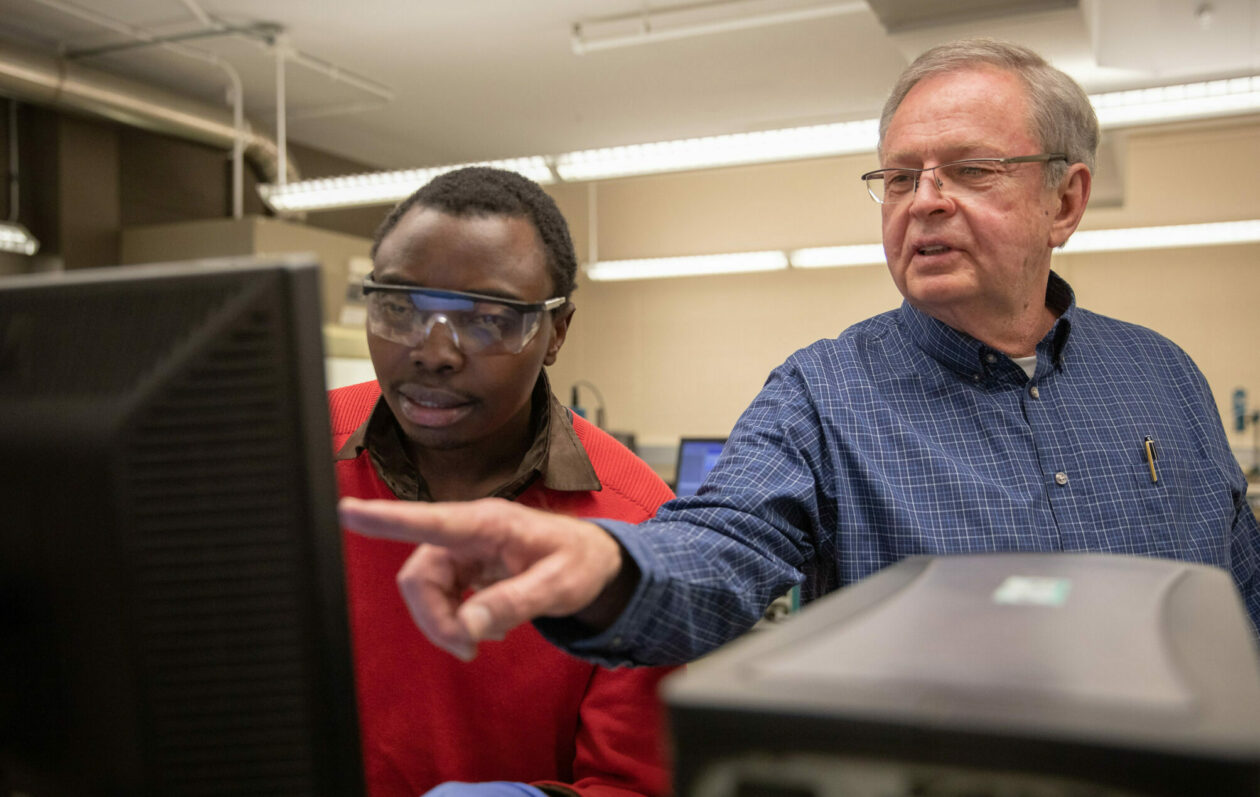 Dr. Jay A. Switzer (right), Chancellor’s Professor and Curators’ Distinguished Professor emeritus of chemistry at Missouri S&T, works with a graduate student in a lab in 2019. Photo by Andrew Layton, Missouri S&T.

A Missouri S&T chemistry researcher has patented a new method of creating metal foils with ordered crystal structure. Using silicon as a template to shape and form thin, high-performance metal films allows them to remain flexible and maintain the order of the silicon substrate.

The metal-based foils made of gold, silver or copper are used in the making of electronics, especially flexible electronics used in wearable technology.

“With this new method, we are able to produce gold foils by epitaxial lift-off from silicon single crystals,” says Dr. Jay Switzer, Chancellor’s Professor and Curators’ Distinguished Professor emeritus of chemistry at Missouri S&T. “We use gold, which in bulk is quite expensive, but we work with gold that is only nanometers thick, so the cost is pennies instead of thousands of dollars. The gold is thin enough to be quite transparent.”

Switzer’s research combines chemistry with materials science to create high-performance inorganic thin films, or “epitaxial” films. Epitaxy is the growth of crystals, or thin films, whose orientation is determined by the crystalline substrate they are layered on. When the atomic structure of these crystals perfectly aligns with their substrate, the end result is a film with superior electronic and optical properties, rivaling the attributes of more expensive single crystals.

“Electronic devices are usually based on highly ordered single crystals such as single-crystal silicon, but flexible electronics are often based on polycrystalline or amorphous materials that have less ideal electronic properties due to the lower crystalline perfection,” says Switzer. “This patent explains how to produce highly ordered gold foils that can serve as the substrate for depositing highly ordered and flexible semiconductors.”

By forming the metal foils on silicon surfaces using this new method, the final is single-crystal-like, unlike current models that are grown by vacuum evaporation. Switzer’s method could reduce costs of the materials that the foils can be grown on.

“We are using a similar method to produce free-standing flexible foils of transparent wide bandgap semiconductors,” says Switzer. “These could be ideal for applications such as flexible displays, transparent electronics and wearable solar cells.”

Switzer holds 14 U.S. patents, primarily focused on the electrodeposition of functional materials. He is a fellow of the Electrochemical Society, the American Association for the Advancement of Science, the Materials Research Society, and the Japan Society for the Promotion of Science.

The full research can be found under U.S. Patent Number 10,980,130 titled “Metal Foils with Ordered Crystal Structure and Method for Producing Metal Foils.”

On August 10, 2021. Posted in College of Arts, Sciences, and Business, Department of Chemistry, Research, Science & Tech