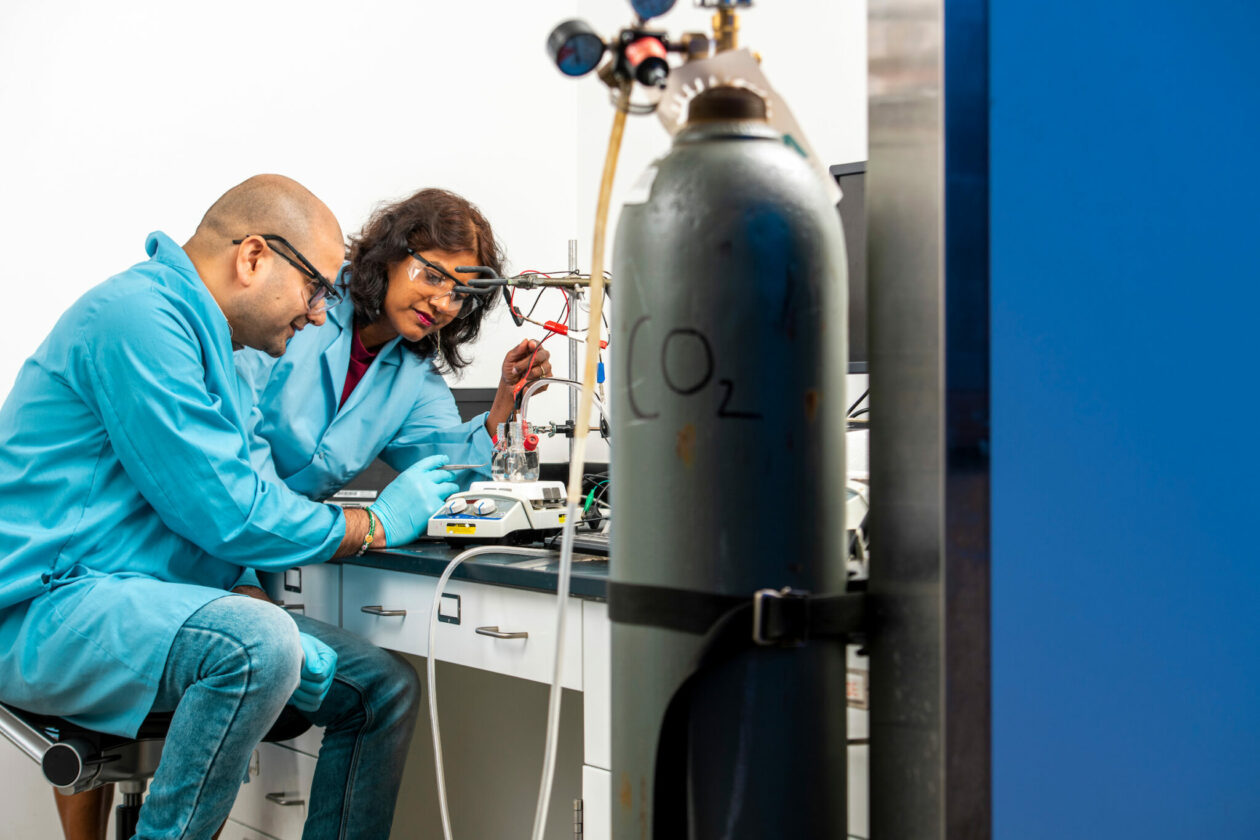 A researcher at Missouri S&T is working to reduce greenhouse gases by designing a catalyst to convert the environmental pollutant carbon dioxide into new fuels and chemicals while using as few new resources as possible.

Dr. Manashi Nath, an associate professor of chemistry at Missouri S&T, is finding promising materials that speed up electrochemical reactions that occur when reducing or reusing carbon dioxide while producing carbon-rich products in the process. Nath’s research is supported by a grant for over $500,000 from the National Science Foundation.

Nath says that a solution is urgently needed to convert this atmospheric carbon dioxide back into chemical products, “close the loop” of incidental greenhouse gas production and reduce the amount of carbon dioxide already built up in the atmosphere. She is currently partnering with Dr. Julia Medvedeva, professor of physics at S&T, and Dr. Shubhender Kapila, professor emeritus of chemistry at S&T, to design economically feasible catalysts from non-precious elements that can recycle the gas using lower voltages, pressures and temperatures than traditional methods.

“Fossil fuels continue to supply the majority of global energy needs, and a large downside of the production process is the creation of huge quantities of carbon dioxide as byproduct,” says Nath. “Carbon dioxide concentration is at an all-time high and is projected to continue to rise over the next several years.”

Current carbon dioxide reduction processes are slow and energy intensive, so a catalyst is needed to lower the activation barrier around the gas and “draw it out of the well.” Electrocatalysts are currently used to help process and capture carbon dioxide, but despite the amount of previous research on the topic, lowering the constraints of operating conditions still evades researchers and the energy industry.

“Our innovation lies in designing these electrocatalysts based on understanding how the gas reacts on the catalyst surface and trying to optimize that interaction towards valuable products such as ethanol, methanol and acetic acid,” says Nath. “If we can do this efficiently, turning the gas from an atmospheric contaminant to fuels, we can not only take a huge step towards environmental remediation, but we can also close the gap in the carbon cycle in a cost-effective manner.”

Nath and her research team hope to show that their proposed catalysts, copper-based chalcogenides like copper selenide, will show better activation for the gas’s reduction reaction. By working with the gas at room temperature, the team says the research could be applied at the gas’s main generation points such as coal- or gas-power plants.