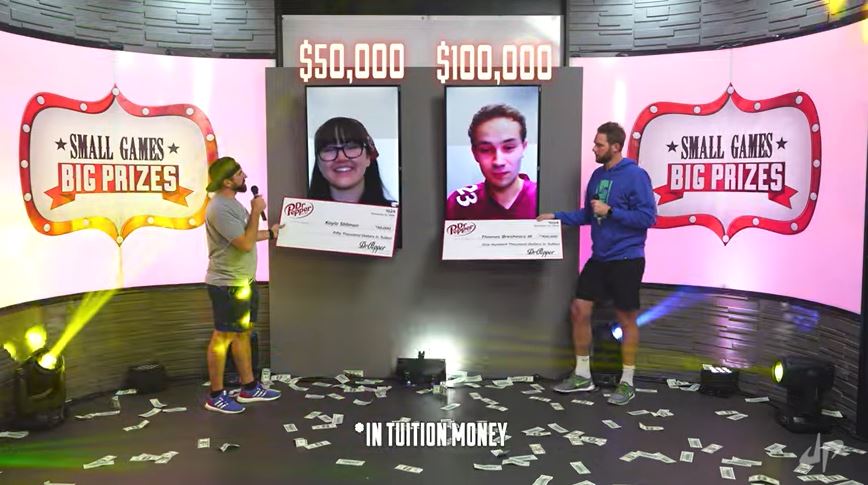 A screen capture of Trey’s event on YouTube. Image submitted by Coyne PR.

Thomas “Trey” Breshears III, a sophomore in electrical and computer engineering at Missouri S&T, recently won a $100,000 scholarship while appearing on the YouTube channel “Dude Perfect.”

Breshears, from Kansas City, Missouri, was featured in the Dude Perfect video published on Dec. 14 titled “Pocket Flame Thrower – OT 21.” In the video, Breshears participated in a trivia contest called “Small Games Big Prizes” with one other college student. The winner earned a $100,000 scholarship through the Dr Pepper 2020 Tuition Giveaway.

“I’ve been a Dude Perfect fan since middle school and getting to finally meet those guys was awesome,” says Breshears. “Two days before the competition, Dr Pepper provided us with a whiteboard and some cool merch for our on-camera appearance, as well as filled us in us that we would be participating in an “easy” trivia competition so we would have a little bit of time to prepare.”

During the competition, Breshears had to answer questions such as “what is the largest lake in the United States” and “name a mammal that cannot jump.” He won the competition when he was able to answer the question “what is the strongest bone in the human body?” His answer of femur earned him the top prize, with the student finishing second place winning $50,000.

“The other contestant, Kayla, was an excellent competitor and the final video only showed five of the roughly 12 questions that we answered, so there was a lot more to the challenge than was shown on screen,” says Breshears. “I was absolutely ecstatic when I won – it was a day that I will never forget. That amount of money has changed my life by allowing me to continue to pursue my dreams without worrying about student debt.”

The video can be viewed at youtube.com/watch?v=9X_nbT89X-c, with Breshears first appearing at the 10 minute, 22 second mark.

On December 15, 2020. Posted in Electrical and Computer Engineering, People