Posted by Delia Croessmann
On September 29, 2020 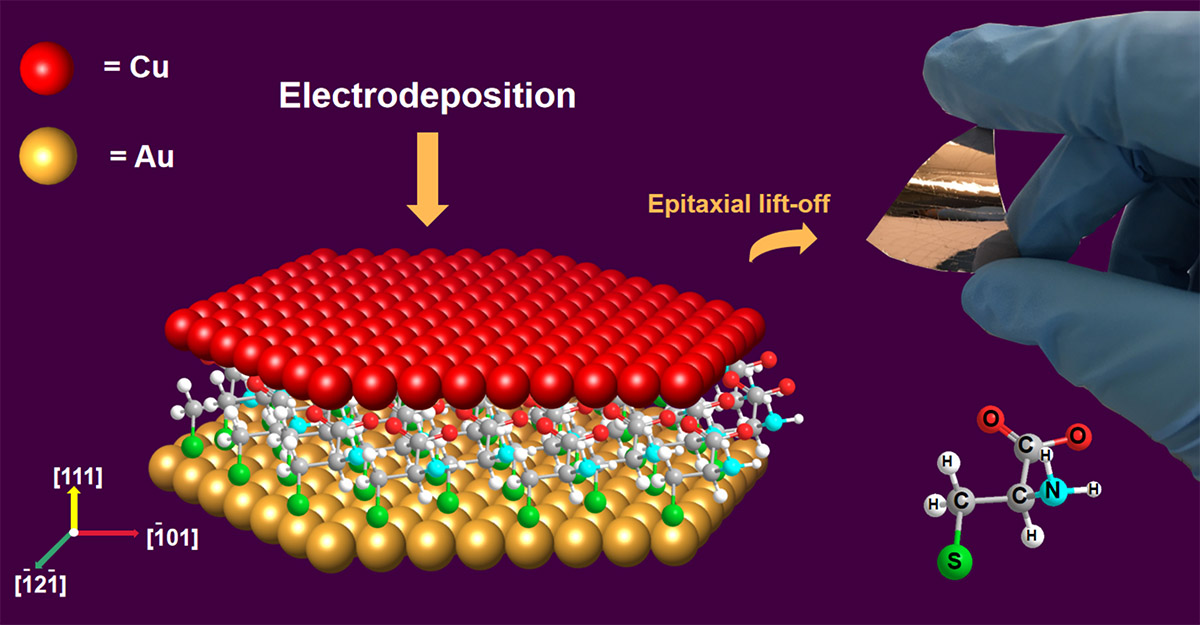 For the first time, researchers from Missouri S&T have shown that highly ordered copper thin films can be crystallized directly on a one-molecule-thick layer of organic material rather than on the inorganic substrates that have been used for years.

The copper thin films they’ve produced are excellent candidates for use as underlying substances for solar cells, LEDs, and high-temperature superconductors, says Dr. Jay Switzer, Chancellor’s Professor and Curators’ Distinguished Professor emeritus of chemistry, who is principal investigator of the project. Switzer says that other researchers have previously electroplated thin films onto self-assembled monolayers (SAMs) of organic molecules, but those films lacked the in-plane and out-of-plane order required for electronic applications.

“Like the way seashells, bones or teeth are formed, we’ve found a way to give the copper films the right level of crystalline order and durability for their applications,” says Switzer. “With our process, which mimics biomineralization, we’re creating inorganic thin films with superior qualities of single-crystal-like order, high conductivity and flexibility.”

In their experiments, the researchers electrodeposited copper on a single layer of L-cysteine, a protein- building amino acid that was placed on ordered layers of gold on silicon. After the copper crystallized into an ordered film, they were able to lift off a single, crystal-like foil simply using adhesive tape. Their process provides an inexpensive route to free-standing metal foils with properties that mimic those of expensive single crystals, the researchers note.

Switzer says their method shows the importance of the cysteine molecule in directing the growth of ordered crystalline structures. As a contribution to science, he notes the method will enable future work on the deposition of ordered films of other important materials such as semiconductors and catalysts onto organic self-assembled monolayers. The method may also prove to minimize the effects of lattice mismatch that sometimes limit epitaxial, or crystalline, growth.

Other Missouri S&T scientists on the team include Dr. Avishek Banik, a post-doctoral researcher in chemistry; Dr. Eric Bohannan, a senior research specialist in S&T’s Materials Research Center; and Bin Luo, a doctoral student in chemistry.

The team’s findings will be published in the upcoming issue of the American Chemical Society’s Journal of Physical Chemistry C and are available now online in the study, “Epitaxial Electrodeposition of Cu(111) onto an L-cysteine Self- assembled Monolayer on Au(111) and Epitaxial Lift-off of Single-crystal-like CuFoils for Flexible Electronics.”

Founded in 1870 as the University of Missouri School of Mines and Metallurgy, Missouri University of Science and Technology (Missouri S&T) is a STEM-focused research university of more than 8,000 students and part of the four-campus University of Missouri System. Located in Rolla, Missouri S&T offers 99 different degree programs in 40 areas of study, including engineering, the sciences, education, business and information technology, the humanities, and the liberal arts. Missouri S&T is known globally and is highly ranked for providing a high return on tuition investment, exceptional career opportunities for graduates, and an emphasis on applied, hands-on learning through student design teams and cooperative education and internship opportunities. For more information about Missouri S&T, visit mst.edu.