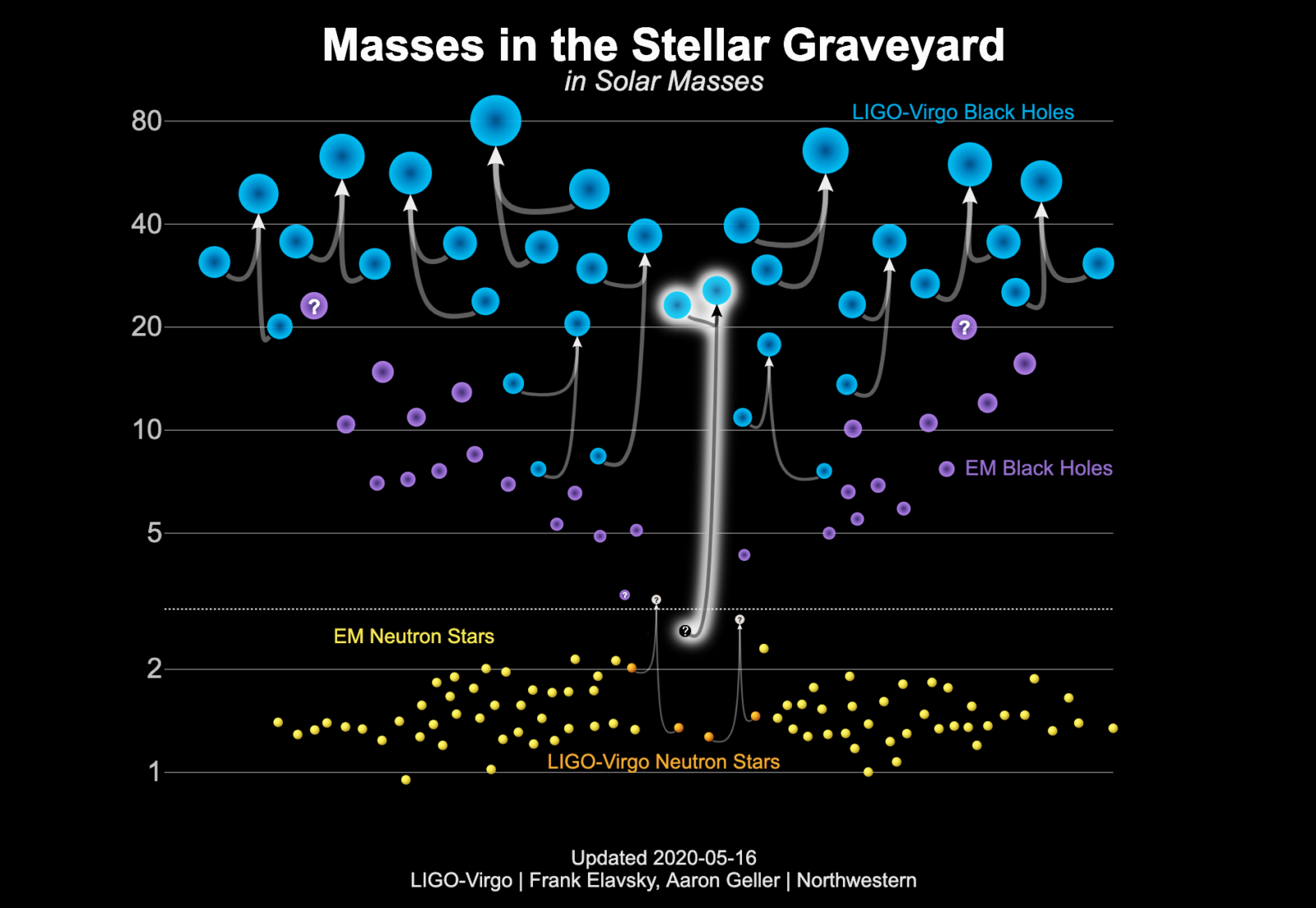 Gravitational wave scientists have observed what may be an entirely new population of astronomical objects, and researchers from Missouri S&T played a part in the discovery.

Dr. Marco Cavaglia, professor of physics and director of Missouri S&T’s Institute for Multi-Messenger Astrophysics and Cosmology; Dr. Sudarshan Karki, a post-doctoral researcher in physics; and Kentaro Mogushi, a Ph.D. student in physics, all from Missouri S&T, along with Dr. Evan Goetz, a previous S&T post-doctoral researcher in physics, are among the collaborators in a study published June 23, 2020, announcing the discovery of an object of 2.6 times the mass of our sun as it merged with a black hole the size of 23 solar masses.

The cosmic merger, lying about 800 million light-years away from earth, generated a splash of gravitational waves and a new black hole that were detected in August 2019 with the National Science Foundation’s Laser Interferometer Gravitational-wave Observatory (LIGO) and the Virgo detector in Europe. The study of this event, dubbed GW190814, is published in The Astrophysical Journal Letters.

Missouri S&T participated in the study as the state’s only institutional member of the LIGO Scientific Collaboration (LSC). With National Science Foundation (NSF) funding, faculty and student researchers in Missouri S&T’s Institute for Multi-Messenger Astrophysics and Cosmology contributed to the GW190814 discovery through their on-site involvement with the calibration of LIGO’s two-mile-long laser gravitational wave detector located in Hanford, Washington. Calibration of the detectors is crucial to correctly measure the masses and other physical properties of the colliding objects, such as their spins and distance, and thus enable astrophysical investigations, Cavaglia says. The researchers also continually contribute to LIGO’s endeavors in the areas of data analysis, detection and astrophysical interpretation of unmodeled gravitational-wave signals.

“For decades, astronomers have been perplexed by a gap in mass that lies between the heaviest neutron stars and the lightest black holes,” says Cavaglia, who co-chairs the LSC’s Burst Sources Working Group. “The heaviest known neutron star is no more than 2.5 solar masses, and the lightest known black hole is about five solar masses, which left us to wonder if anything existed in this mass gap.”

According to the LSC, before the two objects observed in GW190814 merged, their masses differed by a factor of nine, making this the most extreme mass ratio known for a gravitational-wave event.

“The mystery object may be a neutron star merging with a black hole, an exciting possibility expected theoretically but not yet confirmed observationally,” says Dr. Vicky Kalogera, the Daniel L. Linzer Distinguished University Professor in physics and astronomy at Northwestern University, and principal investigator of the university’s LSC group. “However, at 2.6 times the mass of our sun, it exceeds modern predictions for the maximum mass of neutron stars, and may instead be the lightest black hole ever detected.”

Cavaglia says this cosmic merger will change how scientists talk about neutron stars and black holes. “This observation is yet another example of the exciting discoveries that gravitational-wave astrophysics has brought us, starting with the first detection of a black hole merger in 2015,” says Cavaglia.

Additional information about the gravitational-wave observatories:

The Laser Interferometer Gravitational-Wave Observatory (LIGO) is funded by the NSF and operated by Caltech and MIT, which conceived of LIGO and lead the project. Financial support for the Advanced LIGO project was led by the NSF with Germany (Max Planck Society), the U.K. (Science and Technology Facilities Council) and Australia (Australian Research Council-OzGrav) making significant commitments and contributions to the project. Approximately 1,300 scientists from around the world participate in the effort through the LIGO Scientific Collaboration, which includes the GEO Collaboration. A list of additional partners is available at https://my.ligo.org/census.php.

The Virgo Collaboration is currently composed of approximately 550 members from 106 institutes in 12 different countries including Belgium, France, Germany, Hungary, Italy, the Netherlands, Poland, and Spain. The European Gravitational Observatory (EGO) hosts the Virgo detector near Pisa in Italy, and is funded by Centre National de la Recherche Scientifique (CNRS) in France, the Istituto Nazionale di Fisica Nucleare (INFN) in Italy, and Nikhef in the Netherlands. A list of the Virgo Collaboration groups can be found at https://apps.virgo-gw.eu/vmd/public/institutions.