A summer at Stingray Bay, and beyond 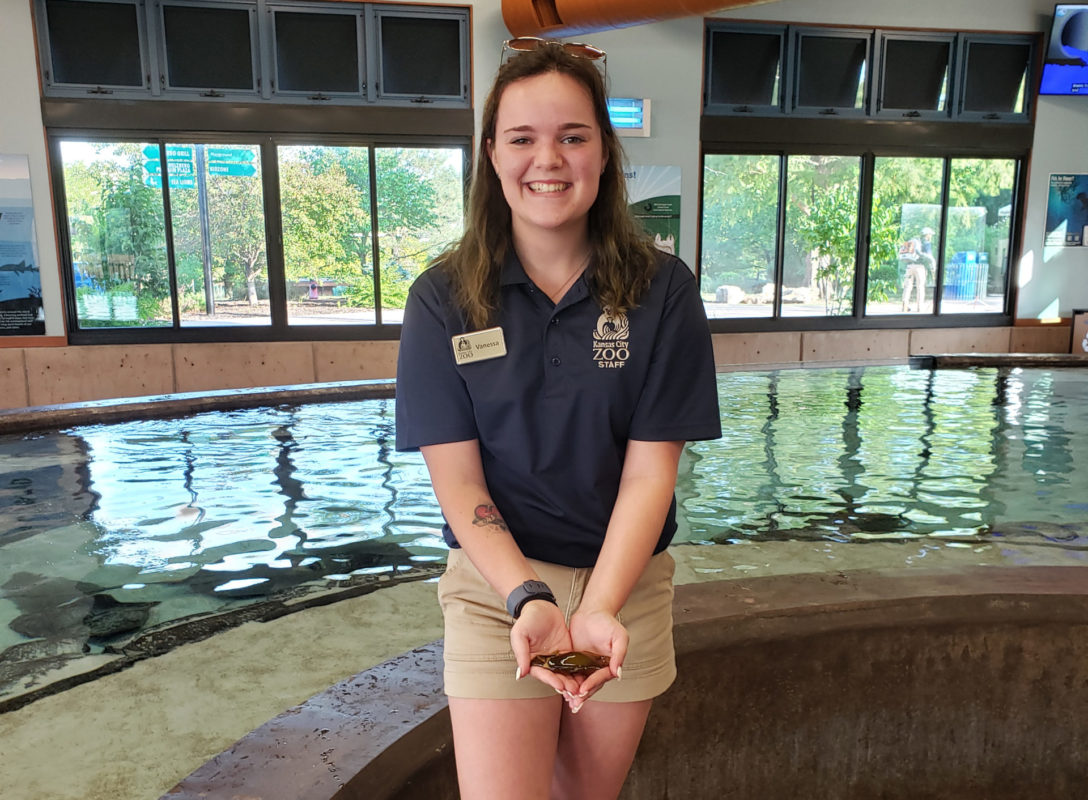 Vanessa Mahan displays a baby stingray from the touch tank at the Kansas City Zoo.

When she first entered college, Missouri S&T senior Vanessa Mahan, a biological sciences major, thought she wanted to be a physician.

But a semester’s coursework in cell biology led Mahan to learn the profession was not for her. After further exploring her interests through a biodiversity course, Mahan found her passion — merging medicine with her love of animals.

And not just any animals. Mahan focuses on endangered species such as whales, sharks, seals and turtles. Her summer internship as an education instructor at Stingray Bay, a 20,000-gallon touch tank at the Kansas City Zoo, gave her the marine mammal conservation experience she was looking for.

“I learned that sharks have iodine and iron deficiencies, and they can’t eat unless you give them vitamins,” says Mahan. “With 5,000 people a day coming through the exhibit, we saw that the stingrays and sharks were well taken care of.”

The internship at Stingray Bay was one of four summer job offers Mahan received.

Mahan’s scientific job qualifications were fortified by the award-winning “Bionic Bowel” innovation project she and her research partner, Catherine Pollman, a 2019 biological sciences graduate, created in S&T’s BioDesign and Innovation course taught by Julie Semon, assistant professor of biological sciences. Their invention uses bioactive glass as a way to potentially change the pH level in the body of a Crohn’s disease sufferer. By including the biomaterial in an oral medicine that dissolves and prevents scar tissue, the two realized that they could implant the glass in the human body via a pill to repair the damaged area.

In April, they pitched their project in the UM System’s Entrepreneur Quest Student Accelerator competition and won $5,000. In May, they went the next step by winning a $10,000 Blue Cross Blue Shield Healthcare Innovation Prize at UMKC. They’ve used their winnings to start animal trials for their proof of concept, to be followed by a patent application.

“We wouldn’t have been able to do what we’ve done without being at S&T,” says Mahan. “There’s nothing like it anywhere else. We definitely get a lot of practical training that other schools don’t offer.”

Mahan has her eye on Alaskan marine mammal graduate programs where she could work with endangered species of whales and seals not in captivity. She wants her research to be published in scientific journals.

And the Bionic Bowel invention?

Mahan sees a use for it in veterinary care. “No one has been able to re-grow turtle shells,” she says.

“Turtles of any size can die from cracks in their shells — our product could re-grow them quicker.”

One thought on “A summer at Stingray Bay, and beyond”