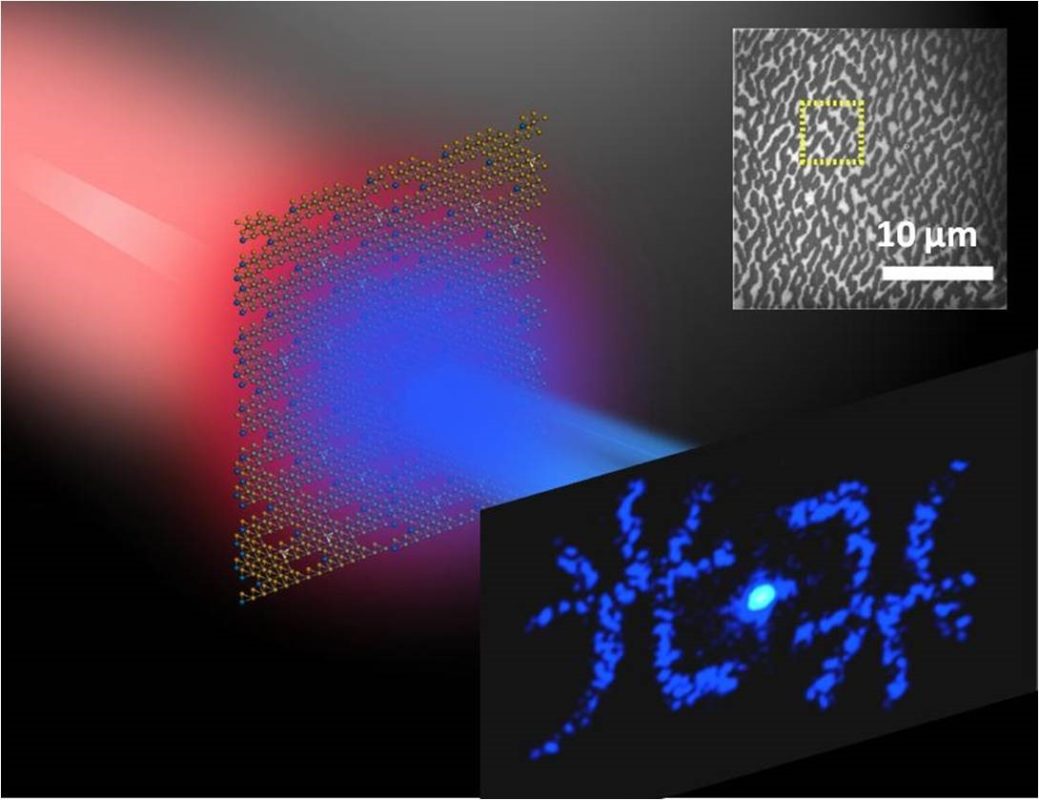 Stimulated by an ultrafast laser beam, the nanopatterned tungsten disulfide hologram generates the reconstructed image of the Chinese character for the word “light” with blue color. The inset shows the scanning electron microscope image of the fabricated hologram.

Missouri S&T researchers are demonstrating a new concept to reconstruct holographic images by using a single two-dimensional material monolayer with the thickness of less than one nanometer. Their work could lead to the creation of smart watches with holographic displays, printed security cryptograms on bank notes and credit cards, and new possibilities for data storage.

The researchers describe their atomically thin nonlinear optical holograms in Nano Letters, one of the top journals in nanotechnology research, and prototype their device by reconstructing several kinds of holographic images with tungsten disulfide monolayers of the thickness of around 0.7 nanometer. A nanometer is one billionth of a meter, and a tungsten disulfide monolayer only contains one layer of tungsten atoms sandwiched between two layers of sulfur atoms.

The approach is described in the Nano Letters paper “Atomically thin nonlinear transition metal dichalcogenide holograms,” which was published online Friday, Aug. 16. It involves the use of only a single nanopatterned tungsten disulfide monolayer that is able to control the wavefront of light, where the designed hologram patterns are punctured by a nanofabrication process known as focused ion beam milling.

Experimenting with the ultrafast laser excitation on the nanopatterned tungsten disulfide monolayer, the researchers demonstrated a nonlinear optical hologram with high conversion efficiency and atomic thickness, for producing optical vortex beams and Airy beams as well as reconstructing complex holographic images at the second harmonic frequency. An Airy beam is a waveform that appears to curve as it moves.

In their paper, the Missouri S&T researchers published reconstructed holographic images of the Chinese character for the word “light” with blue and green colors. They believe this new type of optical hologram holds promise for future applications, such as security markings on banknotes and credit cards, optical communications, smart watch displays, and data storage.

“We are able to control the binary amplitude modulation of zero and one by simply etching out or keeping the tungsten disulfide monolayer area,” says Dr. Xiaodong Yang, an associate professor in mechanical and aerospace engineering at Missouri S&T. “Our holograms possess significantly higher nonlinear conversion efficiency than the currently existing plasmonic metasurface holograms made of metallic nanostructures.”