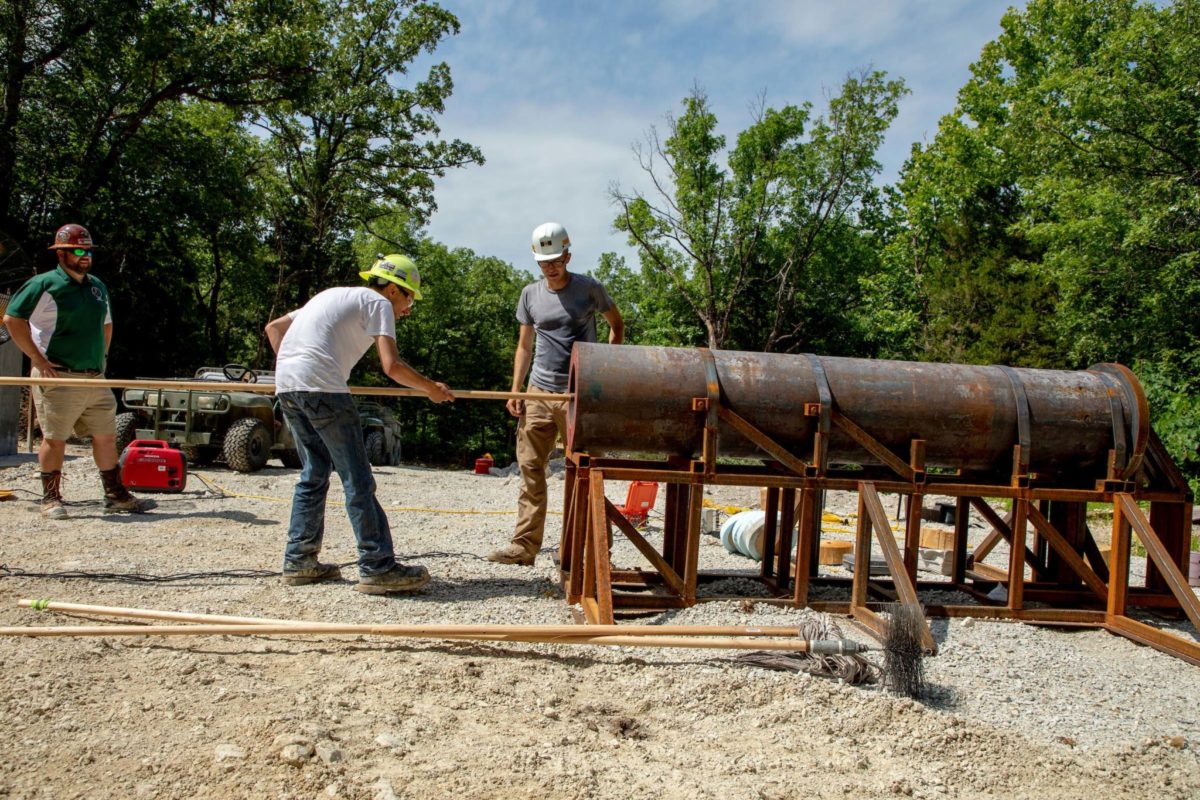 Mining and explosives engineering researchers at Missouri S&T began testing concrete seals used to close coal mine tunnels this month by loading a cannon with projectiles, shooting them at the seals and testing their impact. The research could help to improve the design of seals and keep miners safe.

Dr. Kyle Perry, Missouri S&T associate professor of mining and nuclear engineering, is the lead researcher on the project. Working with him is Ethan Steward, a master’s student in explosives engineering from Chelsea, South Dakota. Steward and Perry spent about five months building the 8-foot cannon they’re using in the study.

“We started loading the cannon with light things that a miner might leave behind such as a hard hat, water jug and hand tools,” says Perry. “The hard hat and jug didn’t do anything to the seals, but the hand tools took a good chunk out of the concrete, and the roof plates put pretty good gouges into the seal.”

The researchers use three different cameras to document what happens as the cannon fires the projectiles at the seals. They then slow down the videos to study them. They have a regular camcorder and two Go-Pros that can get closer to the blast because of their small size. Strain gauges on the seals also tell them what the seal experiences during each blast.

“The videos help us tell what objects are impacting first,” says Perry. “We can start relating the projectile to the strain the seal is experiencing. There’s a lot going on and there’s smoke, which makes it hard to see sometimes.”

Steward says the seals are rated to withstand certain pressure levels, and designers know what pressure they can handle underground. But he says the seals have never been tested before for projectile impact. They hope to learn how the concrete seals withstand blasts from objects left behind in tunnels such as equipment, hard hats, chunks of steel and tools.

“What we don’t know for sure is if these projectiles can damage the seals enough to make them fail for the pressure they are rated for,” says Steward. The research should tell seal designers if they need to adjust their designs to strengthen seals to withstand impacts.

Strata Worldwide, a mining safety services provider based in Atlanta, built two concrete seals for project testing – one a 120-psi (pounds per square inch) design and one a 50-psi design.

Perry says if an explosion happens in a sealed off area of a mine, the seals need to withstand the pressure and any projectiles that hit it without serious damage because there’s a chance of a second explosion.

“If another explosion makes the seal fail, that could put the miners in jeopardy,” says Perry. “I’m more worried about hitting the seal so hard that it fractures and cracks.”

Perry says a fractured seal could leak methane from the sealed areas and create a potentially explosive environment for miners in active mining zones. The researchers hope to determine the size and speed a projectile would need to travel to damage the seal.

S&T received a $249,000 grant from the Alpha Foundation for the Improvement of Mine Safety and Health, an organization formed as a result of one of the worst mining disasters in U.S. history – the one that killed 29 miners at the West Virginia Upper Big Branch Mine in 2010. The S&T Experimental Mine was chosen because of its large-scale testing facilities and expertise.

The testing should be complete by the end of the year, and the research will conclude by April of 2020.