Analyzing past earthquakes may be key to predicting future activity 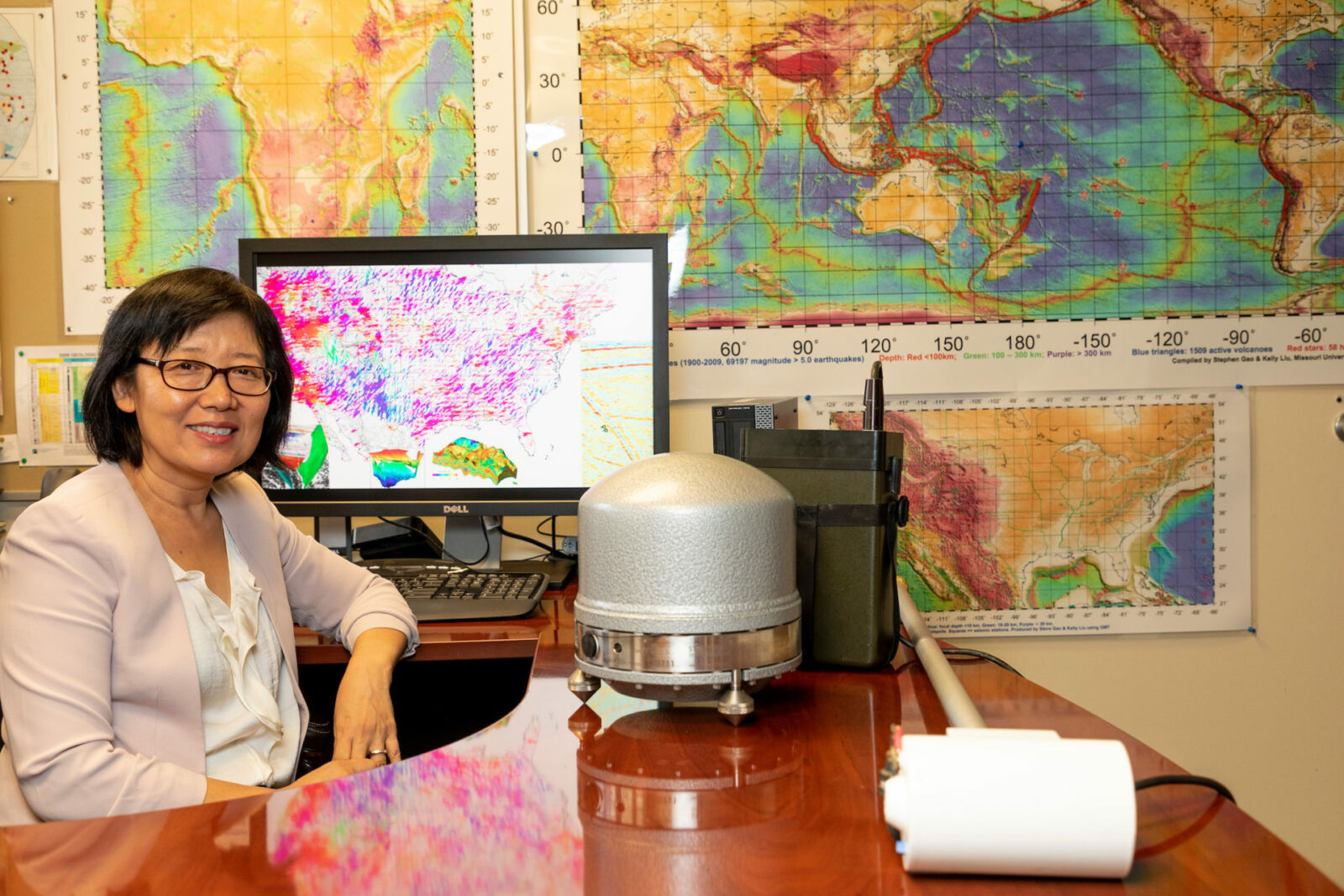 Dr Kelly Liu, professor geosciences and geological and petroleum engineering, photographed in her office. On her desk next to her is a sensor uni used in her research, a sensor device that her teams bury in the ground for as long as a year to collect seismic data. Photo by Tom Wagner, Missouri S&T.

With the recent earthquakes in early July in southern California, one being a 6.4 magnitude and another a 7.1 magnitude, it is more important than ever to be able to accurately predict when and where the next one will occur. A researcher at Missouri S&T is working to do just that by studying past seismic waves produced by earthquakes.

Dr. Kelly Liu, a professor of geosciences and geological and petroleum engineering at Missouri S&T, is digging deeper into the earth’s past data by analyzing shear wave splitting – which is based on the observation that when a wave originated from an earthquake travels through a directionally dependent area formed by plate motion, it will split into two waves.

“The relative movement of the tectonic plates against each other produces majestic mountains and deep ocean basins, but also causes earthquakes and volcanic eruptions,” says Liu. “Improving our understanding of such processes is essential not only for understanding how the earth works, but also for achieving the ultimate goal of reliably predicting and mitigating natural hazards.”

Liu studies the energy waves caused by the sudden breaking of rock within the earth’s crust and mantle, which are recorded on seismographs. Shear wave splitting occurs when a polarized shear wave enters an anisotropic medium. Shear wave splitting is used to test the anisotropy of an area and can lead to a better understanding of the area’s deformation history and the orientation of flow in the earth’s mantle.

“Shear wave splitting analysis is one of the most effective tools to investigate plate motion,” says Liu. “But in spite of years-worth of studies, some fundamental issues related to how natural hazards such as earthquakes can occur on the earth are still poorly understood. The identification of multiple layers of seismic anisotropy can significantly improve our understanding of the “engine” of the deformation that is directly related to the occurrence of natural hazards.”

Liu’s research focuses on analyzing wave data from 1980 to present. She says that previous shear wave splitting studies were mostly conducted under the assumption that there is only one layer of anisotropy.

“The recent dramatic increase in the number of seismic stations and recorded earthquakes suggests that the actual situation is more complicated than this single-layer assumption,” says Liu. “This project will develop and test a set of sophisticated tools to systematically investigate complex anisotropy on a global scale, for the purpose of providing constraints on a number of hypotheses related to plate dynamics and plate motion.”

The research project aims to increase both safety and preparedness for these natural disasters.

“Obviously, the processes leading to tsunamis, earthquakes and volcanic activity happen deep in the earth’s interior and cannot be directly observed,” says Liu. “Indirect tools, such as relying on computer analyses of a large amount of geophysical data collected at the earth’s surface, are essential for accurate and useful predictions.”

Liu is collaborating with Dr. Stephen Gao, Curators’ Distinguished Teaching Professor of geology and geophysics at Missouri S&T, on the research titled “Investigating the Pervasiveness of Complex Seismic Anisotropy and Its Origin beneath Continents.” It is funded by the National Science Foundation Geophysics Program.