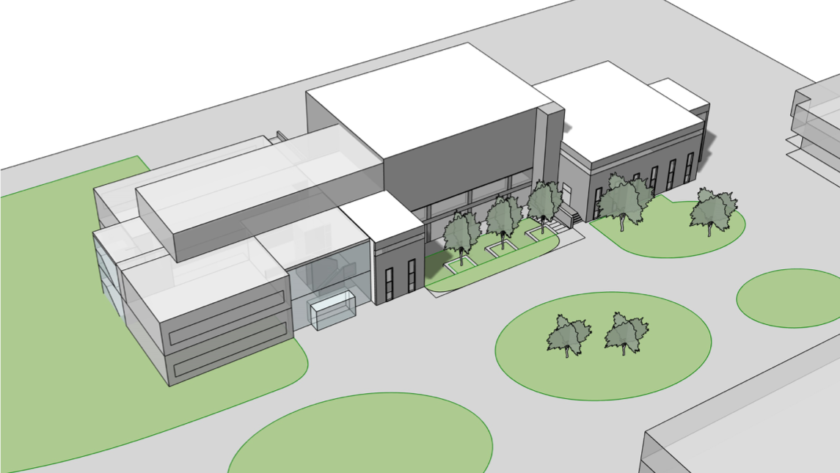 Two floors of new classroom space and a new lobby entrance will be added to the Computer Science Building.

Construction begins in July on a new Classroom Learning Center at Missouri S&T. Robert M. Williams Jr., president and CEO of St. Louis-based Williams Patent Crusher and Pulverizer Co., and a 1974 mechanical engineering graduate of Missouri S&T, has contributed $550,000 to the university in support of the project.

His gift will fund the learning center’s largest space, a 300-seat lecture hall, as well as a major area in the center’s main lobby.

“Missouri S&T’s enrollment has increased over the past 20 years, and with this growth has come a significant need for a large auditorium,” says Dr. Richard W. Wlezien, vice provost and dean of the College of Engineering and Computing. “We are grateful to Robert Williams and his family for providing Miners with a place where great minds can come together to grow, thrive and excel.”

The new Classroom Learning Center will add 15,900 square feet of space to the university’s centrally located Computer Science Building. In addition to the 300-seat lecture hall, the learning center will include four 100-seat classrooms and three student learning commons.

The lecture hall and main lobby space will be named in recognition of Williams and his family: wife Kathy, son Robert M. Williams III, who works for the family business in information technology, and daughter Ashley Williams, a 2009 Missouri S&T chemical engineering graduate who is a project and design engineer for the company.

“It is important to give back to the university that provided me with a world class education,” says Williams, who received an award of professional distinction from S&T in 2007. “We owe it to students to better the world however we can.”

Williams Patent Crusher and Pulverizer Co. is a fourth-generation, family-owned business founded in 1871. The company holds more than 500 patents and trademarks and is a global leader in manufacturing roller and hammer mills, pulverizers, crushers, refuse shredders, granulators, chippers and other heavy duty machinery used for size reduction.

Williams serves on the board of Missouri S&T’s Academy of Mechanical and Aerospace Engineers and has supported other S&T major projects including the Product Innovation and Creativity Center and the Student Design and Experiential Learning Center.

The new Classroom Learning Center is scheduled for completion by fall 2020. The $7.6 million project will be funded by private charitable contributions and university reserves. For more information, contact Rebecca Johnson, executive director of development, at johnsonnr@mst.edu or 573-341-4743.

On June 17, 2019. Posted in College of Engineering and Computing, Missouri University of Science and Technology, News, University News