Students use a driving simulator to test roadway design before construction 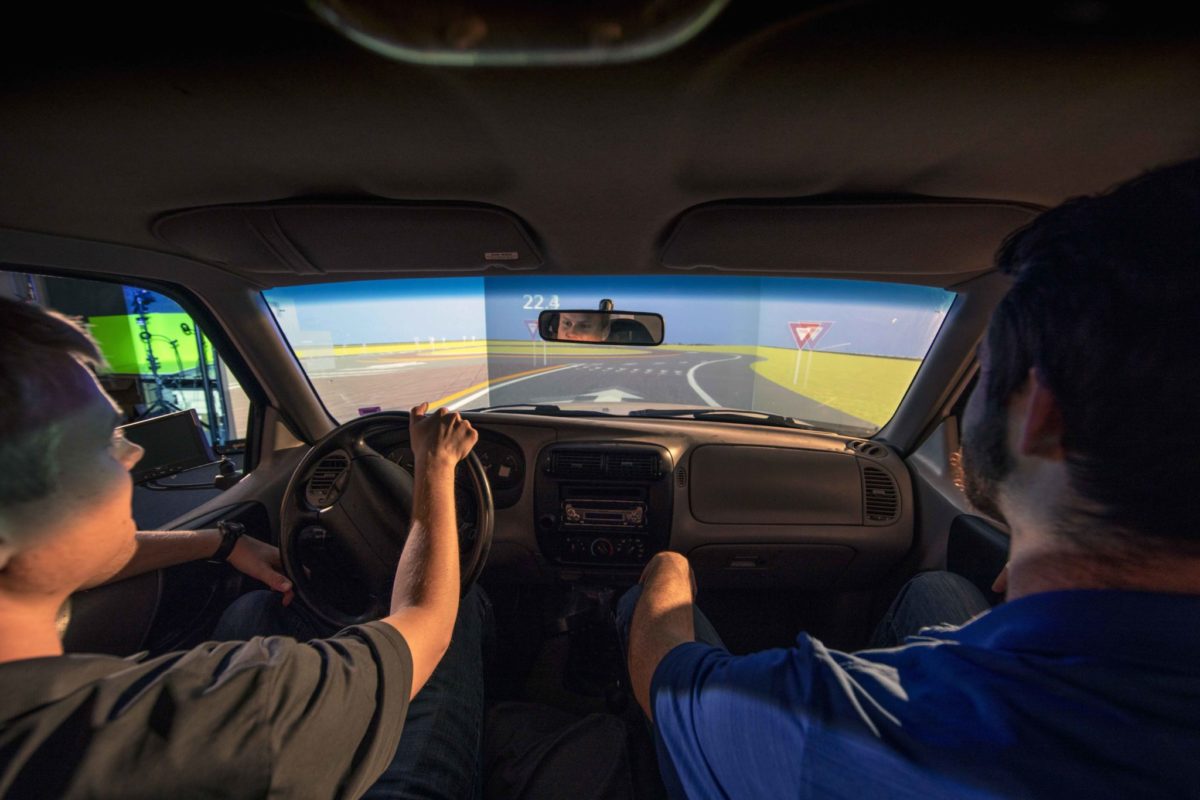 Students use a driving simulator on the Missouri S&T campus to test the Route 160 roadway design before construction. Photo by Tom Wagner/Missouri S&T, ©2019 Missouri S&T

The students worked with Crawford, Murphy and Tilly Inc. (CMT), a civil engineering firm with an office in Springfield, which designed the expansion of Route 160 to widen it from two lanes to four and replace some intersections with roundabouts. The company completed the design for the Missouri Department of Transportation (MoDOT).

CMT invested $30,000 in Missouri S&T student research to develop simulations of the existing and proposed roadway, using the driving simulator on campus, and test it with actual drivers. The firm decided to add the testing to establish a baseline of data on driver behavior for the existing roadway before and after the improvements.

“It’s a high-crash area with numerous fatalities in the corridor,” says Steve Prange, regional office manager for CMT in Springfield. “The corridor is a priority for MoDOT right now. There is a lot of traffic with younger drivers going from Springfield to Willard for high school. They’re young and inexperienced drivers that are traveling on a two-lane highway with a lot of truck traffic and intersections that make it challenging.”

Last summer, Doell learned the technical side of running the driving simulator. He taught himself a coding language called Python to program the simulator on campus.

DeMoss joined him in November 2018. He prepared and converted the design drawings from CMT for Doell to input into the simulator’s software. Then, they recruited 27 participants from ages 16 to 67 in the Rolla area to drive simulations of the current Route 160 and the proposed design of the roadway. They collected demographic data about each volunteer’s driving habits as well as their verbal comments while driving the two routes.

“That provided us with data about people’s maneuvering, speed and braking as well as their roadway position,” says DeMoss. “Afterwards, we asked them about their comprehension of the roadway and their comfort with the signing and the roadway navigation.”

“It gives us a great sample of people that drove the simulation with different age groups to see how they would react to the corridor,” says Prange. “This is a unique corridor. There aren’t too many corridors in the country that are a divided freeway design that utilize roundabouts at the intersections.”

Prange says roundabouts are becoming a more common solution to reduce driver speed and improve safety. He says CMT wanted to work with S&T to obtain data on the conditions before and after construction to help measure their benefits.

“Roundabouts are kind of a new thing for this area in the U.S.,” says DeMoss. “We wanted to make sure that the functionality and safety would be adequate before spending millions of dollars in construction to find what issues may arise.”

DeMoss and Doell say this sort of simulation research could benefit both engineers and departments of transportation.

“The simulator provides a viable option and a much cheaper way to evaluate the roadway and how it will interact with real drivers without having to spend millions of dollars to do so and having to go back and make changes afterwards,” says DeMoss.

“Especially with new ideas,” says Doell. “If they’re building another intersection, engineers have done quite a few of those, and they have data. But for something like the roundabout that’s new to this area, it helps a lot to have this simulation.”

The students say that their participants were comfortable driving the roadway in the simulation.

Prange says he looks forward to sharing the results with MoDOT. He says the roadway design is finished and construction will begin this summer and take about 18 months to complete. After construction, he wants to use the simulation data to compare the benefits between the existing roadway and planned improvements.

But Prange says a great benefit to the testing was the investment in the young engineering talent coming from Missouri S&T and giving them experience in design work.

“The biggest benefit for us is the collaboration between the young students and our staff and our designers here and sharing the results with MoDOT,” says Prange. “It’s been a great project.”

“I learned a lot with the analysis and evaluation of the functionality of roadway design – what things that drivers are focusing on the most and where we might need to put future focus on safety,” says DeMoss.

“It was an interesting joint adventure between the engineering management and civil department,” says Doell. “I was coming in and hard-coding the simulation and building it all, and the expertise in roadway design and running the tests came from the civil side. It was a fun collaboration between the two.”

DeMoss has interned with CMT for the past two summers and will join the Springfield office as a civil engineer after graduation.