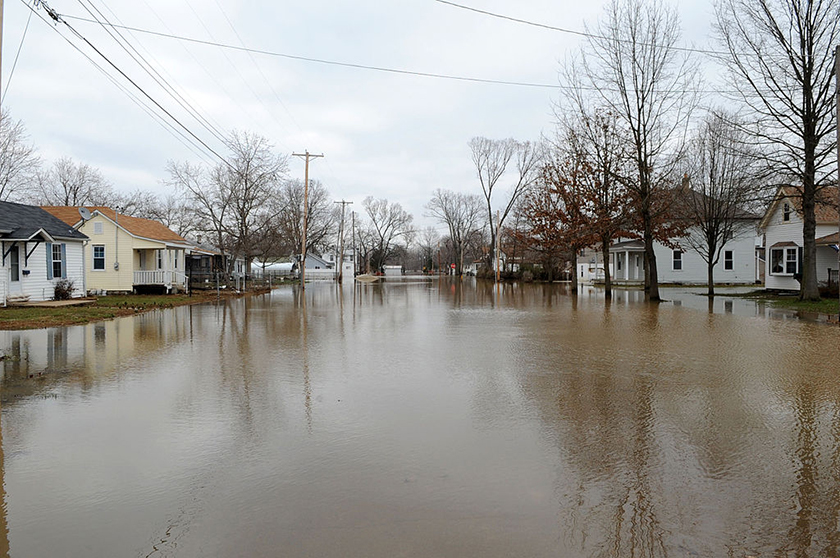 Missouri S&T researchers are using deep learning to design smarter ways to evacuate during floods, such as this 2008 event that flooded neighborhoods along the Meramec River in eastern Missouri. Photo by Jocelyn Augustino/FEMA

Artificial intelligence may soon help transportation agencies and first responders determine the best evacuation routes during floods such as those affecting portions of Missouri and the Midwest, thanks to the work of Missouri S&T researchers.

Drs. Suzanna Long and Steve Corns of Missouri S&T’s engineering management and systems engineering department are using a form of AI known as deep learning to develop forecasting tools to integrate water level rate of change as part of evacuation routing planning in flood-prone areas. Supported by funding from the Missouri Department of Transportation and the Mid-America Transportation Center, a U.S. Department of Transportation initiative based at the University of Nebraska-Lincoln, Long and Corns are also using geospatial data from the U.S. Geological Survey, the National Weather Service, and other public data sources to build their forecasting model.

“We’ll use river rise and current flood plain modeling efforts from partners as part of a deep learning model to develop algorithms to determine when and where traffic needs rerouted,” Long says. “We’ll use the ground truth from the current flooding to guide our solutions and as model inputs.”

Deep learning is a type of machine learning that imitates the human brain’s ability to process information and create patterns for use in decision making. Long and Corns will design their deep learning model to determine the best evacuation routes based on flood data, available roads for evacuation and traffic patterns.

For this research project, Long and Corns will use data from the Meramec and Missouri basins to train a deep learning neural network to determine how deep and how quickly floodwaters will rise. “This will be used to find relationships between the available data to increase the overall accuracy of the deep learning neural network,” says Corns, an associate professor of engineering management and systems engineering.

“This rate of rise is used to model evacuation or detour planning modules that can be implemented to assure the safety of the community and highway personnel, as well as the safe and secure transport of goods along public roadways,” Long adds.

The project also involves the creation of a routing algorithm to guide evacuations based on an assessment of available roads and their conditions. The AI involved here has to do with determining which roads are accessible during flooding as well as which can accommodate the traffic that would result from an evacuation.

“These modules can be linked to existing real-time rainfall gauges and weather forecasts for improved accuracy and usability,” Long says. “The transportation safety or disaster planner can use these results to produce planning documents based on geospatial data and information to develop region-specific tools and methods.”

Long and Corns received $124,000 in funding from MoDOT and MATC for the 12-month project, which is in its early stages. The recent flooding will provide the researchers with the latest information for developing their model.

The project combines Corns’ expertise in computational intelligence and complex systems with Long’s focus on disaster recovery. In 2013, Long and Corns worked with the USGS and the University of Puerto Rico at Mayaguez to develop a model to help city planners return their communities to their pre-event state after a large-scale disaster. That project was inspired by the EF-5 tornado that ripped through the southwest Missouri city of Joplin in 2011.

On April 2, 2019. Posted in College of Engineering and Computing, email, Engineering Management and Systems Engineering, Research