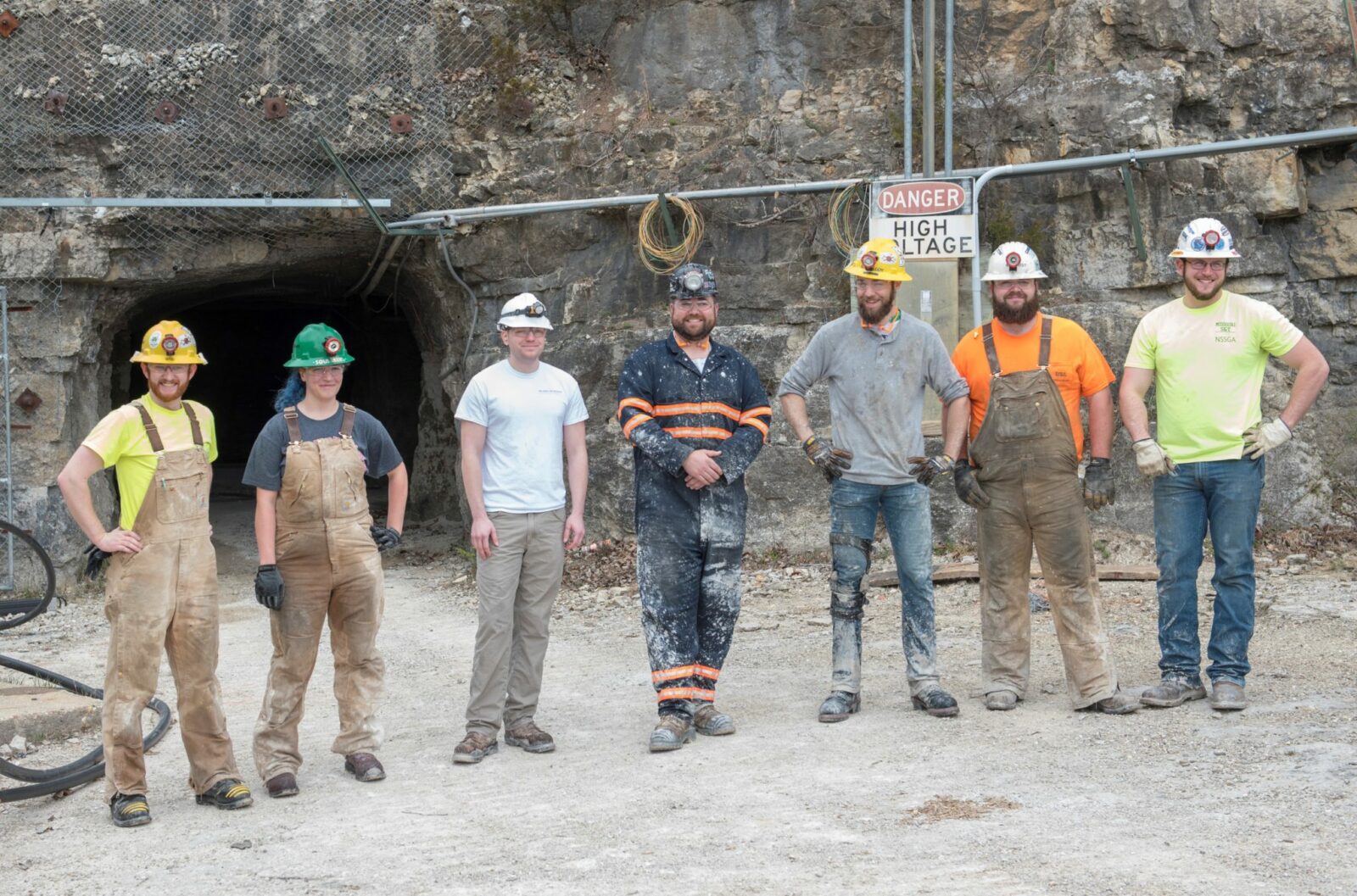 Dr. Kyle Perry (center) with students at the Missouri S&T Experimental Mine. Photo courtesy of the Missouri Chamber of Commerce

Mining engineering researchers at Missouri S&T plan to use explosives combined with common mining materials to test how well concrete seals in coal mine tunnels withstand high-speed projectiles. Their research could lead to improved designs of seals, which could improve coal mine safety.

To carry out their study, the researchers must build an “explosively driven projectile generator,” which lead researcher Dr. Kyle Perry describes as “a big cannon,” between 10 and 20 feet long.

Perry, assistant professor of mining and nuclear engineering at Missouri S&T, plans to load the device with “explosives, concrete blocks, hard hats, roof bolts and other materials that could be left behind in a mining tunnel, and we’ll throw that at a seal.”

The S&T researchers hope to determine the size and speed a projectile would need to travel to damage the seal.

Perry is working with Strata Worldwide, a mining safety services provider based in Atlanta, to build two concrete seals like the ones used in coal mines for the project. The testing will occur at Missouri S&T’s Experimental Mine.

“We will be building two seals – one 120 psi (pounds per square inch) and one 50 psi – and then Kyle will do his best to destroy them,” says Mike Fabio, senior development engineer at Strata.

Fabio is coordinating the concrete plan for building the seals used in the S&T experiment.

“This testing could really help with future designs of seals,” he says. “Are they actually strong enough to withstand the explosive forces? Are they too strong? Do we need to do anything more to modify the seal designs?”

S&T received a $249,000 grant from the Alpha Foundation for the Improvement of Mine Safety and Health, an organization formed as a result of one of the worst mining disasters in U.S. history – the one that killed 29 miners at the West Virginia Upper Big Branch Mine in 2010. The S&T mine was chosen because of its large-scale testing facilities and expertise.

The S&T researchers will test seal integrity in underground tunnels that miners close off after finishing with them. In the coal mining industry, no projectile testing has been done on the integrity of the seals since the implementation of new specifications set by the Mine Improvement and New Emergency Response (MINER) Act of 2006.

“Damaged seals could start leaking methane into the active portion of the mine,” says Perry. “That could become an explosive mixture and would be dangerous for the miners.”

The MINER Act was prompted by a 2006 mining accident at the Sago mine in West Virginia. That incident claimed the lives of 12 miners after lightning ignited methane gas in a sealed off section of the mine. The explosion and mine collapse sent debris and carbon monoxide into the working sections of the mine. The seal’s failure and subsequent leakage of carbon monoxide killed all but one of the 13 trapped miners.

Accidents like these have changed the mining industry’s focus from competing on production numbers to a focus on worker safety.

“There was always competition between companies on who could produce the most,” says Perry. “Now the pride symbol is how many days, weeks, months, years can you go without an accident.”

The project will begin this August and should be complete by April of 2020.

On July 25, 2018. Posted in College of Engineering and Computing, Research