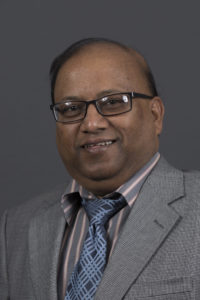 His research has applications in border patrolling and monitoring chemical leakage and troop movements in the battlefield, which require constant sensing capabilities using tiny sensors. He has used miniature devices called motes that self-organize to create a wireless sensor network and then send data securely to a given base station.

He is working with colleagues at Osaka University in Japan on a joint NSF and Japan Science and Technology Agency project to leverage big data and data analytics to transform disaster management for individuals and society.

Madria joined the Missouri S&T faculty as an assistant professor of computer science in 2000. He was promoted to associate professor in 2006 and to professor in 2012. He has been awarded multiple visiting summer faculty fellowships and grants by the Air Force Research Laboratories and won numerous S&T awards for faculty research excellence and outstanding teaching.

He has published over 250 journal and conference papers (including five IEEE Best Paper awards) and graduated 11 Ph.D.s and 31 master’s thesis students.

On April 26, 2018. Posted in College of Engineering and Computing, Computer Science, People