The statistics of human sleep 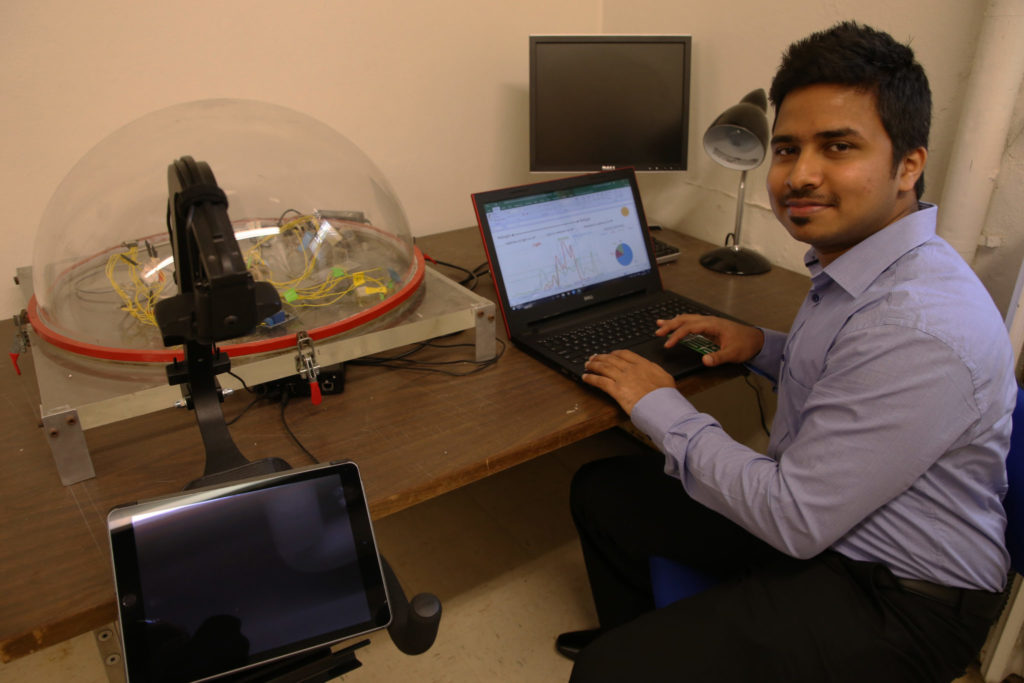 When Yogesh Lad traveled halfway around the world to pursue a master’s degree in systems engineering at Missouri S&T, he never imagined he would be spending so much time with biologists.

But now Lad, a native of Mumbai, India, has become an integral member of a research group made up of mostly biology students and researchers. And thanks to his skill as a data analyst, he’s bringing a valuable perspective to the research project.

Dr. Matt Thimgan leads the cohort, which is researching how sleep, or a lack thereof, affects both cognitive and physical human performance, especially in physically demanding, high-risk workplaces. The goal of the research is to help employers design work schedules that optimize the cognitive performance of their workforce and reduce the likelihood of accidents or risky decisions resulting from lack of sleep, Thimgan says.

“Once implemented, a business could offer educational opportunities for their employees on ways to improve their sleep,” says Thimgan, assistant professor of biological sciences at S&T. “The business could suggest to particular at-risk employees ways to improve their sleep for both the employee’s benefit as well as for the company’s benefit. Lastly, this research could be used to design better work schedules and identify employees that might be better off working particularly difficult shifts, like the overnight.”

To this end, Thimgan’s research team is developing a simple, objective and inexpensive test to assess an individual’s sleepiness based on physiologic measures. The test can be administered in less than one minute, says Thimgan.

Thimgan hopes that such a test can one day be used in industrial workplaces to prevent human-made disasters.

The cohort is currently monitoring 20 volunteer test subjects, with the intention of adding 20 more by 2018. The subjects, all undergraduate S&T students, are outfitted with smart watches that monitor their hand movements, body temperatures and light sensitivity. Such physiologic features are expected to give an indication of whether someone is sleeping, resting or active, says Lad. For example, if someone’s body temperature is low, her sensitivity to light is high, and her hand is resting for an extended period of time, the researchers assume that the person is either resting or asleep.

For this research, test subjects are called in to Schrenk Hall twice a day, two days a week to answer a series of survey questions about how sleepy they are and other questions about their recent sleep and daily activities. The researchers also take the subjects’ voice and balance measurements, key physical indicators of sleepiness, according to Thimgan. And finally, the subjects perform a number of cognitive tasks. Their survey answers, physical results and mental responses are then used to verify the data being recorded by the smart watches.

During this time, Thimgan also pulls the raw data off of the smart watches and hands it over to Lad. This is where Lad’s systems engineering expertise and data analysis acumen come in to play.

“His engineering analysis is critical to making sense of this massive biological and sensor data set,” Thimgan says.

Lad runs the raw data through an algorithm that he and his systems engineering colleagues have developed. The algorithm converts the data into graphs. Looking at the data, Lad can notice trends and outliers in sleep patterns. One thing that he’s already been able to identify is when someone is feeling under the weather. He says that several times he has noticed subjects with fairly consistent sleep patterns spike to 18-20 hours of sleep.

“This will help us to know if someone is healthy or if they have any sleep disorders,” Lad says.

Once he has analyzed the data for each individual participant, Lad groups the data according to sleep patterns.

“Using this method, we are clustering and grouping the sleep patterns,” he says. “People generally sleep for eight hours. Using that we can classify sleep and rest.”

Lad then compares the physical test results for the group of participants that slept an average of eight hours against outliers that slept less, or whose sleep patterns were more sporadic. Then he can look at how the groups of participants performed when they were active in terms of balance, eyesight, vocal delivery and other physical indicators of sleep, or a lack thereof.

“We want to be able to say that with this amount of sleep a person performed this well, and if they sleep for this many hours they can perform this much better,” Lad says.

The research aims to take sleep recommendations from the population level to understanding an individual’s sleep need, Thimgan adds.

Lad received a bachelor’s in mechanical engineering from the University of Mumbai. After working several internships at automotive companies in India, he decided to move away from the profession and toward data analytics. He chose systems engineering because it still involved industrial engineering but looked at bigger picture projects.

“I like managing things, and also doing optimization,” Lad says. “Using data you can do a lot of things. As I learned when I started working with this project, you can dig up any data and do anything you want with it. You can get really cool information out of it.

“I never thought of doing research about sleep,” he says. “Like, yeah, sleep, what is there to it? But we can look at a lot of things with sleep when we have data.”

“I actually approached Dr. Guardiola because I was looking for a professor who was doing some data analysis,” Lad says. “Then, we met in January and he asked me if I was interested in doing a group project.

“I’m new to this field, and using a project or some real-life experience can help me learn much about it.”

At first, Lad wasn’t sure about working on biomedical research.

“I said, ‘It looks more like bioscience,’” he says. “But (Guardiola) said, ‘No, no, there’s a lot of data.’ The data can do a lot of things just by using statistics. That’s what attracted me to this project. Now it’s getting more interesting as it progresses.”