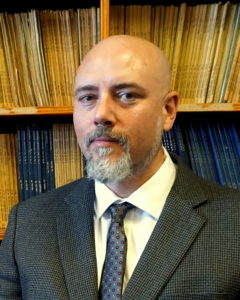 David Borrok, chair of geosciences and geological and petroleum engineering.

Borrok is inaugural director of the Louisiana geosciences school, which consists of undergraduate and master’s programs in environmental science and geology.

“Dr. Borrok is an internationally known geochemist whose research interests in isotopic and environmental geochemistry complement many ongoing programs at S&T,” says Dr. Richard K. Brow, interim vice provost and dean of the College of Engineering and Computing. “As director of the School of Geosciences at the University of Louisiana at Lafayette, he has worked closely with scientists and engineers associated with the oil and gas industry. These broad interests and experiences made him an outstanding candidate for the department chair position.”

In addition to his academic career, Borrok spent several years in the private sector, working as a mineral exploration geologist in the United States, Europe and South America and as a site manager and project scientist for a consulting company. He has also worked as a postdoctoral fellow with the U.S. Geological Survey.

“My new department is home to one of the most compelling and unique combinations of geology and petroleum engineering and science programs in the country,” Borrok says. “I plan to find and create opportunities to elevate each of the programs individually, and the department collectively.

“I couldn’t be happier to lead such an exciting and dynamic department. And returning to Rolla, where both my wife Peggy and I received our undergraduate degrees, makes the move that much more attractive.”

Borrok succeeds Dr. Francisca (Franca) Oboh-Ikuenobe, a professor of geosciences and geological and petroleum engineering who served as interim chair and remains on the Missouri S&T faculty.

“I want to thank Dr. Oboh-Ikuenobe for her outstanding leadership,” Brow says. “She’s been an excellent advocate for the department, both on and off campus. I know she is eager to return to her full-time responsibilities in the field, lab and classroom as a GGPE faculty member.”