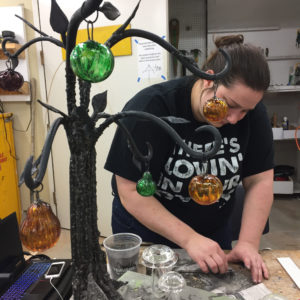 When it comes to materials science and engineering, there’s more than a bit of artistry involved. At any given time, its practitioners may tame glass, shape steel or push the boundaries of biomedicine.

That recognition of the common ground found in venues as varied as Missouri S&T’s hot glass shop and foundry and Winthrop University’s art galleries and sculpture gardens is driving an art-meets-engineering collaboration of S&T’s College of Engineering and Computing with kindred minds (and one set of actual kin) at the South Carolina liberal arts school.

The project began when Parker Freudenberger, a Missouri S&T doctoral student in ceramic engineering, was visiting her younger sister Chandlee at the public university in Rock Hill, S.C., near Charlotte.

Parker, a Graduate Assistance in Areas of National Need (GAANN) fellow whose research involves the study of phosphate glasses for optical applications, was asked to provide technical advice to a Winthrop art student.

From there, the exchange was born, with Chandlee Freudenberger coming to Rolla in December 2016 before Parker and Dr. Mary Reidmeyer, teaching professor of ceramic engineering, went to South Carolina in March.

In Rolla, the visiting artist worked in S&T’s hot glass shop and foundry, where she learned how to blow glass and refined her metal forging skills before joining a group of S&T students to design a sculpture – two halves of a metal tree, representing the two schools − that could be displayed either separately or together.

The Missouri S&T half of the sculpure. Photo by Sam O’Keefe/Missouri S&T

The metal work took place at Winthrop, with the S&T contingent in charge of the LED-lit fruits dangling from the tree limb and a pair of button mushrooms, all shaped from fluorescent glass.

Parker Freudenberger lectured at Winthrop on “Glass As An Art Material,” outlining its basic optical and thermal properties, from the refractive index, dispersion and color to ways to measure stress and viscosity. Her Missouri S&T doctoral adviser is Dr. Richard K. Brow, a Curators’ Distinguished Professor of ceramic engineering and interim vice provost and dean of S&T’s College of Engineering and Computing (CEC).

Beyond the sculpture (half of which resides at Winthrop, the other in the CEC offices), the exchange of ideas provided S&T’s engineers with an intimate look at the creative process.

“They look at things from a different perspective than Parker and I do,” says Reidmeyer, who is also outreach coordinator for the materials science and engineering department. “They’re not immediately constrained by what the material says they can do.”

Conversely, she says, “Some of the most successful artists I’ve ever met are the ones who do learn about the properties of the materials. Because then they know how far they can push.”

Reidmeyer’s own interests in art runs deep. Before becoming an engineer, the northeast Missouri native attended what was then Hannibal-LaGrange College for two years as an art major. Reidmeyer then transferred to Rolla to finish her undergraduate studies. She also received her doctorate from S&T.

Parker − who before going to Winthrop was already known among her younger sibling’s friends as the “glass sister” ─ describes a sense of “fearlessness” inherent in the artist’s creative process.

“A lot engineers get caught up in the rules,” she says. “You can calculate all you want, but sometimes you just have to go do it.”

The trip east was a homecoming of sorts for Parker, who received her bachelor’s degree in ceramic and materials engineering from Clemson University in 2014 in the sisters’ hometown of Clemson, S.C.

Shaun Cassidy, a Winthrop professor of fine arts, is working with his S&T counterparts on ways to extend the partnership beyond the recent exchange. As an artistic consultant for The Innovation Institute, a program that provides creativity training to Charlotte corporate, business and scientific leaders, he’s a vocal advocate for what he calls “cross-pollination.”

“As an artist, I’m always interested in collaborating with people with a different skillset than my own. It opens up the possibilities. You can’t get to innovation without going through creativity. But a lot of people have forgotten how to use the creative muscle.”

Chandlee Freudenberger hopes the nascent collaboration will mean fewer “missed opportunities” for scientists and engineers to team up with painters, sculptors and glassblowers.

The sculpture is on display on the second floor of Curtis Laws Wilson Library through Aug. 15 as part of a special summer exhibit.

Support for this project was provided in part by the National Science Foundation from grant DMR 12-07520.