From the deserts of Utah to the moons of Jupiter, Katelyn Brinker advances the future of space exploration

When the European Space Agency launches its mission to explore Jupiter’s moons in 2022, the ambitious effort will stay connected to Earth thanks in part to the work of Missouri S&T student Katelyn Brinker.

As an intern last summer at Southwest Research Institute in San Antonio, Brinker helped write the software for an ultraviolet spectrograph that will be aboard ESA’s Jupiter Icy Moons Explorer (JUICE) spacecraft. The instrumentation will capture close-up views of Jupiter’s three largest moons as part of the expedition and, thanks to Brinker’s work, transmit that information back to Earth.

It likely won’t be the last time Brinker’s work will provide us with a deeper look at space. The graduating senior who is a double major in computer engineering and electrical engineering has her sights set on a career focused on creating technology to enable future extraterrestrial exploration. She wants to build spectrometers, cameras and other instruments for future space missions. 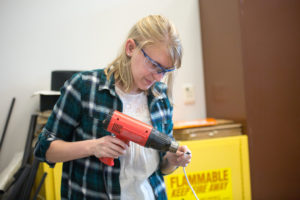 Missouri S&T senior Katie Brinker works on the Mars Rover at the Student Design Center. Brinker was named one of the IEEE-USA New Faces of Engineering, College Edition.
Photo by Jesse Cureton

First, though, she has her sights set on the annual University Rover Challenge. Brinker is one of 14 S&T Mars Rover Design Team members scheduled to travel in early June to Hanksville, Utah, where the desert terrain is similar to the red planet’s, for the international competition. The S&T team will pit its robotic rover, Gryphon, against similar creations built by teams from around the world to see which machine is best equipped to work alongside astronauts in future explorations to Mars. (Update: Missouri S&T won the international competition.)

Growing up in the small town of Highland, Illinois, 30 miles east of St. Louis, Brinker learned about engineering from her father (also an electrical engineer) and from Project Lead the Way courses in high school. Joining the Mars Rover Design Team during her first year at S&T piqued her interest.

“I wasn’t a total space nerd until I joined Mars Rover my first week of college,” she says. “Once I got involved with Mars Rover, I found there were a bunch of people interested in space technology, and team members were going to work for SpaceX or intern at NASA, and I thought that was pretty cool.”

She was also impressed by how well-organized the team was and by the group’s commitment to “wanting to make a difference” – not only by promoting space exploration, but by holding outreach programs in local schools and at events like the regional FIRST Tech Challenge robotics competition held each year at S&T.

“We’re doing something that’s very ambitious and very innovative, but it’s more than building a machine,” she says. “We’re also bettering ourselves and bettering our community.”

She jumped right into a leadership role her freshman year by directing the team’s public relations and outreach group. During her junior year, she served as the team’s chief technology officer, which essentially combined three jobs into one. “I acted as the project manager as well as the systems engineer” during the year, then became mission commander during the competition, she says.

This year, Brinker is on the group’s science team, which is responsible for running experiments at the team’s base station during the competition and building a mechanism to collect samples from the Utah terrain.

Brinker will return to Rolla in the fall for graduate school. Aided by a fellowship from NASA, she plans to continue work with Dr. Reza Zoughi, the Schlumberger Distinguished Professor of Electrical and Computer Engineering at Missouri S&T. Zoughi is director of the Applied Microwave Nondestructive Testing Laboratory, where Brinker has worked part time as an undergraduate research assistant since August 2015. There, she uses the lab’s microwave testing equipment to analyze materials for a variety of projects, from determining the porosity of clay pots used to filter water in Guatemala to studying simulated skin – made of agar, water and gelatin – for a Ph.D. candidate’s research on microwave imaging of severe burns.

For her capstone senior project, Brinker and fellow undergraduate researchers Matt Dvorsky, Cody Edwards and John Gallion are developing a microwave imaging system that could be flown on unmanned aerial vehicles to inspect aging infrastructure that is difficult to monitor from the ground – such as the tops or sides of bridges. This work will continue as one of the research areas of Missouri S&T’s Tier 1 University Transportation Center, which recently received a $1.4 million grant from the U.S. Department of Transportation.

Zoughi praises Brinker as a “remarkable, hard-working, intelligent and meticulous young lady” who has a bright future ahead of her.

“Her academic performance has been outstanding,” he says, “and yet she still finds time to be involved in so many worthy extracurricular endeavors, and does so with a very high level of energy and enthusiasm.”

Brinker, in turn, credits Zoughi for further inspiring her to conduct research.

“This undergraduate research experience has provided a lot of opportunities for me,” Brinker says. “I probably wouldn’t have gotten the NASA fellowship without it.”

Another part-time job on campus as a peer writing consultant in S&T’s Writing Center also may have helped her craft a compelling proposal to NASA, Brinker says.

Brinker will intern at NASA next summer, thanks to the fellowship. It will be her third internship as an S&T student. In addition to her work last year at Southwest Research Institute, she previously spent a summer at building materials company LafargeHolcim’s plant in Ste. Genevieve, Missouri. As an electrical engineering intern with the Swiss company, she created training documentation for electronic instruments like level, pressure and temperature transmitters.

As if Brinker weren’t busy enough with her double major, two part-time campus jobs, internships, design team involvement and, of course, her studies, she also serves as the undergraduate representative to the IEEE’s Instrumentation and Measurement Society Administrative Committee. Her involvement with that group earned her the IEEE-USA New Faces of Engineering, College Edition, earlier this year. The I&M Society encourages technical development and exchange of information among engineers and scientists in the instrumentation and measurement field, and Brinker’s involvement has taken her to Catania, Italy, and Taipei, Taiwan, for meetings. She will miss this spring’s trip to Turin, Italy, because she will be with her S&T colleagues in Utah for the University Rover Challenge.

By the time JUICE starts snapping images of Jupiter’s moons in 2030, Brinker may well be on her way developing new tools for space exploration. Whether it’s to Italy, Taiwan, Utah or the far reaches of our solar system, Brinker’s Missouri S&T education is helping her – and her work – go places.

On May 9, 2017. Posted in College of Engineering and Computing, Electrical and Computer Engineering, People, Student Life