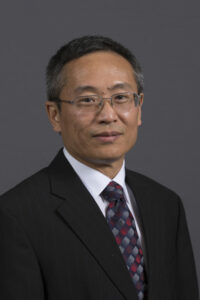 Dr. Xiaoping Du, Curators’ Distinguished Teaching Professor of mechanical and aerospace engineering at Missouri University of Science and Technology, has won the 2017 Governor’s Award for Excellence in Teaching.

Each year, the Governor’s Award is presented to one faculty member at each public institution of higher education in Missouri. This year’s recipients were honored during an April 7 luncheon hosted by Gov. Eric Greitens in Jefferson City, Missouri.

The awards, which are not monetary, are based on effective teaching, innovating course design and delivery, effective advising, service to the university community, commitment to high standards of excellence and success in nurturing student achievement.

Before joining the Missouri S&T faculty, Du held positions at the University of Illinois at Chicago, the University of Iowa and China Southwest Petroleum Institute. He also worked as a senior design engineer at Mechatronics in Michigan.

Du is a Fellow of the American Society of Mechanical Engineers and a member of the International Society of Structural and Multidisciplinary Optimization and the American Society of Engineering Education. He serves as associate editor for the Journal of Mechanical Design and for IISE Transactions, as review editor of Structural and Multidisciplinary Optimization, and as a member of the editorial boards of three other professional journals.