Three members of the Missouri University of Science and Technology faculty have been chosen to receive President’s Awards, the highest honor bestowed by the University of Missouri System, for excellence in advancing the mission of the university. In all 10 awards were presented to UM System faculty this year. They will be formally honored at an awards celebration in June.

Winners from Missouri S&T are:

Dr. Bonnie Bachman
, professor and faculty fellow in economics at Missouri S&T, received the President’s Award for Innovative Teaching. The award, which includes a $5,000 prize, recognizes outstanding faculty who employ novel and innovative teaching methods to achieve success in student learning. The award was presented by Dr. Bob Schwartz, interim vice president for academic affairs at the UM System. 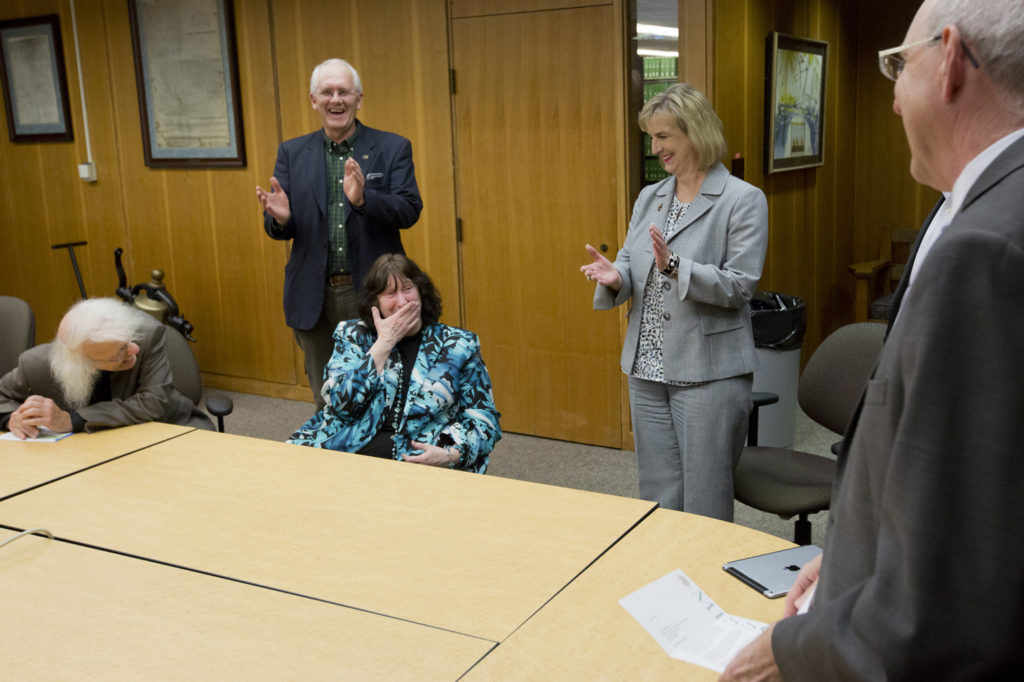 “My teaching philosophy has three main elements,” Bachman wrote. “To: (1) incorporate active learning elements with the end result of helping students develop more than knowledge, but skills and skill sets necessary to be successful now and after graduation, (2) give back to faculty colleagues by developing a community of practice focused on enhancing the innovation and entrepreneurship curriculum and culture; and (3) extend best practices in curriculum development and institutionalization beyond the walls of the campus.”

Bachman joined the S&T faculty in 2007 and has since been the recipient of multiple grants and awards including the 2016 Faculty Experiential Learning Award, the 2013 Outstanding Teaching Award for Distance Education and a 2015 Innovation Fund-Innovation Center grant to develop a faculty curriculum development program. She has been instrumental in developing experiential interdisciplinary courses for Missouri S&T and the entrepreneurship program at the University of Missouri-Columbia.

“Bonnie works tirelessly to improve her curriculum and engagement with students and faculty,” wrote Dr. Greg Gelles, chair of economics at Missouri S&T in a nomination letter. “We are proud to have her in the department and support her efforts to integrate active and experiential learning, games and critical thinking, and assessment development into the fabric of curriculum and activities at multiple campuses in the UM System.”

Most recently, Bachman developed a new course offering titled Innovation and Entrepreneurship at the Trulaske College of Business at MU.

“With a strong reputation in the innovation and entrepreneurship fields both within higher education and in the broader corporate world, Bonnie is beyond classification as simply a top-tier professor in the academic field of innovation,” said Dr. Kathleen Dolan, director of the execMBA Program at the Trulaske College of Business. “She is, quite simply, considered one of the absolute best.”

Dr. Ming Leu, the Keith and Pat Bailey Missouri Professor of Integrated Product Manufacturing, received the President’s Award for Leadership. The award, which includes a $5,000 prize, recognizes faculty who have provided exemplary leadership to one of the four UM System campuses through commitment to excellence and integrity in their leadership roles. The award was presented by Missouri S&T Provost Robert J. Marley. 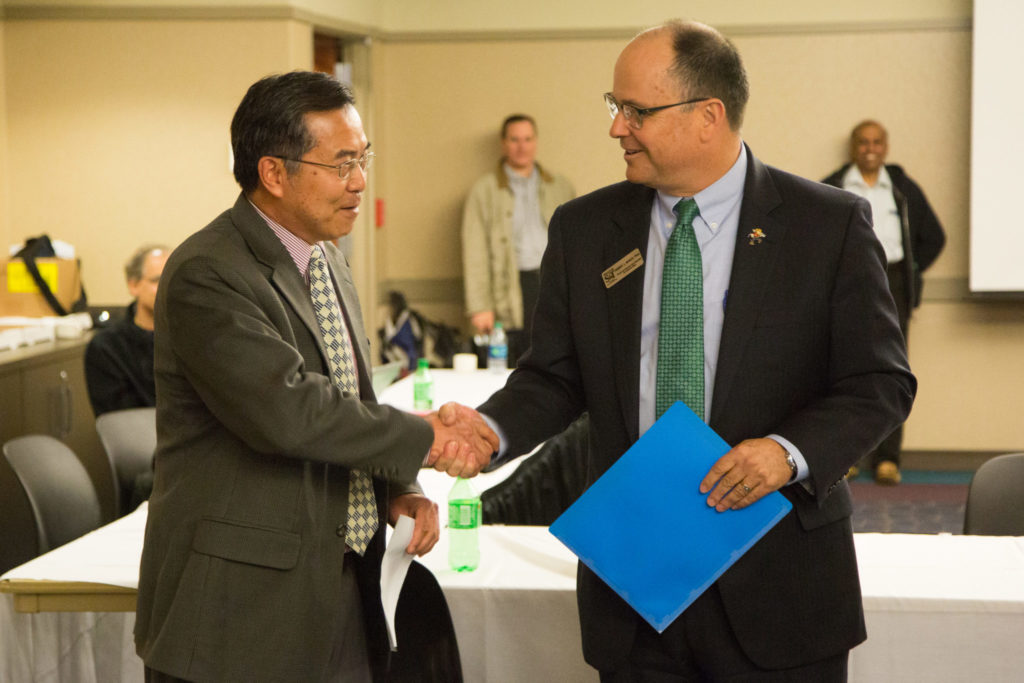 Leu also serves as director of the Center for Aerospace Manufacturing Technology (CAMT) and the Intelligent Systems Center (ISC).

“Dr. Leu’s contributions go way beyond the tremendous accomplishments in his leadership and scholarship,” wrote Dr. K. Krisnamurthy, professor of mechanical and aerospace engineering, in his nomination letter. “He leads by example and his passion and tireless efforts to make a difference are clearly demonstrated in his role as the director of two research centers, ISC and CAMT, that are advancing engineering science and solving significant real world problems as well as fostering collaboration among faculty from a number of departments.”

The Center for Aerospace Manufacturing Technology (CAMT) and the Intelligent Systems Center (ISC) accelerate the research, development and transfer of advanced manufacturing technologies to the U.S. aerospace supply chain. Under Leu’s leadership, the ISC has one of the highest returns-on-investment of any center at S&T averaging approximately 12 externally sponsored grant dollars for every internally invested dollar.

“I believe the hallmark of Ming’s career has not only been consistent funding, scholarly production and graduate student mentoring but his desire to include others in his success,” wrote Dr. James Drallmeier, Curators’ Distinguished Teaching Professor of mechanical and aerospace engineering. “The leadership he has shown in his research centers has created a cooperative and productive environment among faculty across the campus and encouraged several industries to come partners in growth.”

Leu has published 410 referred publications in technical journals and conference proceedings, one e-book, nine book chapters, five U.S. patents and eight edited volumes of conference proceedings and delivered more than 300 technical presentations. Since joining Missouri S&T, he has obtained more than $28 million in external grants that enabled research for the Department of Energy, the Department of Defense, Ford Motor Co., Lockheed Martin Co. and many others.

Throughout his career, Leu has supported 40 junior faculty members and post-docs through collaborative projects and team proposals and has mentored 26 Ph.D. students and more than 90 master’s students through to graduation.

“Few faculty on this campus have had as much impact on the development of young researchers as Ming. As an example, Ming handed over the reins of CAMT to an eager, high-performing, associate professor in 2015,” wrote Drallmeier. “To relinquish the directorship of the robust consortium that he created clearly illustrates Ming’s leadership and attentiveness to the growth of others.”

“Dr. Leu clearly stands out as a leader in the field of advanced manufacturing technologies as proven by his extensive collaborative research work with industry, as wells as being selected to lead Missouri S&T’s Advanced Manufacturing Best-in-Class strategic hiring initiative,” wrote nominator Kamal Khayat, director of the Center for Infrastructure Engineering Studies. “This is an area of vital importance to our nation’s manufacturing competitiveness and Ming has made great strides to further the state-of-the-art in this field.”

Dr. Daniel Oerther, professor of environmental engineering at Missouri S&T, received the President’s Award for Cross-Cultural Engagement. The award, which includes a $5,000 prize, recognizes faculty who promote cross-cultural engagement through education, research and service. The award was presented by Dr. Bob Schwartz, interim vice president for academic affairs at the UM System. 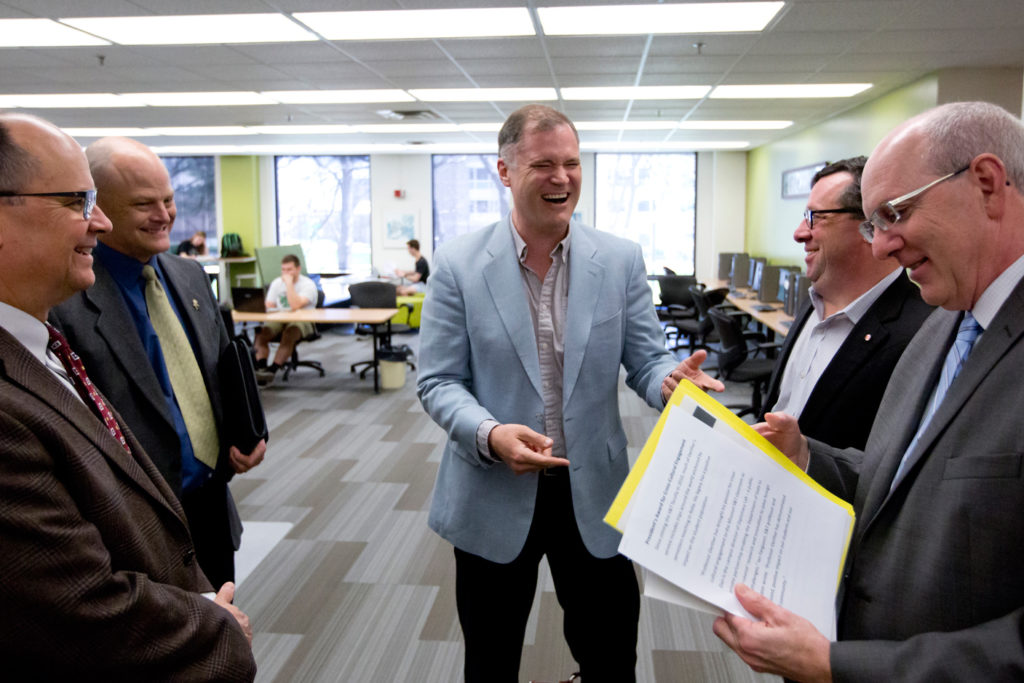 Since joining the S&T faculty in 2010, much of Oerther’s service includes trips around the world anchored by semesters teaching in Rolla. His legacy has a positive impact on the student population.

“Professor Oerther has brought his passion for cross-cultural engagement to the Missouri S&T classroom as Dan is the campus director of Diplomacy Lab – a public-private partnership enabling the Department of State to ‘course-source’ research and innovation to solve foreign policy challenges,” wrote Dr. Ian Ferguson, professor of electrical and computer engineering, in his nomination letter. “Professor Oerther has demonstrated a profound, positive impact on our students and our global community.”

Outside of the classroom, Oerther has led students on trips to Kenya, Tanzania, India, Brazil and Guatemala, working to provide clean drinking water to more than 100,000 rural villagers. In addition, he illustrated ‘intentional living’ to the Rolla community by living for three years, with his family of four, in a solar house located in the Missouri S&T Solar Village.

“Dan is more than my ‘teacher.’ He’s a ‘co-learner’ with me,” wrote Lee Voth-Gaeddert, a Ph.D. student currently working with the Peace Corps in Guatemala, in a nomination letter.

In 2014, Oerther was named a foreign affairs officer for the U.S. Department of State in Washington, D.C., working for clean water and food security around the globe. The job, according to Oerther, consists of “fighting terrorism, protecting U.S. interests abroad, and implementing foreign policy initiatives while building a freer, prosperous and secure world.”

Oerther has been recognized on local, regional and national levels for his work as a professional engineer and a leader of science diplomacy.

“Dan’s my role model and my mentor; he’s my biggest supporter and harshest critic; and he’s the perfect candidate for the President’s Award,” wrote Voth-Gaeddert.