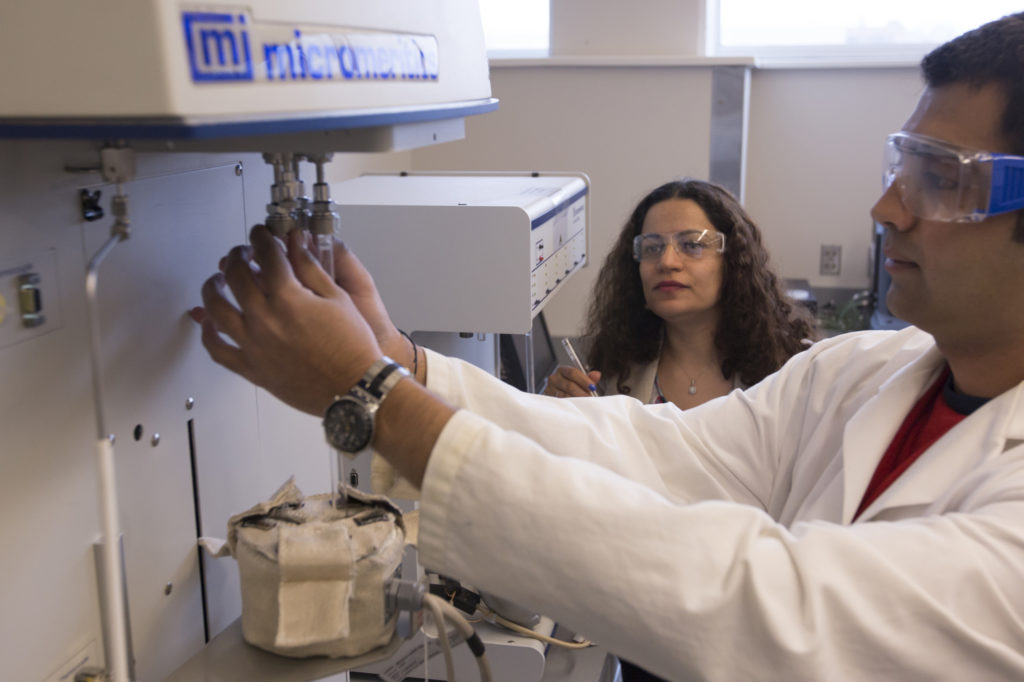 A Missouri University of Science and Technology researcher and her team are developing technology that could help keep astronauts safe from carbon dioxide buildup during flight and aboard the International Space Station.

Dr. Fateme Rezaei, assistant professor of chemical and biochemical engineering at Missouri S&T, and the team have developed “robust structures” in mechanically strong configurations that are comparable to powders in adsorbing CO2. Their findings were reported in the American Chemical Society’s Applied Materials & Interfaces publications in September 2016 and February 2017.

Besides keeping astronauts safe, the technology can improve the reliability and efficiency of current CO2 removal systems. The work also could lead to the development of cost-effective and energy-efficient adsorbent systems for purification of other gas streams. Industrial gas separation processes include natural gas purification, olefin/paraffin separation and hydrogen gas separation.

In the study published in September, Rezaei’s team made 3-D printed 13X and 5A zeolite monoliths with novel structures — honeycombs in crosshatch patterns — to capture CO2 from the air. (“13X” and “5A” are commercial names of two types of zeolite materials.)

Results indicated that 3-D printed monoliths with high zeolite loadings show adsorption capabilities comparable to that of powder sorbents, she says. The adsorption capacities of 5A and 13X monoliths were 1.59 and 1.60 millimol per gram, respectively, using 5,000 ppm (0.5 percent) CO2 in nitrogen at room temperature.

“The 3-D printing technique offers an alternative, cost-effective and facile approach to fabricate structured adsorbents with tunable structural, chemical and mechanical properties for use in gas separation processes,” she says.

In the study published in February, the team then made other types of CO2 adsorbent monoliths with the same 3-D printing method. The monoliths were fabricated using silica supported amines (aminosilica). This class of materials has shown promising performance in capturing CO2 from gas streams. Like zeolites, 3-D printed aminosilica adsorbents exhibited similar adsorbent characteristics to their powder analogues.

The amount of CO2 removed by each honeycomb depends on its “adsorption capacity,” Rezaei says, which is defined as a millimol of CO2 per kilogram of the adsorbent. Carbon dioxide removal by the monolith is a cyclic process, which means that once it is adsorbed and the monolith is saturated, it should be heated to remove the adsorbed CO2 to start the next cycle.

These approaches are very scalable in comparison to beads or pellets, Rezaei says.

For the PEI and TEPA aminopolymers, direct extrusion of the premade materials into a monolith was found to be the best way to formulate these adsorbents. For APS, post-functionalization of a bare silica monolith was a workable strategy for their formulation.

“More work must be done in order to further optimize the paste and printing conditions for this class of materials,” Rezaei says. “Overall, on the basis of our findings, the 3-D printing technique appears to be a promising method for shaping amine-based adsorbents into practical contactors, such as monoliths that can be easily applied to large-scale gas separation processes.”

On March 29, 2017. Posted in Chemical and Biochemical Engineering, College of Engineering and Computing, Featured, Research

One thought on “Researchers work on carbon dioxide capture systems”