Materials science expert to give A. Frank Golick Lecture at Missouri S&T 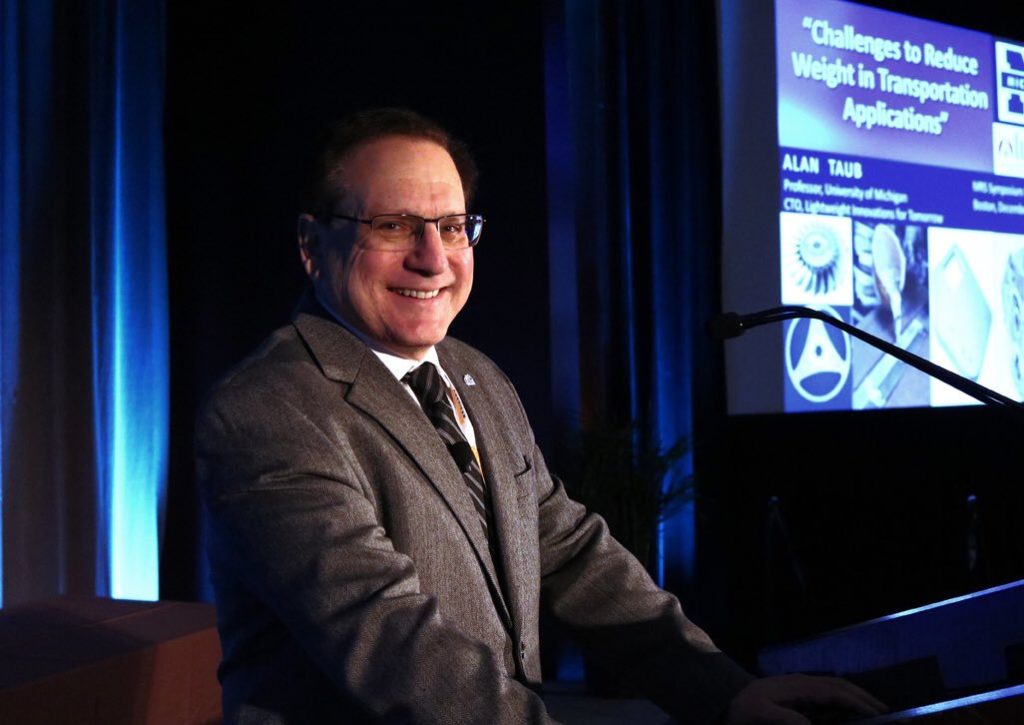 University of Michigan professor Alan Taub says finding ways to move products more efficiently is one of today’s big challenges. He will give lectures April 20 and 21 at Missouri S&T.

His lecture titled “Aligning Carbon Nanotubes in Polymer Matrices by Applying Electrical, Magnetic and Shear Forces” will be held at 3:30 p.m. Thursday, April 20, in Room 204 McNutt Hall on the Missouri S&T campus. It will be of particular interest to materials scientists and material science students. Refreshments begin at 3 p.m. in the McNutt Hall Commons.

On Friday, April 21, Taub will give the lecture titled “Challenges to Reduce Weight in Transportation Applications” at noon in St. Pat’s Ballroom C of the Havener Center. Both lectures are free and open to the public.

In his lecture Thursday, Taub will talk about carbon nanotubes (CNTs) and their addition into polymer matrixes. The effects of processing parameters such as sonication on the degree of achievable alignment as well as its implications will be discussed. The results offer guidance for the design and fabrication of highly-aligned CNT/polymer composites.

His talk will provide an overview of the challenges and describe how new materials and processes, coupled with integrated computational materials engineering, are advancing the technology.

Friday’s lecture will highlight that new solutions are needed to reduce the weight of the machines that move people and goods on land, sea and air, says Taub, a professor of materials science and engineering and mechanical engineering at the University of Michigan-Ann Arbor. The potential for reducing weight using high-strength steels, aluminum, titanium and magnesium alloys is well established. The key is to achieve the weight reduction economically.

“This requires optimization of the material properties and processes together with robust design tools and joining technologies to enable multi-material structures,” he says.

Lightweight Innovations for Tomorrow (LIFT) was established to accelerate adoption of advanced metals and serves as the bridge between basic research and final product commercialization. Industry partners, in collaboration with a network of universities and federal laboratories, are developing the next generation of advanced manufacturing processes.

Taub earned a bachelor of science degree in engineering in 1975 from Brown University. He earned a Ph.D. in applied physics in 1979 from Harvard University. He was the vice president of GM Global Research and General Motors Co.; chief technical officer of LIFT; managed Ford Motor’s material science department; and was a senior lecturer on materials science at Massachusetts Institute of Technology.

The A. Frank Golick Lecture Series at Missouri S&T is named after a 1918 metallurgical engineering graduate. It was created in 1969 through a memorial fund established by Golick’s widow, Loree, to attract nationally recognized metallurgical engineers to the campus to interact with the faculty and students, and to present a lecture series.

Golick was associated with several ferrous and nonferrous metal producers during his early career. He developed a number of important new applications for both classes of metals before moving into the marketing field upon joining LaSalle Steel Co. in 1939. His successful career in the steel industry resulted in his appointment as vice president for sales in 1946, a position he held until his death in 1966.

During his long association with LaSalle, Golick pioneered the market developments of many cold-finished steels and developed successful sales campaigns, which established markets for several steels that are now widely used. During his lifetime, he authored many technical articles relating to the use and treatment of steel.

On March 30, 2017. Posted in College of Engineering and Computing, Featured, Materials Science and Engineering, People