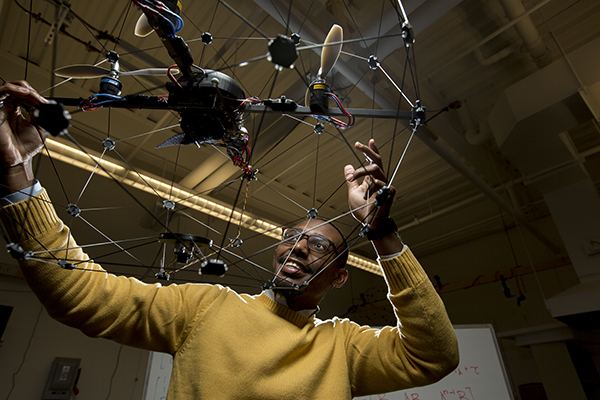 George Holmes, a Ph.D. candidate in mechanical engineering from Florissant, Missouri, is one of 19 GAANN recipients at Missouri S&T. Sam O’Keefe/Missouri S&T

Many of the nation’s future engineering and science researchers are preparing for their careers in the laboratories of Missouri University of Science and Technology, thanks to more than $2.2 million in federal funding through a program designed to encourage more students to pursue Ph.D.s in those fields.

The program, called Graduate Assistance in Areas of National Need, or GAANN, is a U.S. Department of Education program designed to draw more Ph.D. students into the nation’s universities and encourage them to pursue careers in research in academia, national laboratories or the private sector. The U.S. Department of Education program provides GAANN fellowships for graduate students with excellent academic records who demonstrate a financial need.

Increasing the number of Ph.D. students in the U.S. is critical to the nation’s future global competitiveness, says Dr. Mariesa Crow, vice provost for research at Missouri S&T.

“Numerous studies have pointed out the need in our country for more professionals in the STEM (science, technology, engineering and mathematics) fields in order to remain competitive in the world economy,” Crow says. “We also need educators in these fields to prepare future generations of engineers and scientists. Programs like GAANN can help provide more educators and researchers in these disciplines to help meet our need for a STEM-focused workforce.”

In recent years, Missouri S&T has received over $2.2 million through GAANN and is expected to receive another $1.47 million. The funds support master’s and Ph.D. students in six academic departments at Missouri S&T: civil, architectural and environmental engineering; computer science; electrical and computer engineering; materials science and engineering; mechanical and aerospace engineering; and mining and nuclear engineering.

Currently, 19 Missouri S&T students are supported through the GAANN program, with funds available for five more.

For more information about GAANN and other graduate study opportunities at Missouri S&T, visit the office of graduate studies.