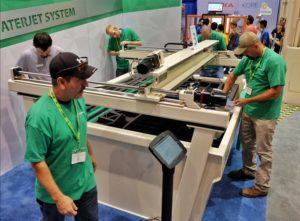 The Missouri S&T Rock Mechanics and Explosives Research Center team won a new WARDjet waterjet during a competition in September in Chicago. Wearing green T-shirts, from left team members Jay Schafler, Marty Langenderfer, John Rueschmann and Jeff Heniff put together a WARDjet to win the competition. It was installed at Missouri S&T on Tuesday, Nov. 1.

A team of Missouri University of Science and Technology students helped bring a new waterjet cutting machine to campus — and the machine will help propel research into expanding areas and show new uses for the technology.

During the International Manufacturing Technology Show (IMTS) Sept. 12-17 in Chicago and as part of the Smartforce Student Summit Build It! Challenge, sponsored by WARDjet, student teams competed against industry professionals. WARDJet’s build-off competition offered teams a chance to win a waterjet cutting machine.

Teams had one hour to plan, assemble and wire a complete high-end waterjet system. As the waterjet machines were completed, WARDJet’s experts judged and scored the machines based on assembly precision, mechanical and electrical skills, overall build quality, and machine motion.

Missouri S&T’s Rock Mechanics and Explosives Research Center (RMERC) four-person team was sponsored by Dr. Grzegorz Galecki, associate professor of mining engineering and director of the RMERC waterjet lab. The team was led by Jeff Heniff, research engineering technician at RMERC, and it was the only team to completely assemble the machine from its beginning components and have it operational within the one-hour time frame. The team also was judged to be the winners based on the overall functionality of the assembled machine.

“We said, ‘Why don’t we let people come up and build the machine,’ ” says WARDjet president Rich Ward. “That’s what it was about. We thought that by the end of the week, we would have it built.

“It was built every single day.”

The grand prize for the competition was a new, complete WARDJet 5×5 WARDKIT waterjet system valued at more than $80,000. Dr. Norbert Maerz, director of RMERC, expressed his gratitude to the students, staff and to WARDJet for the new waterjet cutting system. which will expand the research capability of the waterjet lab.

On Tuesday, Nov. 1, Missouri S&T unveiled the WARDjet waterjet at the RMERC. Powered by a Hypertherm pump, the waterjet cut through metal with ease, creating intricate designs that included the S&T logo. The WARDjet replaces the lab’s aging, 40-year-old waterjet.

“If there was a museum for waterjet machines,” says Heniff, “our old machine would be in it.”