Being the best can be as much a curse as a blessing. Dr. Laura Bartlett, associate professor of materials science and engineering at Missouri S&T, is living proof.

Bartlett came to S&T in the fall of 1993 as a mechanical engineering student. But Bartlett “was more interested in the social aspects than the courses,” she says, and after three years and change she left Rolla without a degree. For a person who was smart enough to make her own fireworks (charring the driveway in the process) and breezed through high school, it was a sobering experience.

She couldn’t see it then, not through the disappointment and the regret, that leaving S&T was just the beginning of her journey, not the end. She couldn’t see that she would be back at S&T, earning bachelor’s and doctoral degrees in metallurgical engineering, the latter as part of the federal Graduate Assistance in Areas of National Need (GAANN) program. She couldn’t see the resolve that led her to where she is today.

After leaving school, Bartlett worked for years in jobs that had nothing to do with mechanical engineering.

There was the job on a print production line, 12-hours shifts of lifting and loading 20-pound bales of papers. She went home after work, bone tired.

There was the job at a dog food factory. The smell of dog food permeated her clothes, her hair, her home.

There was a job cleaning motel rooms.

“I did a lot of very, very hard jobs,” Bartlett says.

And there was a job as a waitress in Ravenden Springs, Arkansas, population 137, her husband, Chris’ hometown.

Waiting tables one day in 2005, she overheard a diner mention something about the university in Rolla, Missouri. She struck up a conversation with the man, Tom Baird, a computer science professor at Missouri S&T, and in the course of that talk, she mentioned that she wanted to get back to Rolla. Baird encouraged her to contact Jerry Bayless, associate professor of civil, architectural and environmental engineering at S&T.

“That night, I couldn’t sleep,” Bartlett says. “I was very apprehensive about making the call because frankly I didn’t know if I could still do well after being out of school for so long.”

By that time, it wasn’t just her and Chris she had to think about. Son Christopher, now a 13-year-old middle school student, was in the picture. “I wanted something more for him,” Bartlett says.

She made the call. And when her family’s tax return came in, she said, “Let’s go.” 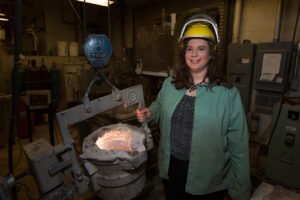 Bartlett returned in 2005 as a mechanical engineering student, but one day she went to Missouri S&T’s foundry to watch molten iron being poured.

With a bachelor’s degree in hand in 2008, she had an offer to work in a steel mill, but she was worried that she would be out of a job if the economy got worse. Looking around for something more stable, she was encouraged to apply for a GAANN fellowship that focuses on training the next generation of researchers and professors.

“It turned out to be the best thing,” Bartlett says. “I never would have thought 15 years ago that I would fall into this line, to be a professor and a teacher.”

As a GAANN student, she had to pass another test, to teach one course by herself, start to finish. It was a course taught by her dissertation advisor, Dr. David C. Van Aken, Curators’ Distinguished Teaching Professor of materials science and engineering. Determined not to let Van Aken and herself down, she found her footing teaching Mechanical Testing of Materials and passed that, test, too.

And then she did what the GAANN program prepared her to do by accepting a job as an assistant professor at Texas State University.

At Texas State, Bartlett was involved in the Foundry Educational Foundation, which is a consortium of about 20 universities with a metals casting program. Bartlett helped lead open foundry days where middle school and high school students would tour the school and the foundry.

They put the students in three groups, and watching them in the foundry was the payoff, seeing the kids light up, their wonder and imaginations ignited by glow of red-hot molten steel. (She hopes to set up a similar program at Missouri S&T.)

But when the offer came in to be Missouri S&T’s Robert V. Wolf Professor in Metallurgical Engineering, it didn’t take Bartlett long to decide that Rolla was where she wanted to be. She is one of 26 new faculty to join S&T this fall.

Now she gets a chance to help students at her alma mater, whether it’s professionally or through life lessons she learned the hard way. Bartlett looks back on all the tough jobs she had, and she says they taught her things she uses now, like how to identify with all different kinds of people. And she believes that experience makes her more in touch with her students.

“If I see a student is struggling and going down the wrong path, I can tell them my story, that they can turn their fortunes around,” she says. “I think that’s a very powerful message.”

On September 13, 2016. Posted in Alumni, College of Engineering and Computing, Materials Science and Engineering, People