Missouri S&T alumnus named to Board of Curators 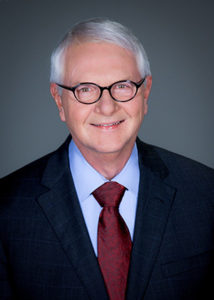 Thomas R. Voss, a 1969 electrical engineering graduate of Missouri S&T and the former chief executive officer of Ameren Corp., was recently appointed to the University of Missouri System Board of Curators by Missouri Gov. Jay Nixon.

“Tom is an excellent choice to serve on the Board of Curators,” says Missouri S&T Chancellor Cheryl B. Schrader. “He is an outstanding business and community leader whose dedication to higher education and community service will serve our university, system and state well.”

As CEO of the utility company Ameren, Voss led a complex, regulated business enterprise, and that experience gives him a valuable perspective, Schrader says. “Tom will bring unique insights to the board, just as he has done as a member of the Missouri S&T Board of Trustees,” Schrader says. “His appointment is particularly timely, as he has both passion and experience in leading transformational diversity and inclusion initiatives.”

Voss is now chair of Smart Wires, a global grid optimization company based in the San Francisco Bay area. He previously served as chair of the St. Louis Regional Chamber and led the chamber during its nine-month national search for a president and CEO.

At Missouri S&T, Voss is a member of the Academy of Electrical and Computer Engineering and the Order of the Golden Shillelagh. Upon accepting Nixon’s nomination to the Board of Curators, he resigned from his position on the Missouri S&T Board of Trustees.