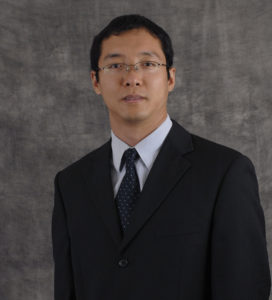 Missouri S&T assistant professor Xiaodong Yang was one of 47 recipients of the 2016 Office of Naval Research Young Investigator Award. There were 280 applicants for the award.

“The ONR YIP is one of the oldest and most selective scientific research advancement programs in the country,” according to the Office of Naval Research. “Its purpose is to fund early career academic researchers — called investigators — whose scientific pursuits show outstanding promise for supporting the Department of Defense while also promoting their professional development.”

This year, 47 scientists from 34 academic institutions across the country were selected from 280 applicants “based on past performance, technical merit, potential scientific breakthrough and long-term university commitment.” Yang is one of the awardees “whose exceptionally creative research holds promise across a range of naval-relevant science and technology areas.”

Supported by this award, Yang will conduct research on “Negative Optical Torque Generation in Plasmonic and Dielectric Metasurfaces.”

In mechanical and aerospace engineering, gas, steam and water turbines have been widely used. These are rotary mechanical devices that extract energy and power from fluid flow and convert the mechanical rotation into useful work, Yang says. Here, he will use metamaterials to realize microscale optical turbines so that mechanical torques will be extracted from the angular momentum of light, instead of fluid flow. The tunable optical torque generation in metasurfaces will be demonstrated through his work, including the counterintuitive negative torque.

Yang joined the Missouri S&T faculty in 2011 from the University of California, Berkeley. He earned a Ph.D. in mechanical engineering from Columbia University in 2009. Yang established the Nanoscale Optics Laboratory at Missouri S&T, and his group has made tremendous research progress in the field of nanoscale optics and photonics, especially in metamaterials and metasurfaces. Yang also won the NSF CAREER Award early this year.

The full list of this year’s investigators is at 2016 Office of Naval Research Young Investigator.

On May 20, 2016. Posted in College of Engineering and Computing, Featured, Mechanical & Aerospace Engineering, People