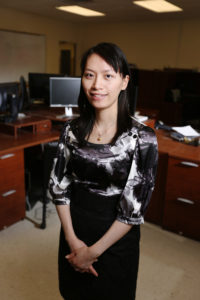 For the second consecutive year, an interactive summer workshop to promote cybersecurity awareness and educate Missouri K-12 teachers takes place next month at Missouri University of Science and Technology.

The “GenCyber” camp is sponsored by the National Science Foundation (NSF) and National Security Agency (NSA). It’s part of an NSF/NSA program to educate K-12 teachers about the need for more cybersecurity experts, and Missouri S&T is the only university in the state to host the camp. There are 73 camps sponsored throughout the country this year after 43 in last year’s pilot program.

With the GenCyber camp, the NSF and NSA are trying to fill the need for cybersecurity experts in government agencies and private industry, and they hope to hold 200 camps around the nation by 2020.

“Most camp participants do not have programming or computer science backgrounds, so the camp will show that the field is not hard as long as you are willing to learn and have proper training,” Lin says. “If computer science and STEM (science, technology, engineering and mathematics) fields were introduced at an earlier age to students, they would be more willing to join the field. Once students are entering college, many are intimidated by cybersecurity or think the field is too hard to enter.

“Cars and even planes can be ‘hacked,’ and a major strike against U.S. digital infrastructure like power grids or large banks could be devastating to the country,” Lin adds. “This is why cybersecurity must be brought to the forefront of education.”

On May 19, 2016. Posted in College of Engineering and Computing, Computer Science, Events, Featured