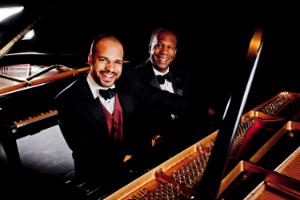 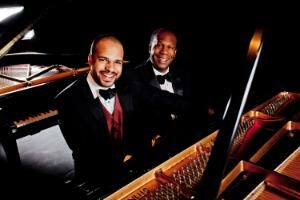 Donald and Barron Ryan, touring father and son pianists, will share their classic and contemporary performance style at a concert entitled “Music by Mavericks” on the Missouri University of Science and Technology campus this May. This is the last performance in the 2015-16 Leach Theatre season.

The duo, dubbed Ryan and Ryan, will perform at 7:30 p.m. Friday, May 6, in Leach Theatre of Castleman Hall, located at the corner of 10th and Main streets in Rolla.

Tickets for the performance are $25 and can be purchased 9 a.m. to 4 p.m. Monday through Friday from the Leach Theatre Box Office, located in the vestibule inside the main entrance to Leach Theatre, facing 10th Street. Tickets can also be purchased online at leachtheatre.mst.edu/leachspecialperformanceseries/ryanandryan/.

A native of Trinidad and Tobago, Donald Ryan came to the United States to study music and has since been inducted into the Oklahoma Jazz Hall of Fame. He has been named one of the most accomplished pianists in the world as a Steinway Artist. His son, Barron Ryan, has been a featured soloist at the Tulsa Performing Arts Center, among other venues.

As a duo, the two pianists blend old and new styles of piano to create a unique listening experience. Ryan and Ryan perform classical pieces, but also perform jazz and ragtime improvisational pieces.