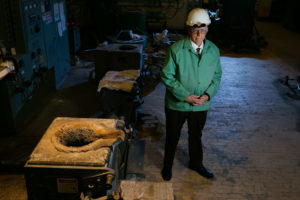 Missouri S&T professor Von Richards’ work in the classroom and in the steel industry earned him the Thomas E. Barlow Award from the Steel Founders’ Society of America.

Dr. Von Richards, Robert W. Wolf Professor of Metallurgical Engineering at Missouri University of Science and Technology, has been awarded the Thomas E. Barlow Award of Honor from the Steel Founders’ Society of America.

Richards’ research has been in casting steel in a variety of ways to make products for industry that need little machining of the finished item, saving time and expense.

The processes used is for “products that people in industry could use right away,” Richards says.

One project Richards worked on was for the Department of Defense, forming high-strength steel to make a large-bore gun.

Through the various casting methods, Richards can make products from jet engine parts to automotive door frames, from high-strength bolts to small engine components, from items weight 300 pounds to those less than a pound.

Richards credits his students through the years who have made a difference.

“A lot of the credit goes to the students we have here because they have the work ethic to go on and become leaders in the industry,” he says. “It’s really our most important product — our students.”

Former students work at Mercury Marine and Metaltech, he said, and in foundries across the country.

The award is to provide recognition of people who have made distinguished contributions to the Industry. In 1972, the Award of Honor was renamed the Thomas E. Barlow Award of Honor in recognition of the activities of T.E. Barlow, SFSA executive vice president from 1965 to 1971. The award includes a scholarship to be awarded to the university in Richards’ name.

“The SFSA does not give many awards to academics,” Richards says. “Most are in industry.”

On January 21, 2016. Posted in College of Engineering and Computing, Featured, Materials Science and Engineering, People